Sweet Spot Base versus Traditional Base plans

No worries! Discovering that PE had returned explained the difficulty that I’d had maintaining a structured regimen and level of fitness during the preceding months (i.e., the beginning of 2017). During the ensuing months, it delayed my return to structured training. Otherwise, the total time during the past three years when I wasn’t riding at all probably amounted to a couple of months. But for the latter half of 2017 and all of 2018, I rode without any particular objective. Now that I want to get faster again, I’m just trying to make sense of how my body is responding so that I can make the appropriate adjustments.

George - check this out. I created three separate custom charts in WKO4, that show different polarized views of my training. I can filter this by training season, year, month, week, even a single ride or race.

I am experimenting with three different charts.
1) Polarization reported based on % of Max HR: This is based on Joe Beer’s method, but rather than defining his Zone 1 as anything below 80% of max HR, I followed his suggestion on his podcast discussion, where he says we should’t be pushing that upper limit, and I drew the line at 75% of Max HR.

2) Polarization reported based on FTP (I think you had suggested this): In this report, I am defining the left end of the polarization as anything under Sweet Spot (83-97% of FTP). I’ve seen varying definitions of sweet spot, some at 85-95% of FTP, but I decided to go wit the broader range). I could even go lower, as in 75% of FTP, depending on how polarized I want to get. I would vary this depending on what’s going on with the right side of the spectrum. Typically. the more HIIT I do, the more recovery I need, thus more Z1 and very low Z2.

3) Polarization reported based on % of VO2max. This is not VO2max based on our FTP and the Andy Coggen zones, rather this is based on an actual WKO4 algorithm that calculates VO2max of the athlete. So this data was already created in a canned WKO4 report, but I had to get help to create a new one that shows it in chart (bin column format). But I also have a lot more data in the report version, This report defines the far left of the polarization as anything under 65% of VO2max. BTW, that ends up being close to max HR.

So, we’re talking 65% of max HR, which is more conservative than Joe Beer’s 80% max HR. You can note that the charts are not that different.

So overall, reporting on my entire 2018 season, these don’t tell me a lot because my training approach is changing throughout the season. But I could report on data ranges that align to base, build, specialty, race, etc, which would provide some interesting insights.

Polarization by % of Max HR 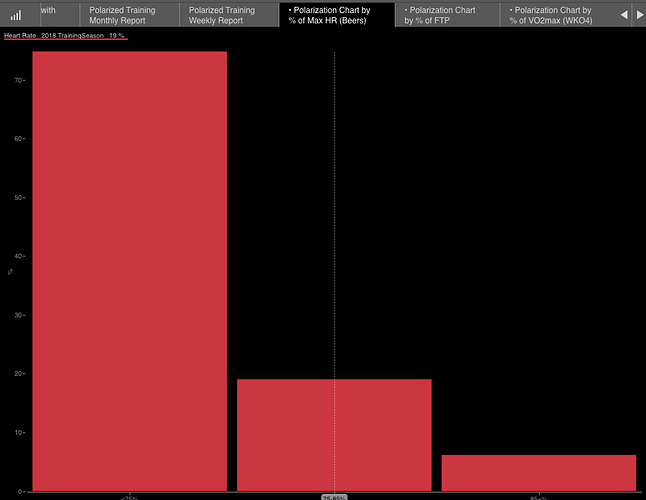 Polarization by % of FTP 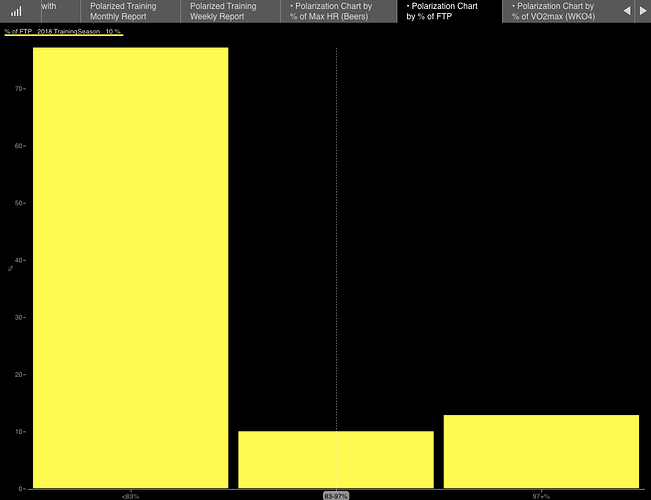 Polarization by % of VO2max (not defined by FTP zones) 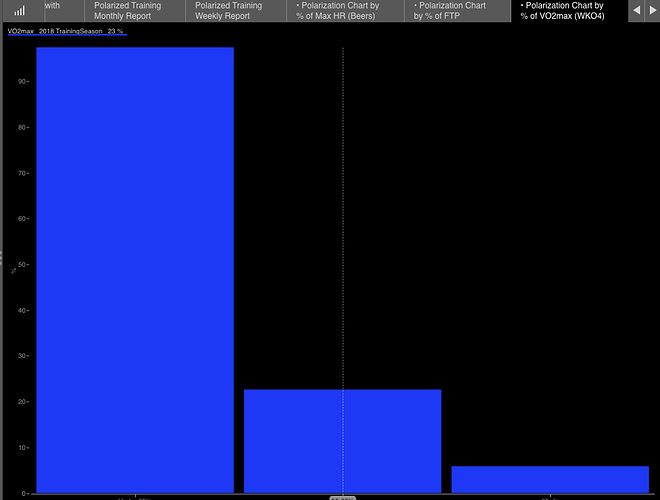 When did Nate suggest doing the Ramp Test that was due in week 1 of SSB2?

One of the things to note with WKO4 is that unless the model is well populated with maximum efforts, some of the metrics may be way off the mark. Unfortunately training in a polarised way doesn’t always populate the model very well unless you’re either actively racing or going out and doing the efforts.

Having said that I’d be interested in you charts…

All I know is what is in the links. So I just kept it at the beginning of that week. It means taking the test in a more fatigued state, but I am OK with that. 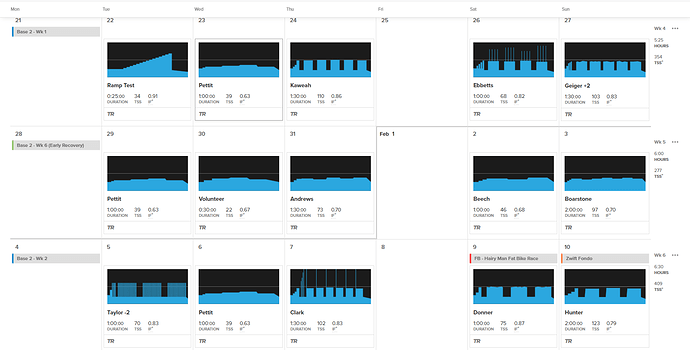 I’ll go with the fatigued version

What’s funny… is that now I look at it, I may swap and do the other option I shared

Here is what I would do:

That doesn’t automatically make it good though. Essentially the model only looks at the last 90 days to determine you’re current state. If you’ve training in a polarised way there will be gaps in the best efforts between the top end of zone 1 and the bottom of zone 3 that gets populated with non-maximal efforts. These can affect the accuracy of the model quite a bit.

Not saying that your data isn’t good, just that that is a potential pitfall of using WKO4 with a polarised training model.

Essentially the model only looks at the last 90 days to determine you’re current state.

I’m not sure what you mean. In WKO4 you can run a report by any time range you want, 5 years, 1 year, 1 month, 1 week. I can run the report on a single workout, or jus my base phase, or build, or a single race, or just my race season, etc. The model looks at exactly what I want it to look at.

You’re current mFTP is based on the last 90 days.

These polarization reports are not based on mFTP. Do you want me to send you the expression code for all 3? I think you are misunderstanding what they are calculating.

That would be good. I’ll PM you my email address so that you can send me the chart file, if that’s OK.

The point still stands that no matter what range you’re working with, the MMP curve has to have good data otherwise the VO2max calculation will not be accurate, as it’s based entirely on that curve.

Ditto that. Not a concern on my end. I’d track % of FTP required for thinking if I could figure out a way to do it 24x7.

I thought I heard them say you should test after the rest week. so you can always swap it with taylor, doing a VO2 workout instead of the ramp test for your third training week.

Wow! This thread has taken on a life of its own, and morphed into something I hardly recognize. Apparently, this is a subject about which many are passionate. Ultimately, however, I still have a decision to make. Once the discussion went off on a tangent, it was over my head. If I understand it correctly, we’re talking about periodization versus polarization. I do have a license for WK04, but haven’t used that application in years. I did purchase a digital version of the book “Fast After 50.” I’ll take the threshold test tomorrow. Based on the results, I’ll determine whether I need more time off, or whether I can continue training.

Yup, hence the reconsideration of my initial statement and implementation of Nate’s instructions, and swapped workouts around. See my revised schedule below (swapped Taylor -2 and the Ramp).