He rides a lot at around 2500m, which translates to a 10-15% drop compared to see level (to throw out a rough ballpark figure). So for low intensity stuff not too much. However, the ability to recover is affected as well. Given his high volume he may have to pay attention to keeping it fairly easy.

Makes it all very difficult to compare it to others. 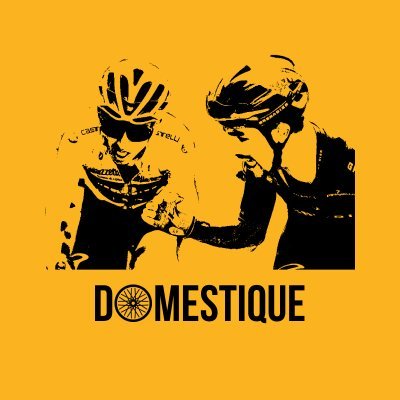 @Domestique___
#DomestiqueData by @LoosDieter The Lotto Dstny riders who are currently in 🇪🇸 Spain did a 5' & 20' test. The Classics squad also did 3x 30" sprints afterwards. Here's a table of the 5' & 20' tests. In this thread we'll analyse the results. 👇 https://t.co/zMs3yME9Ku 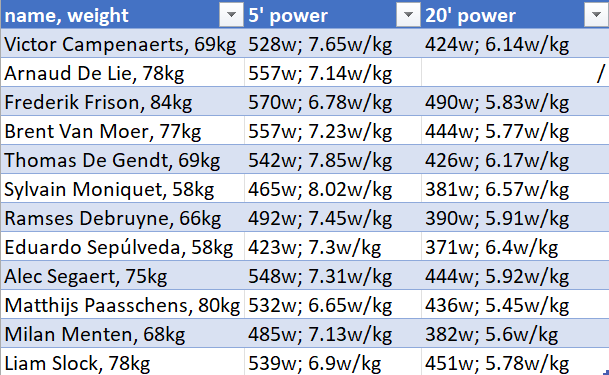 Quick, somebody multiply by .95 and tell me who is going to win the race!

Plot twist: the race is a 20min climb!

Since this was posted today, my money on Monday’s 20min climb race is this guy:

Nice numbers but it only shows how high WT level really is, half of these guys could not be seen in any of higher level races last year and I do not expect it to change this year. Would be very interesting to see their number after some kjs, how much would they be able to retain of fresh numbers. Or are these already after some work?

Hoping for even better season for De Lie and classics (more like semi classic) win for Campenaerts.

My apologies for bringing up old news, but as a fairly new cyclist (one year of free riding and just recently got on TrainerRoad and structured training) I don’t really have great insight in cyclists capacity, what is “normal” and what is exceptional etc.
In an interview with Dr Stephen Seiler, the Swedish skater Nils Van der Poel mentions he did 90 minutes at 404 watts during his training for the Olympics, - in one consecutive go. And he regularity did the same wattage at 60+ minutes.
To me, those numbers just seem totally insane! 90 straight minutes at 400?

My question is, how would those numbers compare to professional cyclists? Do we know?

Holding ~5w/kg for 90min is basically world class. Not many people can do that. Many Tour de France riders have hour-powers approaching or exceeding the 6w/kg threshold though.

However, he is also heavier than your typical TdF athlete, so it might be better to compare to a cyclist specializing in something like 1h TT, where absolute power is more important than w/kg.

Holding ~5w/kg for 90min is basically world class. Not many people can do that.

NvdP’s 90’ is pretty world class. When you construct CP models from the Lotto Dstny riders shown above and estimate for CP90 you’ll end in a similar region.

HOwever, one difference will be that world class cyclists can do this after 4h and repeatedly. Not sure about NvdP.

After seeing all this training data from the pros (thank you @sryke), it made me think about VO2 max training. I don’t see any pure VO2 workouts/blocks (maybe I just didn’t see it, please correct me). Is it because of the volume or maybe it adds to much fatigue?

All the race days maybe contribute to high intensity than they would for an amateur doing far fewer races.

I don’t see any pure VO2 workouts/blocks (maybe I just didn’t see it, please correct me).

George Bennett has an interview a few years back where the interviewer (FastTalk) asks: “what about VO2 max work intervals?” Bennett replies: “I don’t do much VO2max work interval work” [emphasis mine, but his answer was firm]

He does contrast himself with “two other guys” who evidently do “repeated intensity to get the numbers up”.

**I looked up the interview, and edited above for literal accuracy. Pro Training Tips, with George Bennett

Can it be also bcs cost/benefit considerations for already developed engines?

Can it be also bcs cost/benefit considerations for already developed engines?

That is what I meant by “already high VO2max”, when I should have said already at genetic limit of VO2max. :-). So yes.

so what exactly defines the genetic limit of your maximal oxygen uptake?

Formally, I don’t know and not sure how you would ever know.

Informally, you have a high VO2max, on par with other top level athletes and all the training you do (world-class level volume) doesn’t increase it. I would say, for example, Greg Lemond reached his genetic potential for the day/era.

For amateurs (not what this thread is about) it’s easy: you haven’t.

Before this conversation goes sideways, a quick caveat: no, high VO2max is not the most important determinant of success in endurance sports, but I would say it’s “necessary but insufficient”

so what exactly defines the genetic limit of your maximal oxygen uptake?

Here I quote the great Ben Levine, expert in this topic:

“ Elite endurance athletes have a high VO2max due primarily to a high cardiac output from a large compliant cardiac chamber (including the myocardium and pericardium) which relaxes quickly and fills to a large end-diastolic volume. This large capacity for LV filling and ejection allows preservation of blood pressure during extraordinary rates of muscle blood flow and oxygen transport which support high rates of sustained oxidative metabolism. The magnitude and mechanisms of cardiac phenotype plasticity remain uncertain and probably involve underlying genetic factors, as well as the length, duration, type, intensity and age of initiation of the training stimulus”