I want to try this process in contrast to my 3 prior years of using the TR SST approaches.

Did you consciously decide to try this as pre-base prior to starting TR SSB? Not sure if that is what you meant by TR SST approach. To my eyes, the TR general build and road race speciality phases have a lot of work above FTP (VO2Max). The TR build/specialty plans with a lot of SST have it because the A event is going to be raced at SST.

Did you take time off from cycling between seasons? I see some pretty high-intensity stuff in the four weeks prior to starting POL.

Just wondering as the study I keep referencing had national level athletes do a detraining period of 4 weeks prior to starting the 9 week study. And classic base training is preceded by time off. I’ve seen more traditional base training (with sprinkling of intensity, so you can call it POL) work on members of our club, from newbies to guys using it to move up categories. I firmly believe POL at some # hours per week will also deliver a wider aerobic base, just not sure how many hours are required.

For whatever it’s worth, anyone that has a Tacx trainer (and maybe any FE-C? I’ve never tried it.) can do HR-controlled workouts using the Tacx Training app. HR response is slow enough that the control loop isn’t great but it does work.

I’m not smart enough to figure out what the axes represent on that chart.

Great questions. Here is a pic of my year at a glance: 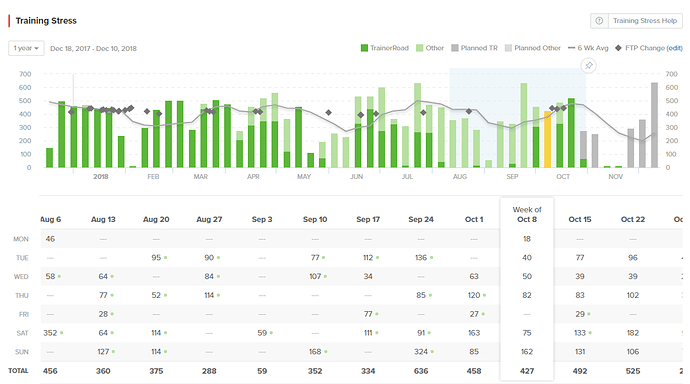 Did you consciously decide to try this as pre-base prior to starting TR SSB? Not sure if that is what you meant by TR SST approach.

Did you take time off from cycling between seasons? I see some pretty high-intensity stuff in the four weeks prior to starting POL.

Just wondering as the study I keep referencing had national level athletes do a detraining period of 4 weeks prior to starting the 9 week study.

My point in sharing this was to maybe help others decide if they think it’s worth a test for themselves, even though I don’t think this is anything close to a “proper” or “full-depth” analysis.

I plan to contrast it with my experience when I roll into my normal SSB1 in mid-Nov. Things like general fatigue level to TSS will be interesting to see (again, very personal), but I think there are likely to be differences in overall feeling based on what I have learned in the work weeks.

I am about mid way through the recovery week. Right now, I am getting through the easy workouts with nice and low HR, but I do feel some fatigue in the legs that I wasn’t expecting. So it’s interesting at the very least.

I plan to contrast it with my experience when I roll into my normal SSB1 in mid-Nov.

Honestly have a hard time seeing the value in that, given the vastly different preludes to POL and SSB1, but I’ll grab some popcorn and keep reading along.

Honestly have a hard time seeing the value in that, given the vastly different preludes to POL and SSB1, but I’ll grab some popcorn and keep reading along.

Yep - now that you mention it, I recall seeing that Tacx has this capability. It’s a capability TR could also add pretty easily if they decide to do it. But it would start to deviate away from their “power is king” philosophy - which I generally agree with, but I also think there’s ways to incorporate heart rate in a valuable way - eg for pacing like this, or looking at HR decoupling during rides, etc.

I’m truly enjoying the discussion, and how its helped me go back to the stack of training books and re-read stuff to plan my 2019 progression.

Agreed. If nothing else, it has allowed us to stoke the POL fire while we consider it along with our other options… and wait for the deep dive into training info that TR will hopefully deliver… to mess it all up

Thanks for the great questions and discussion. Interesting stuff.

I’m planning to use a POL approach for the summer, when a) my body is ready for all the intensity, b) its too hot (for me) but the sun is up before 6am so its easy to go on long 3-6 hour low-intensity outside rides and still be home at a reasonable time on Saturday morning.

Hopefully this is it

Xert Users | Fat/CHO Garmin app: I like to use this for my long fat burn rides

Fat/CHO Garmin app: I like to use this for my long fat burn rides. However since my last breakthrough a couple of weeks ago it's giving some very strange results. I'm entering the "fat burn" zone at...

I generally agree with the “power is king” philosophy as well, but from my reading, listening, and thinking I believe this is a specific exception to the rule.

For the “80%” rides in a polarized plan, as I understand it, you’re actually chasing a metabolic goal, not a performance one. In other words, during threshold intervals for example, the goal is to spend time at threshold power so it makes sense to ride based on power. With these polarized endurance rides, the goal is to stay below LT1. Unlike most training rides on a bike, power is completely incidental to the goal of the ride. Seems to me you want to ride based on the goal you’re chasing so riding to HR, since we can’t really measure LT real-time, rather than power makes more sense in this case.

Those are just the benefits that appeared to be relevant to the base phase. It also does things like improves your VO2max, as well as a bunch of secondary effects that are improved, but not as strongly as when performed in other zones.

From that perspective, if the point of base is to prep my body physiologically to prepare for later training stimulus, then I want all of those adaptations. There’s a mix here of central and peripheral effects. And it’s laying the foundation to later increase FTP, without needing to do so at the current time.

In fact, if you look at the differences between the expected adaptations between aerobic and VO2max, there’s a ton of overlap. Most of the points either both have approximately the same “level” of impact, or VO2max has a greater impact.

IMO, one of the biggest fundamental differences which isn’t accounted for in that chart, is that you have a relatively limited quantity of VO2max work you can do in a given week, before you run into fatigue issues. Whereas, you can do a TON of aerobic work, and still see benefit.

Anyway, that’s a long way of saying that I don’t think there’s any “penalty” for doing VO2max work during base from a physiological perspective. There may very well be a psychological benefit, if you do a lot of high intensity work throughout the year, and just want a break. That last bit goes both ways though, as having a single high intensity session a week can help break up what can otherwise be a somewhat dull base phase.

That’s not to say it’s required, as clearly it is not. There are lots of people who typically avoid all high intensity work during base, and still perform at a high level. I’d love to see more data actually doing a thorough analysis. Most of the data that I have seen has been either narrow in scope, or more broad like the recommendations in the article I linked below. 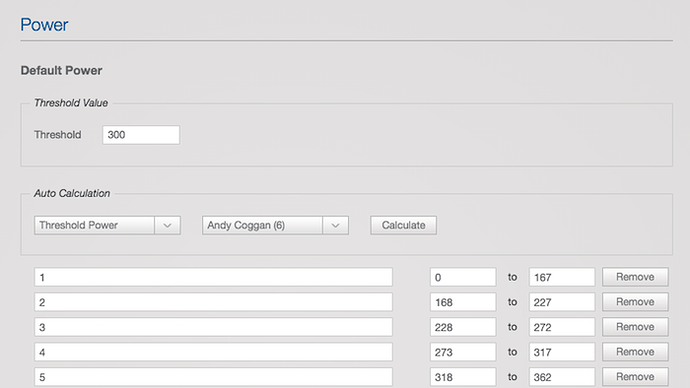 Setting the correct cycling power zones is critical to improving as a cyclist or triathlete, as explained by Dr. Andy Coggan in this comprehensive guide to setting zones.

I agree and use the power threshold to make sure I don’t overdo the wattage whilst the HR catches up and then invariably overshoots.

If you take a look at Dr. Coggan’s expected physiological adaptations, he states that VO2max will provide strong benefits to:

I have knee issues, and wasn’t making a general statement.

This is definitely n=1 stuff that only applies to me… By “enough experience” I’m pulling in a lot of things that I’ve discovered over the last 3 years. The bottom line is that my knees require a slow build up to perform high-intensity work without incurring setbacks. My training calendar is filled with 1 or 2 week recoveries with no cycling, because of my knees. Sometimes the cause is cycling, a couple of attempts at squats in the gym, and other times dumb stuff like hitting knee in garage.

That makes a lot of sense from your perspective then. I think the way I read it reminded me of the old “high intensity will un-do your base training” perspective, which was mostly the angle that I was looking at it from.

My current thinking on a rough progression:

It’s largely driven by our club’s series of 10 century rides starting in January, my interest in climbing rides in mountains, and wanting to hang with the lead group on windy Wed night rides. All of them require a lot of absolute power over 20-120 minutes.

I am looking at the same TR progression, but MV:

Last year I did this: