Just started watching. I see a team USA kit in the front group, but can’t tell who it is.

Scott McGill is in the break but that of course is doomed. I’m reasonably sure the peloton will come back together too, just curious really.

Scott McGill is the one in the breakaway.

If he doesn’t just smash it through one of the feed zones, I’ll be a tad disappointed

And McGill is sitting at the back of the break not rotating through. What’s the strategy here with 190km to go?

Super ride as far as I’m concerned. Swenson is a great athlete with a big engine but I’m afraid you cannot compare gravel to the WT….the way races are ridden and the average level is just insane.

I’d say he has the potential to ride at this level and do a job but I don’t see him winning big races.

Well, that’s that. Good on them all for a hard race. I think many witnessed what was expected. He got really good TV time on the very back of the peloton for some parts. Check that box. But when the pace really happened…um, yeah.

I’d say he has the potential to ride at this level and do a job but I don’t see him winning big races.

Sorry, with your edit you forgot to replace the word “big” with “any”. Or just leave it out. 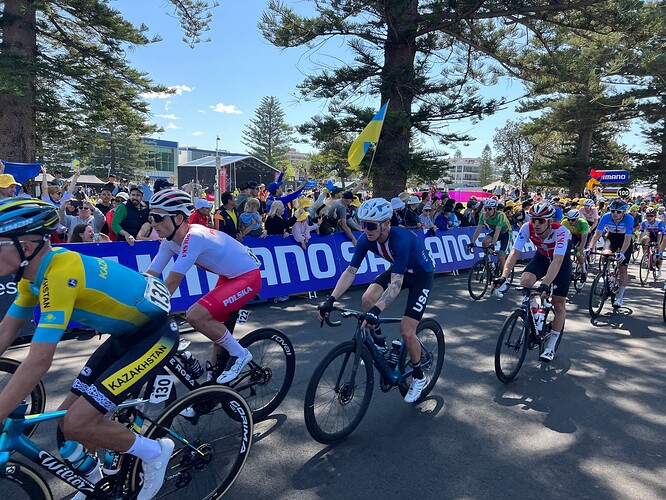 After reading all the Americans fight it out on this thread for the past two weeks, figured I could at least post a picture of the source of controversy. I think this is him, right? This was just in front of finish line as they crossed for first formal city lap. Looks comfortable. At this point everyone was taking it fairly easy.

I think also it’s ok to reflect on the forum’s enthusiasm of the US Gravel scene, the fanbase of the TR podcast and its common voices, and simply be ok with this particular moment not living up to that hype and enthusiasm.

Keegan is a wicked and talented bike racer. No question.

The gravel scene is amazing to watch develop and continue to attract more and more people from road and MTB together at great events.

The ex-pros in gravel, the privateers, the mixing of these individuals into events with amateurs, is also great, inspiring, and keeps cycling as a unique sport where fans and heroes can be shoulder to shoulder.

The gravel scene however is simply not the pinnacle of cycling’s very best super humans. It just isn’t. It is what it is. If someone, anyone, wants to put their talented big engine on the world stage with the world’s best, the US gravel scene is not going to be the place. And that’s totally ok.

I think Keegan did pretty well placing 75th, only the second race he lost this year. Have to give the guy some credit for being out of his comfort zone in a country on the other side of the world.

If we are being totally honest, the fact that he finished at all and didn’t withdraw is really mind-bending. He’s a freaking fitness monster.

169 people started the race and he finished 73rd….

A really impressive result in my opinion. He has never raced road at an elite level and he clearly wasn’t over his head racing against the best in the world. It’s hard to believe honestly.

Have to give the guy some credit for being out of his comfort zone in a country on the other side of the world.

Just like 90% of the rest of the field, not from Australia/NZ. Definitely out of his comfort zone for racing at a level over his current experience.

A really impressive result in my opinion … It’s hard to believe honestly.

Mmm, i don’t think that it’s hard to believe, nor is it truly impressive at all actually. He finished, as expected (it’s a long race and the distance was in his wheelhouse). He did, literally, nothing in the race except follow from the back of the peloton or from within the group that was dropped and he ended up in. As expected.

The notion of making an impression for a potential discussion with a team at the WT level is out the window, from what i can discern. As expected.

Looking forward to hearing about Keegan’s experience. Hopefully @Jonathan will get him back on TR Podacast to discuss.

It was also pretty cool seeing Scott McGill up in the break for quite a while. Similar to Keegan he was called up late to participate. He’ll likely give his full breakdown on the BonkBros podcast in the next week or two.

Mmm, i don’t think that it’s hard to believe, nor is it truly impressive at all actually. He finished, as expected (it’s a long race and the distance was in his wheelhouse). He did, literally, nothing in the race except follow from the back of the peloton or from within the group that was dropped and he ended up in. As expected.

I don’t think everyone expected him to finish. It’s not like this was a flat race where he rolled in for an “easy” pack finish. I personally think it’s crazy impressive for someone with zero experience racing at this level to finish where he did on that course. To be fair, I have not watched the race, so maybe he was just hanging with a group off the back that was taking it easy, but it looked like they weren’t that far back and he had some serious names with him. Maybe I’m easily impressed. If someone is riding the bench in the nba or nfl, I’m impressed that they can compete at that level even if they aren’t the stars. The vast majority of riders at the wt level never sniff a podium, will never ride in a grand tour, and rarely affect the outcome of a race. I’m still impressed if they get to that level and can make a living racing bikes

Keegan finished ahead of Wout Poels, Marc Soler, Tobias Foss, Florian Senechal, Ben Turner and Connor Seift to name a few. I didn’t watch the whole race so don’t know how much those others guys were working. But still, that’s impressive. Being in the top 50% even if you never take a pull is something for a guy whose never done a WT race.

Looking forward to hearing about Keegan’s experience. Hopefully @Jonathan will get him back on TR Podacast to discuss.

Totally agree, this will be a good discussion that im sure many will be interested in hearing.