So I did Macian outside (4x4 at 110%) today. The intervals seem offset in the post ride graphs in TR. They are time shifted such that they start too late and end too late thereby not recording the actual work interval. They show it ending 30 seconds after my rest interval and thus the avg power is about 20W too low. I went to the analyze online version and dragged on the graph to isolate the work range to confirm. I also felt underreported in the summary based on my power readings while performing the intervals live.

Has anyone seen this? I feel it feeds bad info into AI. I exceeded the top end easily of the power ranges prescribed and also feel AI FTP has me too low to boot. Is that possible based on my ability to do 4x4 at 115% (according to my AI FTP) without difficulty? I got zero bump in levels. Partly due to low recorded avg powers maybe, and I did also rate as moderate thinking it was easy for what should be a tougher set by definition. 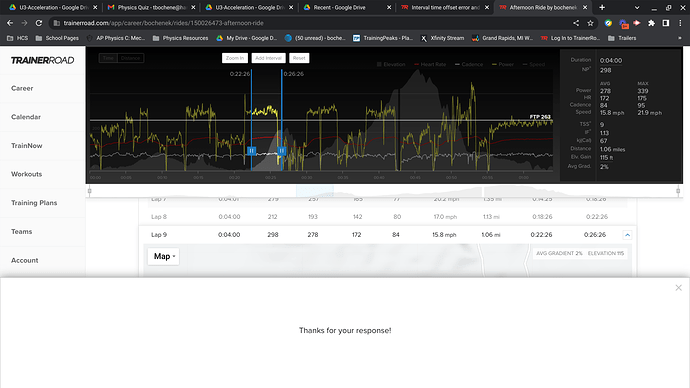 The image is a screenshot of one of the intervals. I clicked on one interval and TR highlighted the interval on the graph. I did not manually define the range that is visibly offset.

I know I threw a lot against the wall here, so hopefully it makes some sense.

It would help if:

reported this to TR support

Second this, hope it solves itself!

I did add a screenshot. Looking closer, it looks like it’s literally 30 seconds off.

I got zero bump in levels. Partly due to low recorded avg powers maybe, and I did also rate as moderate thinking it was easy for what should be a tougher set by definition.

Given this is an outside workout, TR support would need to dig in and see what happened, if they can get enough info from the FIT file. Make sure to include the head-unit, etc. with your support ticket.