Today while riding in Girona, I had a brand new (200km) GP5000 Transparent explode with a latex tube in it - back wheel. Here’s what happened:

Took it to a bike shop nearby and the guy reckoned it was a tire failure. However, my question is, does the lack of rubber on the sidewall agitate the latex tube somehow and should I change the front tire back to a regular GP5000 that I’ve run (several) for 12000km with no horrendous explosions? 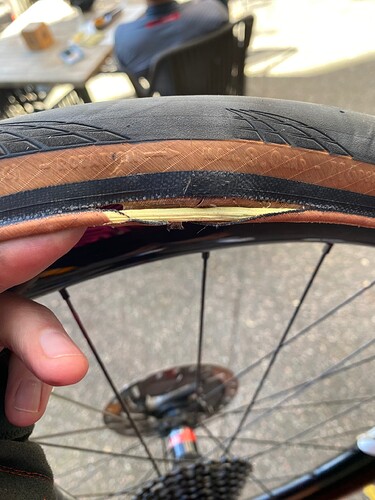 Riding with a friend a few years back and similar story - right before a decent - Michelin Pro 3 blew out just like that. They gave him a new tire.

I assume it was a tire defect

What rims do you have? There were some rims - I forget which ones, so not going to guess - where the edge of the rim was sharp, and had a tendency to slice the bead from the rest of the tire. Which is what it looks like happened to you.

This is why some of the rim companies only said they were compatible with specific tires.

I have Light Bicycle AR56 rims, I’ve done 10000km on GP5000 regulars with them so I’m not sure - maybe the translucent are specifically causing an issue?

Are you running these within the max pressure guidelines? I couldn’t find anything on tire compatibility, but the photo - at least to me - looks pretty clearly like something “cut” the tire where it came apart. I don’t see lots of threads and it looks like a pretty straight, which isn’t what I would expect if the tire tore at the bead.

Looks like the tire casing separated from itself where it was folded over the bead. On the “Transparent” tire, there’s clearly not much rubber there, so it’s probably more likely for there to be a flaw.

I don’t think your tube failed first; rather the tire failed, the tube squeezed out of it (that’s your ffp-ffp-ffp noise, riding on the damaged tire and tube.) and then burst.

Thanks all! I was running at 75-77psi fwiw. I switched back to the regular gp5000s. Continental are ‘looking into it’ but ProBikeKit refunded me immediately. Great people there

this makes perfect sense! Thanks for your response