I was thinking of stepping my game up and getting a squat rack. Because of this, I was wondering what an inexpensive squat rack and bar bell set up. I only really want to squat and deadlift and was wondering if anyone had any tips!

Thanks in ahead of time

Bar and weight plates will be best/easiest sourced locally. If you aren’t fussed about getting an olympic set then you will often find 1" sets being sold second hand on whatever your local second hand sales webpage is.

I bought this rack from newyorkbarbells in 1997. I still use it today. I think I paid more for it so maybe this one is lower quality?

At the time I wanted to create a place where athletes who wanted to compete in stength athletics DRUG FREE could train & socialize with like minded athletes. I asked ‘members’ to sign a waiver and pay for a piss test but otherwise did not ask for dues or membership fees…so we were on a budget. Most of the equipment we built ourselves & most of the stuff we built were constructed similar to the plans you can find in this book:

The plans in this book were passed on to me for free before JV passed but I assure you the book is worth it’s modest price.

As to the barbell, I would not scrimp! I have a couple of Chapman barbells and some PDA dumbells. Sadly, I believe Mr Chapman and Mr Szimanski have passed as well. I think Chapman fabrication still exists but I don’t think they sell barbells anymore. So I don’t have any good advice here.

That’s perfect for what I want to do. Sadly I can’t get that rack in the states! 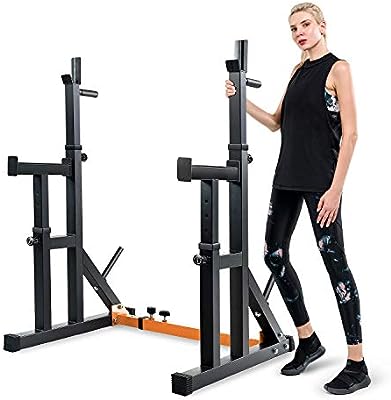 This appears to be the same thing branded differently. If you have the space a power frame like @Brennus linked above would be nicer to have but it does come down to the space available.