(Can’t think if I’ve started a thread similar, sorry if I have!)

Anyway, another workout tonight, initially things ok but as things progress I’m finding that the latter intervals have me pedalling like a manic to hit power. I think then the higher cadence makes things even harder to bring to balance. 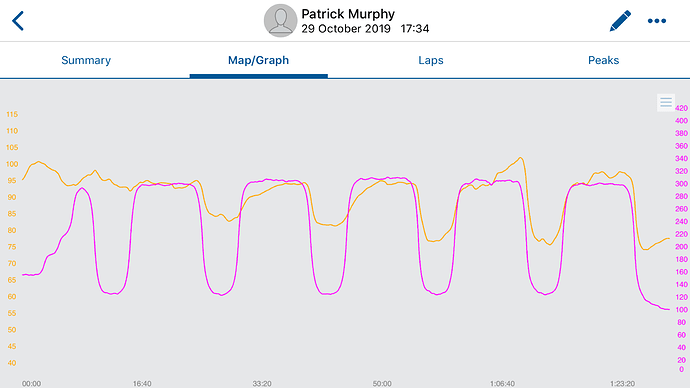 The last 2 are just insane, how can I keep things at a lower RPM when this happens?

Presumably you are using ERG mode (based on the “power match” comment in the title)?

Are you watching and attempting to control power directly, or simply trying to hold a particular cadence and letting the trainer & app control power?

It would have been interesting to see what the power would show if you had restricted your cadence instead of increasing it.

Great reply Chad, next workout I’ll focus on cadence and see how things react. (I was doing what you thought and compounding the issue).

It’s a common mistake. Coming from a manual resistance trainer, we are used to watching power and adjusting cadence slightly to hit the power target.

Once you switch to ERG, you have to reverse that thought process. Here are my comments from similar discussion:

Cadence is king. Focus on holding your cadence as smoothly as you can, at your desired cadence. If you are not steady, you are making the app and trainer work harder to hold the desired power target from the workout. So, make sure to pedal with intent to hold your cadence above all else. Ignore power… let the trainer and app do the work of setting the resistance to reach and maintain the power target. This includes changes up and down in the workout. Let the trainer and app make th…

The only time I ever purposefully slow cadence in ERG mode with Powermatch is if power being maintained by trainer is above target. Slowing cadence by 10 or so temporarily seems to get it to re adjust. Otherwise I just hold cadence around 95 as much as possible which is (now) comfortable for me and hope for the best

I tried focusing on cadence last night and not reacting to the power numbers, I just let the turbo and software do its thing, it’s not without it’s challenges but the main intervals seemed to align better as the session wore on. The first interval after a recovery bit is not always that great but I think I’ll stick with this way of thinking and see how it goes.

Not sure if my sessions are visible but here is a screen shot of what I did last night, the power lines look good and the interval breakdowns are pretty close to target for the most part, some under, some over.

Nice work. Based on the pic, I’d say you are doing better with cadence focus.

Yes, adjusting to the increase in resistance at the start is a bit tricky. You fight the power a bit and it alters cadence. It creates a short yo-yo effect but you just want to work on holding your preferred cadence it it will settle down.

Keep up the good work, I think you are pointed in the right direction now.