Calves ain’t having it

So I know this is a shot in the dark but I have a high deductible plan so I’m ready for medical advice over a forum of strangers. You all seem like a good bunch.

I noticed some tightness in my right calve lately and kind of ignored it for a while. It’s the feel of when a muscle feels tight like it’s going to cramp but it doesn’t get that far. I hit it with my theragun and boy it felt even tighter right after. It’s definitely tender when I hit the side of my calve. I did it to my other calve today and it had a similar effect. Strange. Not painful otherwise,though. Just tight. Anyone experience this? Riding doesn’t seem to be painful at all just doesn’t seem to help.

Just more or less curious if someone has had a similar issue or experience. Never had anything like this.

Had problems with tight calves for 20+ years, all the way back to my basketball days.

When I turned to cycling this manifested itself as ride ending cramps during hard workouts.

I’ve all but solved the problem using calf compression sleeves and most recently mid-sole cleat adapters that allow me to almost eliminate the calf muscle from the stroke. A small cheap massage gun is vital too.

Check cleat position. Maybe they loosened up and shifted a touch. If this is the case move them back on the shoe so you’re not recruiting the calf as much.

My daughter runs in college and also struggled with tight calves as you described. The team trainer recommended the following: Prior to any run, she will use massage gun for a bit and then run. Following a run, she uses a slant board as shown below. Here is a link to that one that we purchased. Of course, you don’t really need an elaborate board, but we purchased the same one that the team used. A wall stretch or other variations would probably suffice. The above has helped tremendously. Additionally, she does self massage on the calves (along the muscle and cross friction) when just sitting a watching television. Pamper yourself with a deep tissue massage. 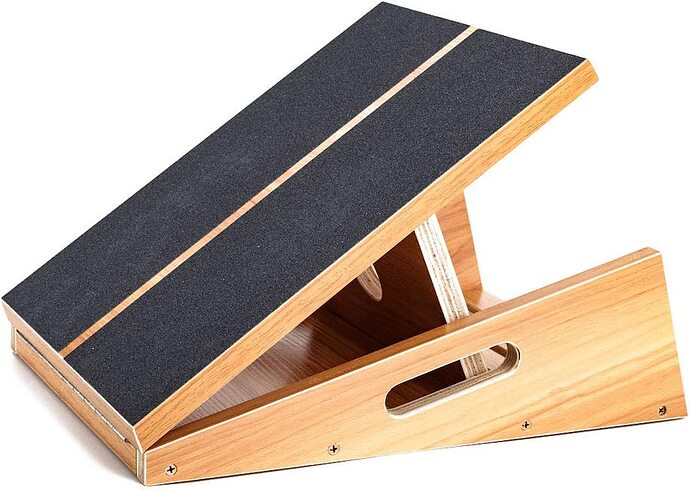 As I will often say…nothing beats going to a good physiotherapist.

When I started riding my shins and calves were the areas I always struggled with. Physio definitely helped me. It wasnt just from the work they did but from ensuring I was using the proper form to do the stretches correctly. I have just learned a lot from the person I go to. My whole yoga routine is a mix of the various problems I have had to deal with over the years.

If your calf muscles are tight, chances are hamstings are as well. Go see a PT for an eval and get a handful of stretching exercises to work on. If you have a look on Amazon for “prostretch the original calf stretcher”, that works as well as the one posted above, but is only $20.

As others have said, a visit to a professional practitioner might be the best place to start. When my right calf started playing up, I thought I could ‘workaround’ it. Turns out I couldn’t.

Regular stretching did seem to help but my wife’s massage gun was, in my opinion, useless.

Long story short, my right calf muscle failed spectacularly during a game of football (soccer). The pain was so intense and it took all my willpower to walk with assistance, off the pitch.

Listen to your body. I wish I had. My racing session is over, I’ve dropped my FTP by 20 watts and decided that now is the best time to slowly start my winter training.

I had similar issues, only right calf.

Ended up with 6mm cleat spacer since I had a right leg being shorter than left, so I was overextending the right left and thus overloading the calf to reach to the pedals.

Disappeared right away with BikeFit!

Disappeared right away with BikeFit!

I was going to suggest similar, from a bike fitting perspective I’d be thinking about moving the cleats back and lowering the saddle - but that’s a guess over the internet so worth about as much as anyone’s paying for it! Probably worth a visit to a sports therapist/physio/osteo etc though as well.

I was going to suggest similar, from a bike fitting perspective I’d be thinking about moving the cleats back and lowering the saddle - but that’s a guess over the internet so worth about as much as anyone’s paying for it! Probably worth a visit to a sports therapist/physio/osteo etc though as well.

Got some G8 insoles as well that made a HUGE difference in foot stability.

I appreciate all this feedback guys!

I went to a sports chiro yesterday and he said it’s my soleus. He put some tape on it and worked on it which we helped in the moment. He also told me
To keep hitting it with the theragun until I go back
To get re-taped. I can barely touch it with the theragun at first. It gets a little easier but it’s tender for sure. I do have to say after paying attention to
This spot alive realized I rarely do much with my calves. Especially that area.

As far as causes. I have had a bike fit. Not saying it isn’t the issue. Could always try again but this
Bike fit isn’t new. My cleats I did move a couple
Months ago to line up better with the bone at the bottom of my big toe. So it went back slightly. I didn’t notice much on my bike yesterday doing outdoor intervals.

I do actively stretch as much as I can. Hamstrings are probably right but I do stretch them. I will keep on that.

Those G8 insoles sound interesting. For what it’s worth I did put inserts in a couple months ago. They have a carbon insole. I can’t remember the name maybe superfeet? They were supposed to be for cycling. I had to cut them a bit to make the arch match my arch. I may check out
Those insoles though. My shoes are shimano ME7. Definitely a couple thousand miles on them but don’t really see any issues with them.

For me putting my cleats as far back as possible, thereby engaging my calves less, helped a ton. Still get a cramp occasionally here and there.
If you put your cleats rearward, lower your saddle accordingly.

My cleats I did move a couple months ago to line up better with the bone at the bottom of my big toe. So it went back slightly.

If you put your cleats rearward, lower your saddle accordingly.

These two things might be related (previous caveats about internet advice notwithstanding!)

Good point!
I will keep working on them through message and KT tape for now. They don’t hurt otherwise so I’m not going to stop doing what I’m doing.

Since reading this post I’ve been concentrating on my calves more. Like the OP they weren’t cramping fully up and I was experiencing no pain on the bike and they were just tight. However, I was experiencing a bit of DOMS in the middle of the night. Foam rolling didn’t seem to help but touch wood a combination of a cheaper massage gun and specific calf stretching is helping

Another relatively easy thing to try is ‘rolling’ your calf with the opposite shin. Kneeling with a foam roller (or similar sized padded object) under your ankle so that the foot is in a neutral position. Cross the other leg behind you over the calf and sit back on that leg. It uses the shin as an edge to apply pressure to the muscle. Disclaimer: this will probably be quite painful, especially initially.

(Source, it’s an excerpt from ‘becoming a supple leopard’)

On the stretching thing, I find the perfect ‘tool’ is the bike itself. After you’ve trained, stay clipped in and drop your weight into your heel on one side, hold for minimum 30 seconds, repeat on the other side.
Even easier after an indoor ride, as you don’t even need to unclip the non-stretching side for balance.

I’ll give this a shot! Thank you!

I brought the massage gun with Me to work today to hit it here and there. I’ll try that when I get home.

I think my right side is getting better but it’s still pretty tender when I just barely touch it with the theragun.

I will definitely be paying more attention to that portion of my calves going further! I usually just roll the calve straight on and don’t pay much mine to the inside portion

Funny I started doing this recently
When I noticed the one side was feeling tight all the time.