Which meter did you get?

I’ve already shared this here but these are some good tips: 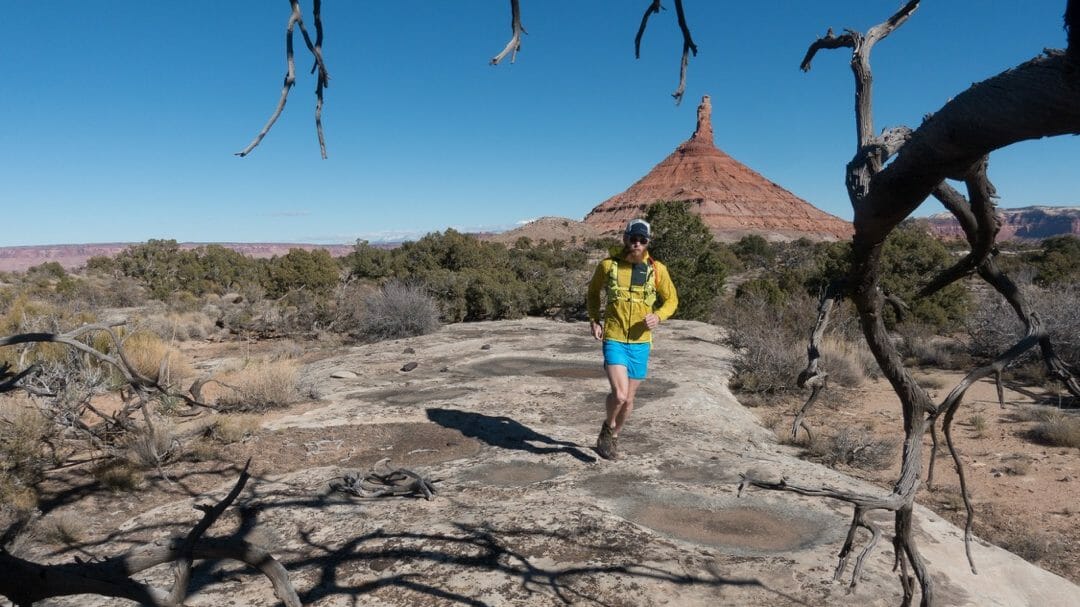 Want to learn how to conduct your own blood lactate test and analyze the results—without having to go to a lab? Read on for keys to getting the best sample.

Do not test blood that looks thin and watery.

Your blood sample should form a viscous droplet standing up on the skin. If the sample is thin and watery looking, do not waste a test strip. It is likely to be contaminated with sweat, or the athlete is overly hydrated.

Wipe away the first drop.

Squeeze out a nice 1/8-inch droplet and wipe it away with a paper towel. I do not use alcohol for this because I have gotten too many error codes when using alcohol. Perhaps it is my impatience, but the alcohol takes too long to fully evaporate.

Squeeze out another 1/8-inch drop and test this one by CAREFULLY approaching the droplet with the test strip (now installed in the meter) perpendicular to the skin. If you touch the skin with the test strip on a Plus, discard that strip and start over. You WILL get an error code. When the strip touches the top of the droplet, the blood will wick up the strip and the meter will beep. This is what you want. If you go any deeper, you run the risk of touching the skin and blowing the reading.

the thin and watery thing cost me many strips … and makes selftesting at higher intensities difficult because of sweat. I don’t test above 2 mmol anymore. Too uncertain and I see the main value for LT1 anyway.

I got the Lactate Pro 2

Yeah that link was really helpful, thanks. Have yet to do it cycling though. Rocker plate + stabbing = fun

but you can stop for your measurements, La levels do not change so quickly. I have a Wahoo desk. Have all my equipment ready. I stop pedalling for the “procedure”. I have the same device, gives you the results fast and requires less blood than other devices. However, this comes with the disadvantage that sweat or other contamination is more impactful.

First test was a mixed bag! Think I got some useful data.

Took the test in the afternooon.

This is where is broke down. ERG mode stopped and I didn’t spot it, so was free riding at around 180w for the next 5 mins.

I re-started the test to try and complete the 150w interval.

Ran out of fingers and equipment.

So it seems like my 145w is a safe bet for Z2. Perhaps LT1 is higher but I don’t have the data to support that. Will try again in a few days and see what happens.

Tips welcome! I’m sure there is a lot I got wrong

this is typical for a contaminated strip, measurement is to high.

5 min steps are a little short

Very interested to hear about your process/results. I’ve considered getting one for the same purpose (ie LT1, not LT2), but it’s hard to justify the expense for me, and I’d need to be confident of getting consistent results from the testing for it to be worth it.

I’d also be interested to see how this correlates with the HRV method using ALPHA 1: See the discussion in this thread regarding the HRV logger app

What’s the conclusion when decoupling is negative? [image]

I am seeing a lot of variability in the alpha 1 metric, so even if I ride 60 minutes at the same power (and very stable cadence/HR), I get quite a wide range of the alpha 1 metric. The results are variable enough with a constant load that a step test would have to have 30+ minute steps, and likely 60 minute to be confident in the numbers.

I get quite a wide range of the alpha 1 metric.

I have the opposite experience, RPE and Dfa1=0.75 match very well. And it’s about mid point between Coggan and Friel top of Z2. If you want to find LT1, I suggest you forget watts and focus on RPE and HR. Cheers.

Here’s a short aerobic ramp workout I did today just to check on things. I use the Lactate Plus meter and calibrated it with both hi and low solution a few days ago.

I plotted power, dfa-a1, and blood lactate and there’s a pretty good trend. I should have collected vo2/vco2 data with my metabolic cart, but I was feeling lazy today. 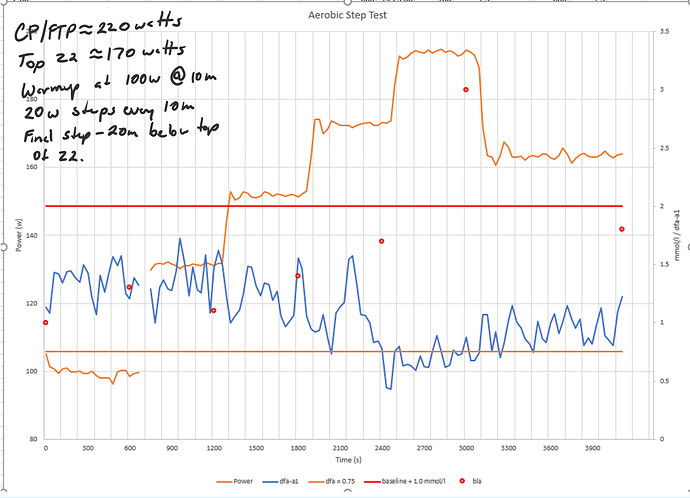 In my experience, the Polar H10 has been the best HRM for collecting RR intervals. I use the typical best practices for the straps and can get good data reliably. I now wear two and collect RR intervals on two different watches.

If the Polar H10 is so good why are you wearing two?

Well, I like redundancy. And no device is perfect. But, the H10 has been validated several times and even Polar’s white paper compares RR intervals to many other HRMs.

I use two power meters on my bike (three if you count the Stages that doesn’t have a battery in it), two Stryds, two HRMs, etc, etc. I like to know when things work well and when they don’t work so well, so I collect a lot of data.

I don’t really see this trend, do I miss something? You say top z2 ~170W (you use baseline + 0.3mmol for LT1?). The step at 170W is completely off from 0.75. And the final step is probably affected from the previous step which appears quite intense at 3mmol. It has been reported that dfa takes quite a while to recover from more intense efforts. I must admit if I just saw the dfa curve I’d have a hard time telling LT1. I would probably say it’s the 3mmol step.

The purpose of the ramp was to go a bit above LT1 and then down under LT1 to see if dfa-a1 recovered to over 0.75, which it did, and blood lactate dropped below 2 mmol/l. For me, I know by feel and gas exchange that LT1 is around 170-175 watts. The 190 watt step shows that dfa-a1 drops below the 0.75 threshold (I was noticing my breathing slightly more, but the effort was not intense at all) and dfa-a1 would continue to drop further if I went to 210 watts.

So I’ve gone down the rabbit hole with HRV. You can see my data here: 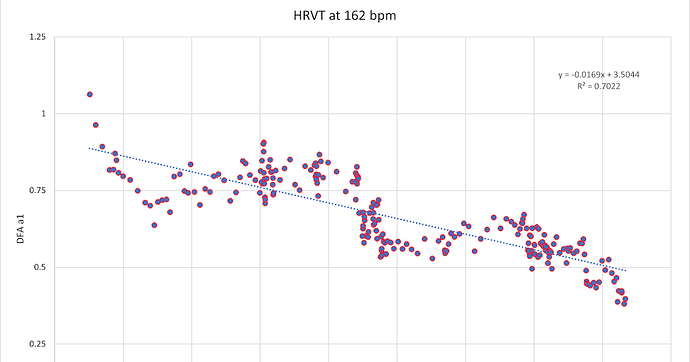 Case studies (check back for updates)

RPE is very high at the numbers suggested in the analysis. So will be interesting to see what the blood lactate says. Maybe it will be the same

I think people tend to point to a single point for LT1, when it should be seen as a range. Both numbers are “correct” per se, but LT1 is probably better described as the range from the first inflection (or + 0.3) up to +1 mmol. The old Norwegian HR zone Zone 2, should be roughly in this range of -La.

So if I go out and ride “Below LT1”, I’m going to try and stay completely below it. As observed by Seiler, if you look at a TID distribution chart that lists the distrobution in the 5 zones instead of 3, you’ll see that the vast majority of their endurance work is in Z1 of a 5 zone model, with a little bit of Z2 (By HR, not power).

These are still somewhat generalized and just my understanding of the various methodologies. Finding LT2 is very difficult, but using the Dmax of a lactate curves first and last point seems a good place to start, and should probably be verified by a 30 minute steady state test.

I live in Europe too. Where did you see that offer? Did you buy it?

I’m thinking about going down the lactate meter road myself. I understand the literature and most of the accepted step methodologies I guess my question is one of training application.

So let’s say I nail down my LT1 and use that as a Z2 top end target. Start riding there for a few hours. Riding riding riding…boom HR decouples. My assumption that HR decoupling is actually an exceeding of the LT1 mmol lactate concentration, since HR is probably increasing in order to process excess lactate in the system? IOW, would HR decoupling be a sign to back off back into an LT1 HR regardless of power out?

Trying to nail down the specifics for application.

Hr can decouple for various reasons, so don’t let that be your only giude. You should buy the lactate meter if you are interested in either staying under, or riding specifically at it as a target. There are many different ways that are close, but don’t always paint the whole picture.

anyone know the underlying technology here?