I’m trying to dial my fit in and I know we have a lot of experienced fitters here.

I race mainly criterium or rolling road courses, long climbs are not on the menu.

I cant seem to get a happy position on the bike, I think my problem is setback - because when I feel I am in a position to generate power I am not able to ride with my hands off the hoods, I feel like I am falling forward, however with the saddle setback further I don’t feel powerful and the resulting reduction in saddle height/reach makes my hip close up too much to ride comfortably/powerfully on the drops or in the aero-hoods position.

I’ve not measured this to be exact but my leg to body ratio is in favour of the legs (saddle is usually set high, near min insertion, while reach feels quite long with over 100mm stems on 56cm frames, 5’10" height).

Any ideas on where to start?

Really hard to provide much feedback without some pictures. If you could post some pictures with your saddle in both positions, it would help. Take them from the side and with the camera at the same height as your hips, if possible. Video is even better.

however with the saddle setback further….and the resulting reduction in saddle height/reach

You may want to look into shorter cranks to help offset this. Again, pictures of you on the bike will help in this regard.

Lots of factors interact with each other here - without seeing you on a bike it is difficult to know what factors are really causing the issues.
While saddle heigh is generally a function of leg length, and increasing saddle height will effectively increase the relative leg ‘reach’, in most cases saddle set-back will be a function of femur length. The longer your femurs, the further the saddle needs to be set back to be in the same relative position as someone with shorter femurs.
This thought then interacts with crank length (which will impact the extremes of foot position relative to the saddle). Again, and this is a generalisation, people with shorter femurs generally feel more comfortable with shorter cranks. Shorter cranks mean that the extremes of the pedal stroke, especially at the top, are smaller, allowing for a more open hip angle.
Also, the front end position will completely affect the hip angle and weight distribution, which can mean that you have to adjust the saddle height and position.
Basically, it’s complicated without seeing how you look on the bike (and know how different tweaks make you feel and impact on all the different areas)

I went through something similar when I built up an Emonda 56 from an Addict RC 54. I thought I had everything nailed as I was fit on the Addict by an amazing fitting pro. I just measured and moved the group, bar and saddle over to the new frame. What I messed up was the drop as I measured from the floor up to the bars and not taking the difference of top of saddle to top of bars. The result was bars about 1cm too low. No matter what I did I felt like I was falling forward and I was to some degree unless I increased setback to a ludicrous amount. Once drop was corrected my fit was back to the correct equilibrium with setback and saddle height.

I will get some footage/stills. Comments below

I should clarify, when I move the saddle back to change setback over the bike, I move it down to keep the saddle height/distance/reach to pedals the same, same when it comes forward the height is increased.

You may want to look into shorter cranks to help offset this. Again, pictures of you on the bike will help in this regard.

I already run 165mm cranks (from the std. 172.5) and this has improved the hip angle, I was diagnosed with a hip impingement/cam which caused one knee to track badly/kick out at the top of the stroke, this has helped with this.

While saddle heigh is generally a function of leg length, and increasing saddle height will effectively increase the relative leg ‘reach’, in most cases saddle set-back will be a function of femur length. The longer your femurs, the further the saddle needs to be set back to be in the same relative position as someone with shorter femurs.

I am confused as how I would determine my proportions and even if I had measurements, how this would help determine bike fit. The bike fit groupthink/internet consensus is setback should be as such that you should be able to ‘play piano’ on the bar tops, or ride no handed with arms behind the back/to the sides without falling forward (at a decent tempo pace) but I cant get to that position comfortably as I feel too far behind the BB which is I suspect due to my shorter torso, and therefore weight distribution?

Also, the front end position will completely affect the hip angle and weight distribution, which can mean that you have to adjust the saddle height and position.

As above, I was under the impression saddle setback/height was the main determinant of weight distribution, if the hands-off behind back test is to be believed?

Food for thought and thanks for your replies.

I can only add my 2 cents, and that is that I’ve never had the “ride without hands” thing work for me. Just too much muscle mass on upper body…

So I wouldn’t personally use that as something that makes you change your fit.

I have done my bike fit at one of Swedens best fitters, that does many of our national professionals, and I do put quite some weight on the bars.

It’s not an issue for me, but it does force me to engage my core, and took me a few weeks to get used to it.

Personally though, the whole falling forward feeling is for me due to seat angle, just a few degrees difference makes a huge difference for me in that regard.

Like someone else posted, try to raise the front end instead

That will put more weight on your saddle!

Personally (and other’s advice may differ) I would initially ignore the front end when doing a bike fitting. I would generally start with getting the pedalling position dialled in most of the way (so in the right ballpark), then move to looking at reach and drop, then tweak the back and front to get things tightly dialled.

For a solid neutral position, I would generally look to get the front of the rider’s knee above the pedal spindle (when the crank is horizontal). Bit old fashioned, but effective for determining a ‘base’ position. This, combine with getting the saddle height in a comfortable and efficient pedaling position, effectively determines the setback.
I would then look at the front end reach and drop, with the primary concern being looking for a position that is comfortable and that the can realistically hold (so flexibility, core strength and other factors come into play there) that allows for efficient pedalling. This has to take into account the riders specific riding goals - if aero is a driving factor then I would look at what could be done to effectively lower the shoulder position (could be more drop or more reach), accepting that this might sacrifice a little on the comfortable efficient pedaling position side of things. Often a rider will have a position that they want to get to, but that they need to move to incrementally.

If you lower the front end you are effectively tilting the weight forward, in most cases putting more weight on the hands. Pros make up for this by doing large amounts of core stability work (and vast amounts of hours in the saddle) which means that they carry this weight distribution differently (holding their bodies ‘up’ puts more weight through their saddle, even if the front end is very low). Most non-pros will simply never be able to achieve the same results there, so need to accept that they will have to carry more of the weight through their hands with an aggressive position, or go less aggressive.
A lot of that comes down to the riders aims and the degree to which they are prepared to either work hard to achieve a more aggressive position or accept a degree of discomfort.
Personally (again, my that’s worth emphasising) I wouldn’t put too much stock in non-riding position factors being a determinant of your actual riding position. Being able to ride no handed at a good pace is obviously pretty cool, but many good riders can’t do that even though they have positions that work amazingly well for them. You’re not going to spend much time riding no handed, so you’re better concentrating on getting your position to work for you without putting such limiting preconceptions/restrictions on yourself. Basically, being able to ride with your hands behind your back may be a sign of good weight distribution, but the weight distribution that is best for you as an individual will not be the same as it will for another rider - it is personal.

Have you tried having a bike fit without your bike (so, on a rig)? If you’re struggling to feel ‘right’ on the bike, it may just be that the specific fit of the bit you have is not quite ideal for you (or, more likely, for where you are physically right now).

TBF I only suggest (or clarify) raising the front end after the setback and saddle height are ballpark close and level-ish saddle.

The pics below are the old position, will update when I have time to record again… 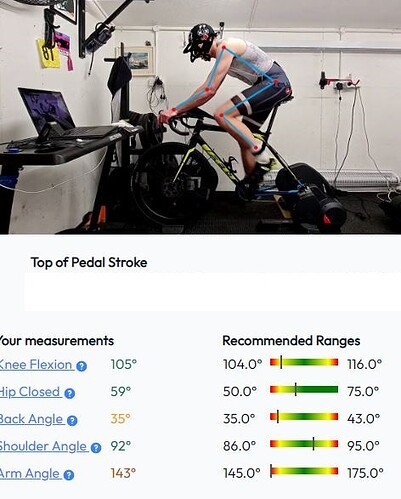 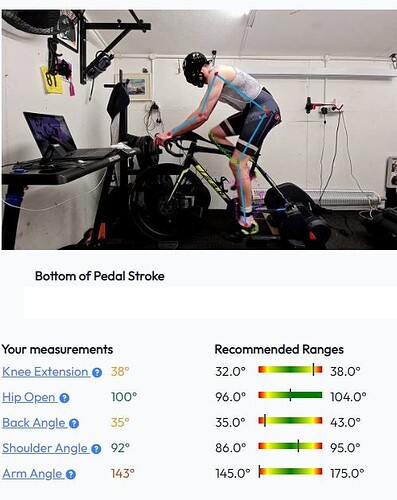 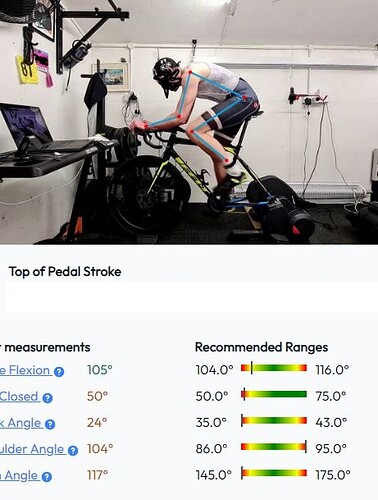 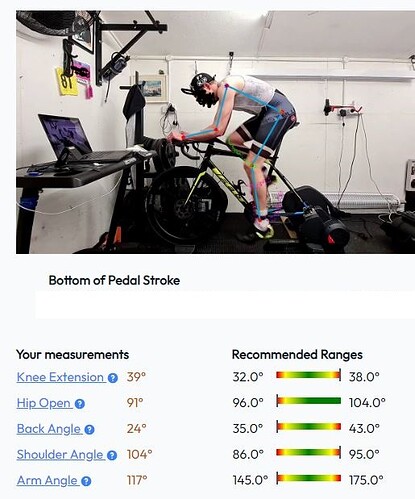 What I’ve changed (not pictured above)

Feels really good, a lot more sustainable in the aero hoods position - thanks for the input everyone, I’ll try and get some photos of the new position.

I can now get the forearms parallel comfortably, and it’s closed the gap between head and bars a little, also a better hip angle from the saddle height.

Ran out of time to record new position, but will do in the next few days.

@wattage_narco what software have you used for that?

You record a video and upload it, then it does some AI ‘stuff’ and generates a fit report. There’s a few threads on here about it. I’m not sure well it copes with more ‘extreme’ positions like aero hoods or TT bike but it’s good too see hip angle etc.

I have just moved the bike off the trainer to upgrade the groupset so it will be a while before I get a vid of the new position!

Thanks for this. Does it make recommendations about setback, out of interest?

Here’s an example of the recommendations: 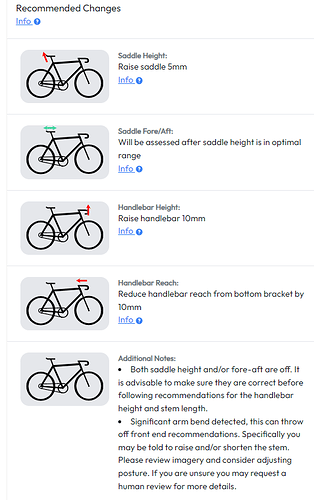 That’s really helpful. I may give it a go. Thanks.

New position is on the left, old on the right for side by side. The software says same hip angle at top of stroke even with the higher saddle, may need to bring it forward.

Its closed up the head-to-bar gap, and feels more sustainable. I am going to try a 110mm stem and raise the saddle more, as well as bringing the saddle forwards to try and open the hip angle further. 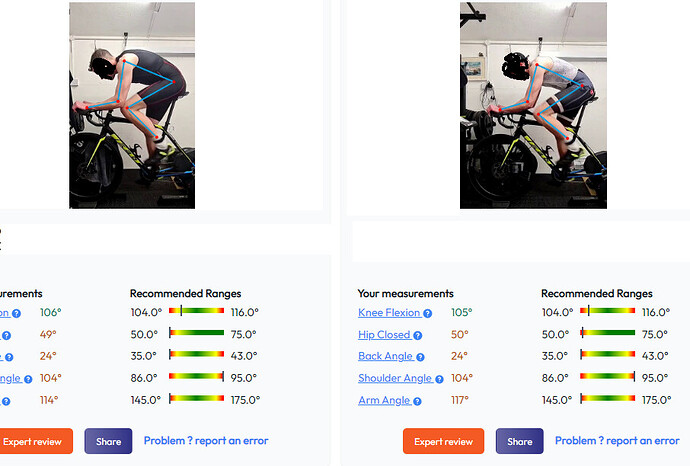