Big ring vs. small ring on the trainer.

The effect is the same here, but instead of gravity vs. aerodynamic drag causing the difference in loading, its the inertia of the flywheel.

I think you are missing several factors, as Erg mode has a control loop that applies braking force if power exceeds target.

That braking force gets transmitted to crank thru gears, and counteracting the braking force requires less torque when in small chaining at same cadence.

Torque is proportional to force on pedals, so less torque requires less change in force applied to pedals.

So at the same rpm, and same power output, the small chainring requires less pedal force to adjust to changes in force that Kickr is constantly applying thru cassette.

Without running some numbers on the impact of flywheel, we don’t know how much flywheel speed impacts the Erg control algorithm with different gearing.

thanks dave, I think you answered my question up there, actually I have more facility in out-power in climbs than in the flat

I understand that watts are watts, but for me it was a psychology thing in my mind, Actually, for what you wrote, I probably have better muscle groups to climb.

Yes - this is true. The trainer also adds resistance, in addition to the flywheel inertia.

And with the right control algorithm, the trainer could indeed emulate aerodynamic drag.

For less experience riders, they typically can put out more power going uphill, as the relatively slower rotation of the chain ring at the ~noon point in the cycle gives them more time to activate and deploy the glute muscles to get power out in in the earlier part of the pedal power stroke.

Big ring vs. small ring on the trainer.

Exactly this! Great post. When I first started training the big ring high cadence stuff was way more taxing on me than lower cadence small ring stuff (plus I like to ride the hills). Back then my 8 or 20 min tests were done on big ring and probably gave me a moderate or lower number than I could actually sustain pushing up a grade.

Now many years into training I’m more developed all around so there isn’t a huge difference between the two. Plus this year I’m using Assioma pedals so I’m not relying on KICKR power any more. I feel the pedals report power more accurately with no concerns of the KICKR over reporting.

Thx. I welcome others views on this also, as a way to validate (or not, as the case may be) this logic.

Makes logical sense to me, but I haven’t seen anything on the interwebs to confirm this.

@DaveWh if this were true, then you would expect to see smaller power variations in big ring vs small ring. But it is just the opposite in my testing.

The narrative here is that the primary consideration is flywheel speed and inertia, as if the Kickr didn’t have Erg mode control algorithm applying resistance.

The reality is that Kickr is behaving like a black box. If you didn’t know it had a flywheel, and I showed you smooth power in small chainring then according to your outdoor analogy that would mean small chainring on trainer is just like riding on flats in big chainring. (p.s. I have plenty of ride data that shows at same cadence there are similar power fluctuations on climbs at 5% grade as on flat rides at 18-22mph)

I’m pretty sure there are higher variations in angular velocity of the chain ring riding uphill vs flats. This is just an outcome of the physics of riding at slow speed uphill vs high speed on the flats.

But this by itself doesn’t mean there are higher power fluctuations, as power = torque * rotational speed, and the other variable in the mix here is torque, which varies a lot more over the pedal stroke than angular velocity does. And it’s the multiple of the two that counts.

By the way, I’m referring to variation within the 360 degrees on a single pedal stroke here - not variation between different pedal strokes - which is a different topic.

I’m not sure where you ride on the flats, but around here there is usually some wind. And I do a lot of solo training rides, not protected inside a paceline/echelon. When smoothly spinning at 80rpm on a nice 5% grade there isn’t a lot of change in torque, just like on the flats in a tailwind. When the pitch is changing, it is a lot like riding into a crosswind, and changes in torque are required to maintain cadence.

This is getting a little off the topic of my long post above - which was an attempt to explain why riding uphill/low inertia feels different than riding on the flats/high inertia.

I agree with your point about how torque and power applied varies under different riding conditions.

So, for dumb trainers, there is really only “one setting” compared to the options present with smart trainers in ERG mode. The inertia you get is effectively set by the weight and sized of the flywheel or roller drums. Generally speaking, rollers have much lower inertia when compared to even the most basic trainer.

So what you are saying is on a dumb trainer/rollers…where the drum size is constant…big ring or small ring does not matter. 350w is 350w no matter how you get there in that context?

This is getting a little off the topic of my long post above - which was an attempt to explain why riding uphill/low inertia feels different than riding on the flats/high inertia.

The point of your long post was to provide a narrative for why the Kickr behaves in certain ways in little vs big chainring. However when I apply that reasoning, it tells me I should see smoother power on the trainer while in big chainring because of the flywheel inertia. But I’m seeing the opposite.

So, for dumb trainers, there is really only “one setting” compared to the options present with smart trainers in ERG mode. The inertia you get is effectively set by the weight and sized of the flywheel or roller drums. Generally speaking, rollers have much lower inertia when compared to even the most basic trainer.

So what you are saying is on a dumb trainer/rollers…where the drum size is constant…big ring or small ring does not matter. 350w is 350w no matter how you get there in that context?

Assuming a constant cadence of 90 rpm, a dumb trainer/rollers will only have one “speed” that will achieve that 350w. You will need whatever is the appropriate gear selection on the bike to spin the device that fast, to get that power.

This is different from a smart trainer that can achieve the same power at a wider range of gearing selection on the bike.

Does that make sense?

However when I apply that reasoning, it tells me I should see smoother power on the trainer while in big chainring because of the flywheel inertia. But I’m seeing the opposite.

I wasn’t trying to explain why the trainer has a smoother power profile in small vs big ring. In my mind that’s a separate issue.

Then why confuse the issue by bringing the trainer into your post?

I routinely ride 40-60 minutes into at 10-20mph headwind, using big chainring. It is great training for long climbs even though those are often 34 chainring and 32 cassette (or one/two steps above it on 11-32 cassette). The big difference? On climbs the sweat rolls down my face, into my glasses, and onto my bike. That doesn’t happen riding into a head wind. Not joking, I’m being completely serious.

thanks for the discussion Dave, it gave me some ideas for additional testing as time permits. Interesting topic, and so far the answers to my questions appear quite elusive. I’ll not bother posting again until doing some more homework over the next month or two. Have a great Thanksgiving!

Pretty interesting stuff that makes sense to me.
Does it apply to the Tacx Neo? I have seen this mentioned multiple times, but I don’t experience this on my Neo.
Has anyone using the Tacx Neo attempted to use other power meters to see if the power reported by the Neo is accurate?
Thanks in advance

The Tacx Neo doesn’t have a flywheel, but the Neo attempts to mimic road riding, so I’d expect the issue to be similar on the Neo i.e. slow speed riding in the small ring will feel different than high speed riding in the big ring (which just to be clear, doesn’t necessarily mean you’ll find big ring easier than small, as it likely depends on the rider). But I don’t know for sure as I’ve never ridden a Neo.

Was thinking of using Stages app to do a high-speed data capture of torque and force, but looked at app tonight and that feature is gone (but referenced in May 2018 release notes?!).

I was going to do exactly the same thing the other night only to find it was gone. Bummer

Its hiding, just press and hold your finger on the empty space at bottom right, to the right of “Firmware” and under “Tools” in this screenshot: 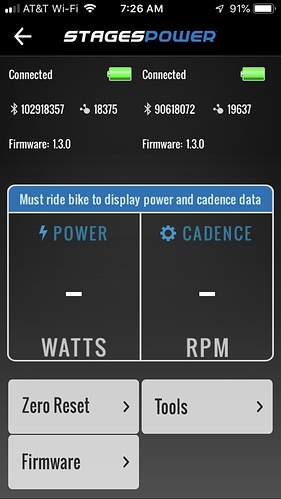 then you can email a CSV file to yourself that looks something like this: