Any reason not to just use the topstone as your only bike? I imagine it’s pretty light and works well on the road.

The lynskey certainly looks fancier though.

The Lynskey should have a little better tire clearance (people seem to comfortably use 700x50), I love the idea it’s handmade in the US, and from everything I’ve read titanium should outlast me

With the COVID craziness, I might not lose my shirt selling the bikes I have now and moving to the Lynskey. Is this crazy? Is there any reason to think that bike would hold me back for the fast group rides?

Independently of whether you should go to N = 1, one thing to consider is time: I ordered a bike in January, and I am getting it in mid-March the earliest. My LBS negotiated with the manufacturer and got me a ready-to-paint frame, for otherwise I would have had to wait even longer. I originally wanted to update my crank, but I would have had to wait until June. I think a lot of parts are on backorder. You better have enough time.

As far as the idea goes, I like the idea of having one great bike rather than two good bikes. If utmost speed isn’t your primary concern, then your idea is great. Even when speed is important, I think you’ll be plenty fast with the right tires.

Thanks for the input!!! I’ve been emailing Lynskey with some questions and I think I can get the frame in 6-8 weeks, which lines up with when the weather starts to get a little nicer here in Mass. I’ve been scouting around online and I think I can get all the parts I need from a few sites, and I already have a GRX crank and PM I could throw on the new bike.

I’ve regretting selling various things in the past (guitars and tools mostly) so I’m just trying to make sure I’m making a sound decision. Like you said, the idea of 1 great all around bike really appeals to me.

I have a Topstone Sora which doubles as my winter roadie. It’s great, and I’m not wanting for speed on group rides within reason, but the stack is limiting me getting anywhere near my road bike fit. Great for longer rides, but I do wonder if I’m de-training some flexibility with the more upright position. Otherwise though, I love it!

In this setup it may not be light, but she rolls well enough and with a set of gravel wheels it has most bases covered. 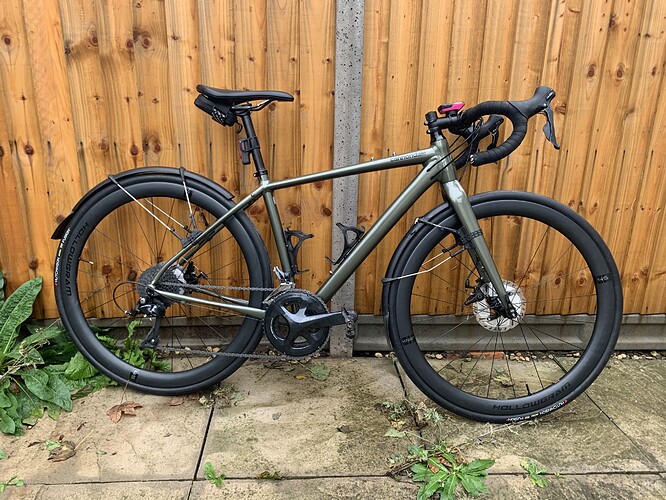 It’s going to come down to how much gravel and how much road you ride.

The biggest issue with my gravel bike on the road is the 1x gearing. If I were going to have a dual purpose bike, I’d have 2X. On the road, I don’t have enough top gear for downhills and towards the top of the cassette the jumps are quit large (11-42 cassette).

If you are really riding gravel with knobby tires then you need two sets of wheels.

I do ride my gravel bike on the road occasionally. In the fall and winter with lots of slippery leaves on the ground I ride the gravel bike. I just took the gravel bike to Georgia because I didn’t know what terrain I’d encounter. And I’m just crusing around putting in some hours maintaining fitness.

In the end though, I just couldn’t imagine giving up my road bike. My road bike is like a Ferrari on the road. The gravel bike is like an SUV. With smooth tires, it may be like a Porsche SUV but still an SUV. I just wouldn’t want to be on a fast group ride with a gravel bike.

What I’d do if I were you would be to get the Lynsky and sell the Topstone. Keep the Canyon just in case. If it all works out and you love riding the Lynsky on the road, then you could sell the Canyon at the end of the summer.

Not sure if this video is useful, but I found it interesting. It’s 2 guys on gravel bikes riding on the street. You can see how the guy in front, with 1x, is really spinning about as fast as he can going downhill. I think that if you’re going to ride on the street, you really want 2x (like AJS914 said).

Damn, I know some people love the cycling in LA but that decent looks so sketchy.

Good choice and of course it comes down to personal preference. Just FYI. I run my n=1 as 1x in my road setup with 42 - 10-42. The top speed should be roughly 1mph slower than your described 48x11 setup. I’m super happy with the gearing. Top speed is fast enough for me and it seems that I’m not super sensitive to cadence / gaps between gears and love the simplicity of 1x especially in technical terrain.

The Lynskey sounds like a great bike and was on my shortlist as well. I ended up with lighter carbon
bike with fully integrated cables instead… what’s the fun in owning a forever titanium bike - how would I spend my time if not drooling over a potential new purchase

I’ve got Tarmac SL6 rim brakes and Giant TCR Disc as my road bikes and at the same time Canyon Grail (but AL version). All bike with 38mm carbon wheels (Evanlite - local brand). Grail is not even close to my road bike in terms of performance. In the mountains the difference is huge (because of weight). But I believe there are some bike, models capable to do all the jobs. I want to build similar bike too. As a base I choose Ridley Kanza Speed (tire clearance limited to 36mm but almost road geometry and 36mm is enough for my needs). Components: ultegra groupset with 50/34 at the front and 11-34 at the back (on m Grail there is 46/30 at the front and 11-30 at the back and is not optimal to me), evanlite 38mm carbon wheels built on dt swiss 240 hubs (the weight ~1400g on tubeless option). Diverge carbon looks like vey good candidate for one to rule them all bike but on this type of bike I don’t want grx and it’s to expensive to buy the bike and rebuild it.

Just be sure you can get all of the parts on time. Not crucial when you are talking about a saddle, but if the correct BB is on back order it’ll delay your build.

I know two people who’ve gone down the n=1 titanium bike route and are happy.

One thing I’d want to ask is, how much do you ride? If you ride nearly every day, I think you need two bikes. If you ride a lot, bits on your bike will need replacing/fixing, and if you want to get out again the next morning, you won’t have time to do it. Being able to swap to another bike is great in those cases.

@splash Thanks that’s a really good point…and actually one I learned the hard way this year when I needed a derailleur hanger on my Canyon and had to wait 3 weeks for the part. I’ve gotten pretty handy with bike maintenance but there’s never enough time in the day!

@OreoCookie Excellent point. I’ve scouted out the parts and I think I can get them in time but will have to careful with this.

@bolton Your point about climbing is well taken! But I wonder if the difference is as pronounced for someone my size since climbing will always be a challenge haha

This is super personal, but just wanted to add another “1x is not optimal on the road” comment. For me, those huge jumps in gears made for a lot of deciding if I wanted to spin at 75 or 100, and on fast group pulls, sitting at 100+ rpm gets old fast. I had a 1x and sold it to go to 2x. My new bike is a Giant Revolt Advanced Pro 0 with SRAM Force eTap AXS 2x and I love it. It’s light, comfortable, and fast enough for group rides. I don’t race road and my preferred riding is gravel or mtb. I too am seriously considering selling my S-works Tarmac and going with the Revolt as my “1 road/gravel bike”. I say that because I have an aluminum trainer bike that I can use for road rides when the Revolt is in the shop. Just some additional thoughts for you to consider.

Oh, and I have never owned a titanium bike, but I lust for one!!

@Pbase Thanks for the input!! I know GRX has a wider chain line for big tires. Do you have any clearance issues with Force? Lynskey could build it up that way so I might look at pricing.

Does your Tarmac have electronic shifting? I’m guessing it would being S-Works but figured I’d ask. If I go the N=1 route I would definitely want to go with electronic, but if I hang on the the road bike I wonder if it would be tough switching between GRX Di2/105. Seems like 99% of people get hooked on electronic once they go that route.

My road bike is Ultegra Di2 and my trainer is 105. No issues at all because they shift with the same movements.

On the other hand, going from eTap to Shimano can be confusing for the first few shifts since they are done with different movements.

I edited my original post to include “eTap” for clarity.

Careful, trashing, or even questioning 1x in the wrong manner can lead to significant negative feedback around here… My opinion is that gravel or a CX bike (yes, they’re different, but they’re both still versatile) should be 2x to maintain that versatility.

My newest bike ('19 Crockett) is 1x, but mostly because so few CX bikes were available as 2x at the time (a situation that hasn’t improved). Whenever I break the right/wrong part on that bike, though, I’ll convert to 2x, though.

Especially at the aluminum price point, I’d prefer 2x; with a 36 inner ring I can race almost any lap I’ve ever been on with maybe two/three FD shifts per lap, but with a front 40tooth 1x, I lose overall range AND clean shifting for the other 200+ rides of the year.

On the other hand, going from eTap to Shimano can be confusing for the first few shifts since they are done with different movements.

Back in the day, (pre Di/Etap) I had both 105 and Rival on bikes in active rotation… the mental math never caused me any angst after I left my driveway… I’m not racing for money, so if I happened to miss a shift at some point, I never noticed, and certainly didn’t complain.