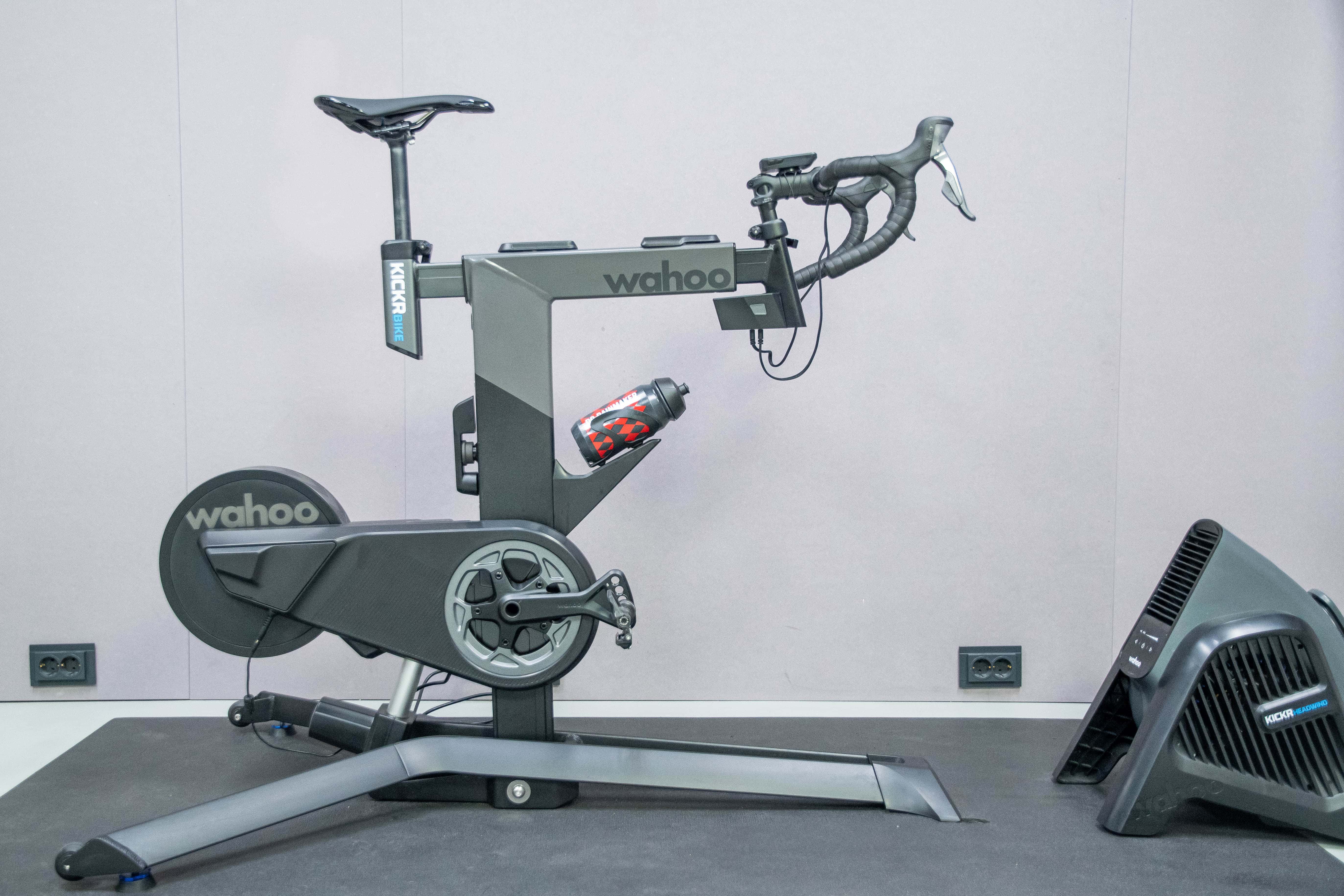 At $3,500 the Wahoo KICKR Bike is Wahoo’s most expensive product. And one of the most expensive indoor training products you can buy. It’s also the company's first go at creating not just indoor bike, but actually an entirely different

Wahoo’s KICKR Bike with Built-In CLIMB: Everything you ever wanted to know

In a move that probably shouldn’t surprise anyone– Wahoo has joined the indoor smart bike fray, with their new KICKR Bike. This unit is far more than just a KICKR and a CLIMB squished together on an L-shaped chunk of

Haven’t had time to watch the @GPLama video yet (I’m at work) but the Wahoo website is listing the KICKR Bike for £1mil. I’m assuming that’s got to be a typo!?

…before we get our panties in a twist. We’ll need to know if it’s “any good”. My discussion in my video was that we used to ride $250 dumb trainers. Smart trainers changed the game and we now spend $1000+. We need to wait and see if REAL smart bikes like this do the same. Time (and people, not media) will tell.

That sounds much more realistic. It’ll be interesting to see whether people think it is worth the premium over something like the Atom.

Looks super cool and I’m sure they will sell many. Looks to be worth every penny. For me I have a hard time justifying $3,500 for a real bike and can honestly say I will never spend that kind of money on a indoor trainer. Try explaining that type of purchase to the wife! I’d gladely go back to my Kirt Kinetic (it gets the job done) before spending $3,500 on a dedicated trainer.

This thing looks amazing. I was dead into the NEO bike, especially being a NEO user, have two and they’re superb - but Wahoo’s design is incredible.

Hyped for this, can’t wait to see a comparison between this and the Tacx’s bike!

It looks interesting but with the quality control issues Wahoo had, I definitely won’t be an early adopter at that price point.

Agreed, really struggling to see how I could justify something like this to myself, let alone the wife! My problem is that I mostly justify purchases on the same basis as the TR motto - will it make me faster?

I can justify a quality smart trainer over a dumb trainer because being able to train in erg mode and have decent power measurement significantly enhances the quality of my training for an extra few hundred. And I can justify spending a bit more money on higher build quality to get a bulletproof trainer because it will last longer, retain value better, and I’ll be able to spend more time training rather than dealing with issues through poor build quality. I can also justify having a dedicated bike on the trainer because it’s time saved taking it on and off, plus I’m more likely to use the trainer more if it’s ready to go, plus it’s an old bike that would likely only sell for a few hundred.

Can’t see what training (=speed) advantage this could possibly give me over a quality ~$1000 trainer that would justify an extra $2500. More realistic road feel, shifting, etc, doesn’t make me faster. Uphill simulation might be an incremental gain, IF I was doing a race with a lot of climbing AND doing all my training indoors or on the flat. That’s digging pretty deep though!

I guess I’m just not the target market for this. Does look like a very well thought out piece of kit and if money was no object I’d love to have one.

Also worried about Wahoo’s ability to knock this out without problems, that said -

What an indoor bike. This thing looks absolutely amazing. I was sold on a Neo Bike and now I’m in a loop.

For $3500, I could get an excellent road bike, a Kickr or Kickr Core, and still have plenty of cash to spend on kit.

To me, smart bikes never sound like they are worth it from the consumer perspective. For businesses, hotels, and other commercial locations, they sound fantastic though. It would be awesome to see bikes like these in every major hotel chain so we could get the quality training we’re looking for while traveling.

I think some of these companies could do with hiring Jony Ive’s new consulting company. I understand that form is supposed to follow function, but all these ‘bikes’ look like the land striders from the new Dark Crystal series.

Of the bikes I have seen, I actually might try to talk my boss into getting one of these at our shop. I see this being a great option for fitting purposes. The interchange options of components is way better than others I have seen.

There is the Retul Muve SL bike, but it is more expensive ($5k?) and has no power control natively. The Muve does feature a better adjustment design with live and minor controls. But the quick release option within the Kickr Bike is nearly as good and you gain the other benefits.

I was thinking about how great the Wahoo or Tacx would be to play around with position, dial in different bike geometries, try new aero positions incrementally, etc, all on the consumer end at home.

Yup, another option that can help justify this over a bike/trainer setup.

It would be interesting if you could put a mountain bike handlebar on it. Looking at DCRainmaker video, it would seem the limitation with a flat top bar would be shifter/brake compatibility. Probably not a big deal if riding in ERG mode, but if using a mode where you wanted to shift and/or brake it would be a problem.

I like the fact that my trainer setup is a bit if everything I have it gives me an industrial feel and I don’t nice sweating all over the place. This would have me worried that I would wreck it just by using it

I’m mostly concerned about reliability on the Wahoo, especially with the Climb integration and the stress on the actuator.

Otherwise, besides it being absolute the most hideous thing I’ve ever seen, it seems pretty cool.

I actually have more faith in this Climb integration, since they used what appears to be a “standard” linear actuator. They are likely a better option than the belt drive they chose for the first Climb.

There are a host of frayed and snapped belts on those that are making me nervous about mine. I need to pop mine open (out of warranty now) and check the condition. I also plan to pre-order a replacement belt to use if/when I see excessive wear. I am disappointed that they seem to have missed the mark in any testing and lifespan they had for the original Climb.

That and the other Kickr18/Core issues lead me watching the first few months of the bike release closely. I don’t think I even want the bike, but I might see a place for it depending on the changes I have been considering for my pain cave (more users coming to my place for training).

On looks, they missed for sure on styling when compared to the Neo Bike. The exposed wires on the Kickr Bike are poor and I can already see ways to internally route them cleaner. Couple that with the poor choice of location and design of their “display” and I see some notable misses on the Wahoo version.

On looks, they missed for sure on styling when compared to the Neo Bike. The exposed wires on the Kickr Bike are poor and I can already see ways to internally route them cleaner. Couple that with the poor choice of location and design of their “display” and I see some notable misses on the Wahoo version.

I thought they did that so that you can replace the handlebars with something of your liking. As far as I understand, Wahoo is working on TT and MTB shifters. Although I agree, it is a bit ugly.

That is true, and a good consideration. But I still think there are other ways to clean up the routing without having them hang loose. Some parallel tubes or other routing could improve the looks and minimize the chance of snagging a wire and ripping it out of one end or the other.