Wasn’t sure if this belonged in Training or Racing so apologies if it has to be moved.

Pretty simple question. Where do you sit when it comes to KOMs/QOMs? Are they important to you and do you actively seek and challenge for the segment?

I ask because it would seem that completely by accident, I took a KOM on a group ride with my teammates during our Saturday drop ride. Today I received a message from a person who I’m guessing was the previous holder of the KOM. His message was quite, lets say, passionate. To the point that he called me a ‘cheat’ and that he knew I was on a group ride. He also said that he’s ‘flagging’ the ride. Not even sure what that means…

Initially I thought this was hysterical but the more I thought about it, I thought wow, this person has got to the point where he’s felt the need to message me about a KOM. What is this coming to?

For context, this wasn’t an impressive alpine climb or a local TT course, it’s a stretch of road which whilst lovely, has no other spectacular features.

If it wasn’t a climb, nobody cares, and neither should he. If it was a climb, you don’t get much help from a group anyway.

No. This is why I enjoy actual racing. Nothing against strava but, the segment obsession has made some who ride in group rides ride like total ******* .

I think they are OK as a fun challenge, but people take them WAY to seriously. The only ones I really target are whilst on my annual holiday, and then its fun to watch the locals take them back over the following months.

Personally, I think that the short strava segments are completely pointless. they need to be a few KM at least to be worthwhile.

My local TTT team has half of the KOMs and the other half is a guy in a aeropod bike. I have a few KOMs on local sprints from leadouts so it really does not matter at all. It’s fair game, your own power your KOM.

Strava KOM’s are fun! There are times when I’ll go out to try and bag a few KOM’s, but it’s getting to the point with many of the segments now that the KOM is only challengable if it’s heavliy wind assisted or part of a group ride.

This is our Thursday chaingang route. It’s been ridden so often in chaingang that there’s absolutely no hope of getting any of the KOM’s unless one of the pro-teams decides to ride it! Some of the segments are taken by us training for Team Time Trial on our TT bikes!! The point? I’d like to be a fly on the wall of the Strava support office when your KOM gets flagged for being part opf a group ride!! Well done on the KOM!!

Today I received a message from a person who I’m guessing was the previous holder of the KOM. His message was quite, lets say, passionate. To the point that he called me a ‘cheat’ and that he knew I was on a group ride. He also said that he’s ‘flagging’ the ride. Not even sure what that means…

Ignoring the rest of the debate for a second, You now need to go find all his other KOMs and steal them.

he has broken rule #1 and must learn of his error

Either just ignore him, or reply and tell him that you weren’t even going after the KOM but on the next ride you will actually put in an effort.
Just stick with your first reaction, laugh and shake your head at it - people take it very very seriously so often. I ride for me, and no one else. I won’t say I ignore Strava segments, because I don’t… I like to see where I place well on segments, and every now and then I’ll go after something but it doesn’t make or break me or my ride.

I only “care” about where I stand compared to my friends as it just for fun and banter.

On big events it’s fun to watch the list for that day especially if there isn’t a time measurement in place from the organisation.

I’ve gotten significantly less engaged with Strava over the past 2-3 seasons and no longer can be bothered. I still pick up the occasional KoM and have a few that are local hills where I know my times very well but that is mostly because I ride them a ton and is much less about the KoM than about comparing to my prior efforts.

That said - if someone did what you describe I’d probably spend an afternoon taking all of their KoMs the next time I had a free day.

The other thing that amuses me is getting the ‘so and so took your KoM’; email and then seeing that they’ve been going after it for weeks or months and needed the perfect weather or whatever to hit it - people get VERY invested in KoMs

I am, admittedly, an opinionated dick about this subject.

I like Strava segments but you really can’t take them too seriously.

I’ve got a handful of KoMs on my daily commute but my times have far more to do with the wind direction that day than my fitness.

That said when I get the “x has taken your KoM” I’ll alway check that it wasn’t a car and flag it when it is!!!

I’ve not gotten into any KoM battles that I’m aware off.

Hills are the only ones other people are even vaguely interested in though. I’m not a climber though so no proper KoMs for me.

As this forum seems to have a friendly, helpful vibe, I won’t post a link to the KOM as it could have ramifications. I don’t know any of you (beyond our interactions here) or who you may or may not know away from the forum. Basically I want to ensure that I remove ANY possibility of this escalating.

I do however appreciate all of the feedback. I did consider taking the team back out there this weekend and really going through. Then I’m just being a tool and involving others in my ‘toolness’.

I was out in corfu recently with the missus and decided to take my PM pedals and some cycling kit with me on the off chance a local bike shop might be close by so I could get some miles in whilst she lounged by the pool.

the roads in corfu are like the cobbles of flanders but I got bored and hired a bike. one ride I did I was pushing a little bit not massively and then found out that I had achieved a top 10 time on a segment. sweet I thought, I looked into it more and I was only 6 seconds off the KOM… I found the chap who had the KOM and he achieved it during a race which took place 3 years earlier. it looked a great race tbh but hadn’t been held since, infact I saw one other serious rider over the 5 days I was riding, so cycling in corfu isn’t that big a deal.

I went out two days later and smashed the KOM taking over 9 seconds off it as I purposely worked out where it started and ended and just did enough. it wasn’t even a massive effort. the segment isn’t much over 1:15 seconds. Infact here it is Waterpark | Strava Ride Segment in Greece I believe it will stand for a while as no one rides out there. Its my only KOM and whilst I have it I am proud of if but I know the minute I lose it I wont care in the slightest lol.

my point is, the original KOM was achieved in a race and then I took it purposely riding out to it and going for it as I knew where it started and ended. who’s is the correct KOM? no ones and ultimately who cares! I could have done the ride on a normal day with a 40mph howling tail wind, was my KOM correct then? ultimately it doesn’t matter and as said previously take as many KOM’s of that guys as you can as he is being a little bitch.

First, congrats on your KOM! My thoughts on your critic and on KOMs generally…

In general, I kind of wish Strava would sunset the KOM feature or limit its application to climbs and stretches of road of at least a few miles. An alternative suggestion I might make would be to move the KOM/QOM and leaderboards out of the free product and into the premium version. Or perhaps move the ability to create segments to paid users only. After years of allowing anyone to create a segment anywhere, my entire region is full of trash segments too numerous to even think about.

We need another Epic KOM debate!!! 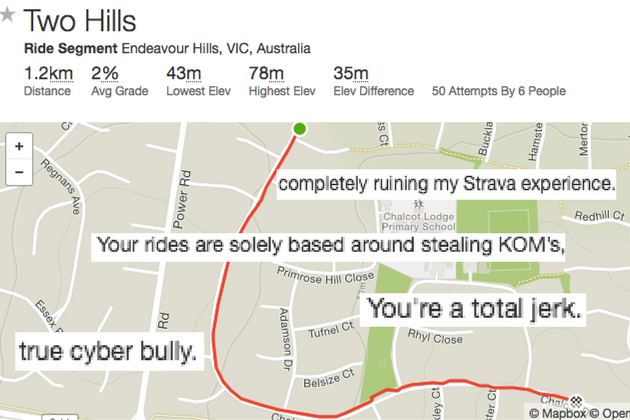 When KOM chasing gets serious

I took a downhill KOM that had stood for around 5 years, not intentionally but rather after riding up a hill I frequently ride, into a strong headwind, I thought on the way up it would be a lot more fun with the wind behind me so I turned round and rode down too, it was fun!

Welp…I guess we won’t be targeting this KOM gang!

I used to KOM the past couple of years…as an untrained commuter…with a ridiculous name.

Was fun just to see what I could at the the same time giving all the too-serious spandexers a little jab.

Three things turned me off: i) like the OP, crazy people would start freaking out if their segment got poached – esp by a dude on a single speed!; ii) Strava’s whole GPS technology is pretty weak, way too many mistakes and miscalculations, e.g. I’ve had KOMs from segments I’ve never ridden, they were just in proximity, and finally iii) Strava cheaters. wtf?? Really?!

Basically the whole thing is not worth my time any more. Maybe a big doozie of a segment (like the one Nate used to hold), but otherwise…meh.

My city gets a lot of World Tour pro riders visiting/staying for off-season or whatever…and some of them make a list of the hardest segments then go out and completely smash them. No amateur rider is ever going to come close, so again, why even try. Don’t understand that mentality – you’re already a PRO rider…do you really need to go out of your way to show up all the local recreational riders??

Bahahahaha! That someone would get all pissy over losing a KOM is absolutely nutty to me, I chase them occasionally and usually fail but it is fun to see those little pretend trophies after a ride. Pro tip…WIND DOPE the F out of them if you get a chance