The point is that it’s misleadingl to refer to ‘sit bones’ because, as Chad estimated and is obvious from the anatomy, few cyclist sit on them and the phrase already has a common usage that refers to a part of one bone, so both parts aren’t true. Using “sit” in the phrase in the cycling environment is so utterly stupid and misleading that adding the word ‘bone’ just adds insult to injury.

That makes no sense. If you crash and break your rear derailleur you can say your bike is broken because it stops fulfilling it’s function as a bike but that does not mean a rear derailleur is a bike.

You’re arguing both sides of this argument. I’m done.

You’re done because you have reread your post and realised it makes no sense. Nothing to do with me.

Unsuprising you still can’t point to anywhere you demonstrated either ‘reason’ or ‘thought’. You don’t even know what a ‘strawman argument’ is.

Hey, all!
I want to jump in to remind everyone of our Community Guidelines for use on the Forum.

Welcome to the TrainerRoad Forum!

This is a Place to Learn, Disagree and be Entertained

There are just a few rules.

I’m seeing a lot of verbiage here that is not following either of these guidelines, so I am hoping we can refocus a little and stay constructively on the topic of sitbones and saddles.
Its definitely a subject with room for interpretation and multiple perspectives, so disagreeing respectfully and presenting information, data, and input from a productive standpoint is what we’re looking for. We’re ultimately trying to help each other be better athletes, yeah? Lets do that.

Maybe, in addition to ridiculing other peoples thoughts on the subject, you could tell us what the correct approach to this problem is?

You’ve pointed out a lot of “wrongs” but don’t seem to have shared a “right”.

Simple. Don’t use a misleading phrase.

Given your extensive knowledge, I was hoping you could advise us how to sit on a saddle, which bones we should be supported by (and the names of those bones) and some things that people with ongoing discomfort might try to alleviate some of said discomfort

It depends on pelvic rotation which bone is sat on. The ‘sit bones’, aka ischial tuberosities, highly unlikely to bear weight and even Chad estimated only 5% of TR riders sit on their “sit bones”. In front of them are the ischial rami and in an even more aggressive position the lowest bony point will be somewhere on the inferior public rami; there is no consistent distance between the two sides.

The first step is to be realistic about what position your pelvis will be, including at the end of the ride, and look for the appropriate sort of saddle for the type of riding you will do. The same person may well not find the same saddle comfortable for different activities/different duration activities and it does no one any good to pretend ‘sit bones’ exist in cycling.

Thanks for your reply

Would the bones that bear weight not be dictated more by pelvic tilt than riding position? For example, someone who is highly flexible may be able to keep their pelvis more level (and therefore be closer to having their ischial tuberosities in contact with the saddle) despite being in an aggressive position?

Reason I ask is because I have ridden many bikes with varying saddles, saddle heights, bar heights, reaches etc and always experienced numbness. I’m now wondering if that’s because my pelvis is always rolled forward and therefore my soft tissue always bears more weight than is optimal.

On the subject of sit bones, given that most companies and fitters who use this wording don’t specifically say that these bones are the ischial tuberosities, does it not still have value? The pressure mapping system or those funny specialized memory foam pads in some shops simply show you where the pressure is, regardless of whether you know the scientific name of the bone carrying that pressure.

Look at the lateral hip bone picture above and imagine sitting on a bicycle seat. Can you honestly say you are on your ischial tuberosities?

You are right about pelvic rotation, but most often they vary together and even with a relatively unrotated pelvis you’d be struggling to sit as far back as the ischial tuberosities. More likely further back on the ischial rami. The problem is that during the course of the ride your pelvic rotation may change and hence the distance between the bones on either side may change.

I’d argue that a ‘straight back’ is easiest to maintain consistently and it makes diaphragmatic breathing easier anyway. It’s also potentially more aerodynamic.

Look at the lateral hip bone picture above and imagine sitting on a bicycle seat. Can you honestly say you are on your ischial tuberosities?

I’m honestly not sure. Maybe not.

However, let’s say that I’m sat on my ischial tuberosities when I’m sat upright on a chair with a perfectly vertical back (assuming this is indeed true; it is the lowest most prominent bone so that would kind of make sense). If (and this is hypothetical) I can maintain this same pelvis position but hinge forward to reach a set of handlebars out in front of me, then aren’t I still sat on my ischial tuberosities?

And, whether this is typical or not, it’s presumably optimal and something people should aim for, atleast from a comfort perspective? I know that I seem to experience increased comfort the flatter my pelvis is. And the flatter it is, the further back of the bones I feel like I get my support from.

If it were possible that would be true and the non-cycling origins of ‘sit bones’ came from somewhere, but your abdominal contents have to go somewhere and bending your lumbar spine that much would make breathing in with your diaphragm harder. I’d aim for a position that was good for breathing and good for aerodynamics that I could consistently maintain and then find a saddle/position that was comfortable for that one position.

Come on guys. Be nice to each other. I can’t believe that instead of helping people with saddle issues there is a toxic discussion about if a common used term is medically correct. Get back on topic. It doesn’t really matter what we call it. My 2 cents: What’s commonly known as a boner is not bone. Who cares…

I just purchased a new ism pn 4.0 saddle. I have dealt with numbness for far too long, so I’ve decided to try something different. Typically I have been sitting on my soft tissue, I’ve tried many saddles and nothing helped. I’ve got two rides on the noseless style ISM saddle, so I’m still dialing things in, but I did 3x20 minute efforts on Sunday with zero numbness over the course of a 2 hr ride. With that being said, I feel more pressure on my “sit bones” then I ever have, but I think it’s something that I will get used to. Here’s a good video to explain why the ism saddle works.

In addition to tilting down try tilting up. This solved my similar problem. When you tilt up, you move back where the saddle is wider which, for me with my saddle, made me sit higher with more weight on bone and less on flesh

We are talking about very minor changes. I use a digital level so I can go back if I want to.

Tilting down leads to sliding forward onto the narrow nose of the saddle.

There is probably more to gain with tilt than swapping saddles

Seriously think you are taking that word way too seriously. It almost feels like you have a bad experience with it or something. When someone says sit bones is it not the 2 bones you feel at the bottom of your butt? I only ask because that what i think they are. They are the only “bones” I feel on my butt that I sit on. I just find it hard to believe you are more correct than an entire global industry when it comes to using the term “sit bones”. Yes it is probably not the scientific Doctors term. But to someone who has no idea, I can’t wrap my head around your outrage of the term. The OP isn’t having issues because she used the term “sit bone”, and by you using the term “ischial tuberosities” doesn’t fix anything either. She isn’t going to go to her fitter and because she uses the termischial tuberosities have her issue fixed as opposed to if she said sit bones and wouldn’t get the issue solved. You’re original comments imply because the fitter says sit bone there is no way they can solve her issue. Just bizarre 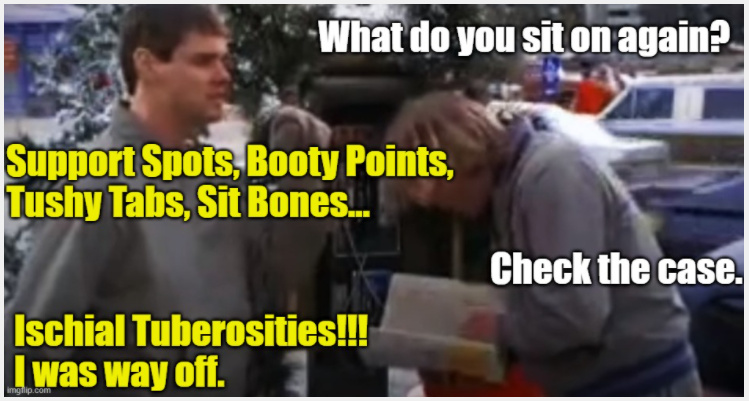 Care to quote anywhere that I said anything that might be called that?