I know that if I had space and budget for the Kickr bike I’d get that immediately.

For once I’d have a permanent dedicated indoor setup around.

Second even finding an “old” bike to put on a trainer is rather hard actually with all the constraints then you might have in terms of different riding position.

Finally even if you had an old bike my feeling is that with the kickr bike the experience might be much more immersive.

So yeah, I was very sceptical when I first saw these bikes but now I’d get them immediately I think.

I was coming from an Elite Direto with a homemade rocker plate which I had for maybe 3 years?

I got “annoyed” always having to pull my bike on and off the trainer. While it doesn’t take too long, time is tight for me in the morning so I wanted both my indoor setup and outdoor setup to be ready to go at any given time. So what I decided to do was build up a bike grabbing cheap used parts and a used frame. I used that for about a year. It worked well. The downside was I still had to lube the chain every once in a while and there was still the potential it would make a mess inside my house. And I still wondered if all the sweating would damage the bike (in case I wanted to ride it outside or sell it).

Anyway, I picked up a couple extra shifts at work and this had some extra money so I decided to just dive in. I sold the direto and the bike I had on it and the rocker plate which was able to recoup a decent amount to put towards the kickr bike. The big selling points for going to it were the ability to play with my fit, not having maintenance and cleaning issues, that my wife could potentially use it too, and the climb seemed like a fun feature.

I spend a lot of time riding indoors since I’m riding before 5am most weekdays and sometimes am alone with my kid on weekends. So I figure I might as well go ‘all in’ to make the indoor riding as enjoyable as possible.

The ability to play around with the fit is great, the climb is fun (I’ll do different inclines during TR intervals to practice different positions). It’s smooth and easy to clean and take care of. 18 months later and my wife has yet to try it…even though I put a 42” tv in front of it

I’ve been resisting buying a Kickr bike since my husband bought one a few of years ago - he’s been trying to convince me ever since, as the vast majority of my riding is indoors. I’ve set myself up as much as I can - Kickr Core, Climb, dedicated bike and rocker plate. But this price is just too good to pass up!

P.S. Husband’s Kickr bike gets used 4-6 days/week year round and he’s had zero problems after just under 3 years of use, in case that’s helpful.

Edited because we finally did the math and realized husband got his Kickr in 2019, not 2020.

Does any one know if the V2s have started shipping yet? The site initially had 9/23 listed as the expected start shipping date but I don’t see that on the page any longer.

When I see the stages bike on sale for around $2k, I can somewhat wrap my head around it and think its a reasonable workout device. At $4K, that costs more than my current trainer, elliptical and treadmill combined. Sometimes I feel like im the only person in the cycling world that doesnt use monopoly money!

I suppose it goes both ways. For someone who barely used their bike, then it makes it more appealing for both buyer and seller to know it’s very lightly used.

For someone who rode the crap out of their bike, it might make it less appealing. However, that price might be more inline with reality.

It’s really no different than buying a car, and I think quite reasonable given a stationary bike getting covered in sweat perhaps daily while rockin’ and rolling is getting wear and tear that probably should be accounted for in resale value.

Can you please let me know where you greased to keep the legs from creaking? We’ve been chasing some creaking on Mr. F’s bike for a while now but we can’t pin down where it’s coming from and where we’ve tried greasing so far hasn’t knocked it out. I’d guess it might be the same as you were experiencing. Thanks!

I removed both rear legs and greased where the legs slide onto the frame/bike.

Interesting that the bike is now shipping, but no reviews seem to have come out as yet. I know a couple of reviewers mentioned they had delays with delivery companies, which obviously impacts on review time. I thought some would have started to pop up by now.

A guy locally is selling a “lightly used” kickr bike 1 for $2300. Says it has 250 miles on it. I’m tempted, but still not convinced given I have a working neo gen 1, with and a dedicated trainer bike. But it’s tempting!

I had creaking in the seat tube of mine. I raised the seat tube as high as it would go and lubed the tracks where it slides and the holes for the pin with grease. I actually think that the cause was the creaking of the pin in the hols it was in. In any case, lubing everything stopped the creak.

Its a Monday, must have been thinking of a recent Stages SB20 sale.

No embargo. I’m honestly having difficulty finding anything interesting about it to discuss. It’s 99.9% the same as V1 far as I can tell. And that’s after unboxing and riding it for a few hours.

Direct Connect via WiFi is as good as it is on the Kickr 6. I think it’s a little quieter, I’d need to side-by-side it with V1. There’s still a resonance sound ~75rpm. The control unit where the levers plug into has had a minor modification to the underside to stop sweat ingress. There’s a little less rocking forward/back than V1, maybe the V1 I have has developed play over the years.

What remains the same: Everything else.

I have a massive list of things that I’d love to have seen updated in V2. Starting with better bars, tape, and saddle. Three things Stages nailed on the SB20.

The control unit where the levers plug into has had a minor modification to the underside to stop sweat ingress.

I got my V1 over the weekend and it has a different control unit than Mr. F’s V1 which is a few years old. He said it’s for the same reason you mentioned. Here’s a pic so you can tell whether what you have is actually new to V2 or a design change that had been made prior 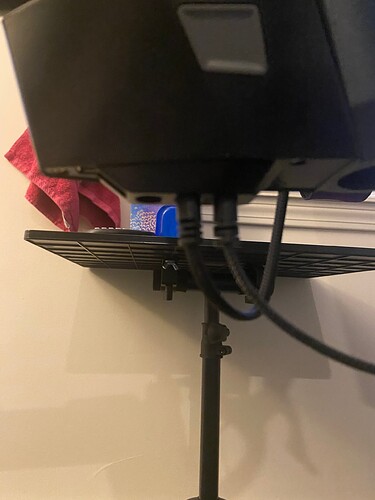 Yep, that’s what the V2 comes with. I guess it’s a running change they made to V1 too… interesting.

This must be a running change because I got a replacement V1 about a year ago after my original frame failed and it has the connection version shown in the photo which has that lump on the bottom compared to my original.

BTW- the frame failure was at the seatpost clamp. The metal cylinder with a slot in it that the clamp goes over completely broke off the frame in one piece.

Out of curiosity, is it possible to display gears as selected chainring and cassette (I.e. 50-11 like the tacx bike) instead of 2 - 1?

Giving serious thought to getting a V1 with the clearout pricing. I was looking to get something with a wired connection, but I don’t see the value at the new pricing when that’s the only real change in the V2. Slight noise reduction and increase max wattage aren’t massive deal either.

The V1 is incredibly quiet to boot. And the resonance at 73-ish RPM isn’t that bad; I can’t hear it with my earphones in anyway.

I’m in the same boat. $2300 is enough of price drop to make me go in. Only concerns are if there are any issues, will there be any replacement bikes for them to send now that inventory is so low, as that seems to be their endgame on troubleshooting.
Also, any idea if buying the V1 direct from wahoo will be better for future customer support than buying it from a retailer like REI? REI has a 90 day return policy, but does the customer support fall off from Wahoo after that time period? Or will they honor the product even if they didn’t sell it direct?
Thanks!