Anyone have more info?

Are you guessing price?

Indeed, the current SC is terrible for making anything other than minor changes. Hard to say for sure, but I like the initial looks of the base bar to pad & extension tower on the new model.

One possibility is that this might be electronic only. Imagine routing derailleur cables down and into the frame. Not sure how and where they would route to maintain smooth motion? The wireless shown and Di2 would be fine from what I can see. Mechanical might be a lot more tricky.

I would agree that it is likely only for electronic shifting. I’m just hoping that it doesn’t put it too far out of reach. I’ve owned 2 SCs and got great deals for 1st (new from going out of business shop) and 2nd used. If these don’t hit the market until 2022, and it’s over 5k (which is very likely) I will be riding the rim brake SC until 2023 at best.

Are you guessing price?

Considering price of the current rim brake and mechanical Ultegra at $4700 USD, I expect a new model to probably hit around $5200-5500 mark, with a Rival AXS version as the entry level and trainer wheels (Paradigm disc?).

Myabe they will have different cockpit for different levels…
only the Di version would have that cockpit (pro level?)
Similar to what canyon does on their bike.

They might be waiting for Shimano to unveal the new DA wireless…
If shimano does trickle down electronic shifting to 105, then they could go with 105 and training wheels on their base model for 5500 or somthing like that…
I expect to command a premium over the same level canyon bike…

Yeah, could be. The pics seem to show an integrated bar and stem, so maybe a lower spec could be a separate stem and base bar for lower cost?

Which brings up an annoyance I have with these bike. The base bar is great and fast looking with the flat bar and extensions, but rider comfort on the base is a pain. Seeing how the new hydro levers are higher from the master cylinder, I’d be inclined to fill that step up with some foam or plastic wedge, to make a slight kick back and maybe support the rider’s hands better. As is, those flat extensions lead to considerable hand force from the rider to keep from shooting forward. Maybe the shoulder from the brake helps with that, but it sure doesn’t look comfortable. I guess it’s a non-issue since you aren’t really supposed to be on them much, but for combing, descending and cornering, I’d like a better wrist and hand angle.

The least expensive new Speedmax with Di is 6000.
So I can see Trek asking 6000 for a 105 electronic and throw away wheels.

I was thinking the same thing regarding the brake levers on the basebar. If I get one, I will likely want to add some type of wedge there that tapers down to the base for some extra bite. Not long, but not an immediate termination either

I wonder if the tri version will be different than the UCI legal one. I also like the looks. It’s like the old Trek Transition a bit

You guys see the Tri Version (or supposed version) from the Race this past weekend? I like the color way of the chromed or appled blue. But, I thought that the bike itself was VASTLY different than the UCI version based on comments about it.

Anyway. Curious to see in depth pictures and prices. I likely won’t be able to afford the beast, so I will continue with my current SC for many years.

I was very underwhelmed. Aside from the paint job.

I see they are recalling some of the 2022 Treks including the Speed Concept. 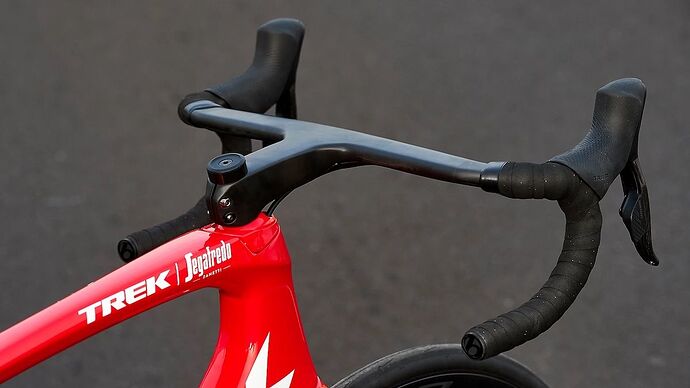