Thanks again for providing details and confirming the gist. I have promised my mitochondria that I will steadfastly resist the temptation to do 5x 8 maximal efforts 5 days a week.

Or at least take more than 2 weeks to build up to it.

I don’t know, I started my journey in the 80s as well. Winter training was small-front-chainring only. High cadence. “S” was mainly “slow”. And this was the intention. I also recall reading in Greg LeMond’s book from the late 1980s how he detested thesw small chainring junk miles advocated by USACyling.

I started in 80s in California. Nobody I knew discussed training. Occasionally I’d read articles about intervals or LSD in a magazine but nobody was implementing stuff like that they way they do now.

Basically people rode a lot and then let racing take care of the rest from March to September. It worked ok. I got progressively better over 5 years.

I recall that the cat 1s were putting in a lot of long slow miles. I never understood why at the time.

I raced in France for a year when I was a student and had a team mate try and teach me about big ring low cadence climbing. He wasn’t a good teacher though. My guess though is that Europeans were probably farther along in training knowledge.

What size was that small front chainring?

To be honest, even the slow small chainring rides will have been steady.

I remember 42 was the standard and 21 was a leisure back in the 80s. LSD and slow cadence repeats were part of the cycling lexicon in Palo Alto and Davis were I started riding and were studying.

But above all they were slow. There was the fear that your heart explodes when you shift to the big ring. Or that you burn out by January.

53/42 was the standard. 52 for Juniors. 39 was available for the small ring but if you had any decency as a cyclist this was not an option.

The funny thing is, it still worked and got people fit. Maybe it was more miserable than modern methods?

I was thinking, you probably weren’t that slow, because the gearing was different. But then again, winter clothes were much bigger too…

Believe me, it was slow. And it was supposed to be slow.

What are modern methods?

Modern training methods - not doing those long slow winter rides for example, but zone-based base training. Though maybe the new way is to just ride on zwift all winter, I suppose you could do that slow too…

I suppose you could do that slow too…

Yesterday I had to do my endurance ride in the mountains. I had to go slow, cadence 50-65 to keep the HR in the apt zone…you do push more watts this way tho. Cheers.

Admirably laid out, thank you

not doing those long slow winter rides for example, but zone-based base training

LSD is still a staple in many programs these days. In a true polarised model LIT is LSD. If not your HIT is not hard enough. And zone based training was already around in the 80s. After a block of LSD only you would often include plenty of tempo work. East Germans and Russians were big on zone based training and their coaches brought these idead to West after the Iron Curtain fell. However, the West alredy knew about this methodology before. All the work on lactate testing in West Germany in the 80s or the famous Conconi test from Italy. Heart rate monitors were as trendy as powermeters today. At least when you took racing seriously.

The funny thing is, it still worked and got people fit. Maybe it was more miserable than modern methods?

Pros definitely got faster over the years. Sure that’s partly due to aero-gains and general equipment improvement, but a huge chunk surely is down to proper training methodology and nutrition (steak for breakfast anyone?!). 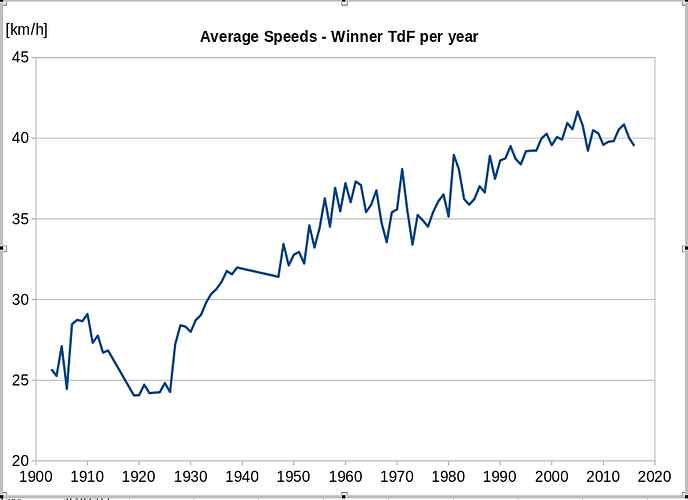 I’m loving the history lessons - especially from different countries - thank you. We all need to look up sometimes.

So for those that have contributed on that, is the idea of the ‘time crunched’ cyclist new? By definition these are the guys (I have my hand up) looking to really optimise the effects of training time and who are driving these discussions on methodology.

Running and swimming follow the same trend, and they are substantially less equipment based.

LeMond’s 1987 book considers mainly younger, highly competitive athletes. However, there is a short section on the ageing athlete where time is a limiter. He simply suggests to cut down the endurance riding. A 20hr athtete should do 40% of endurance riding, a 10h athlete 20%.

With a typical weekly structure Sprints-intervals-endurance on Tu-Th the main challenge would be the enurance ride on Th for a time limited athlete. He makes the following suggestion:

He says replacing endurance with work at the anaerobic threshold.

apart from this, remembering the “older” guys in my club, they just rode and would complain in the club races that they didn’t have enough time to train. And the very old guys had plenty of time to train but would always just cruise around which would not make them faster either.

I think this whole idea of being time efficient with everything you do, and optimizing everything so you can cram as much as possible into every minute, is fairly new. Before that, if you liked and wanted something, you’d dedicate a lot of time to it. If you didn’t have enough time, you just found something else, or accepted that you’d not get very good at it.

The other thing with regards to training is the importance of racing. There used to be road races everywhere, and every weekend from March to September (at least in the UK), so racing regularly would play a big part in the racer’s fitness.