I am planning on riding this route next week, 3 big swiss climbs. 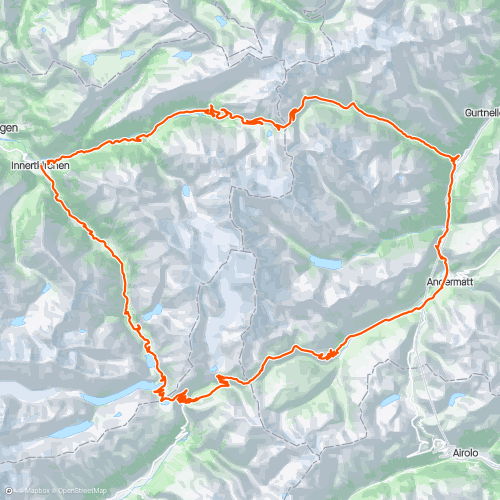 I need to start/end at Innertkirchen - any tips? I’ve not ridden in the mountains before, but I’m confident my fitness should hold up (I average 9hrs/wk, ~4w/kg). I will pack a DWR jacket, lights and carry plenty of fuel.

It is a beautiful ride. Enjoy it. Susten is a beast at the end. You can refill your bottles midway at a fountain or cafe.

You should be fine with your fitness. Depending on what time you start you definitely won’t need you lights. But better be safe than sorry

Thanks, I’m really looing forward to it. The lights were more for any tunnels I may pass, also I plan on leaving ~5:30AM so will hopefully see the sunrise on the Grimsel.

With regards to water, I don’t really want to carry too much, but was paranoid I’d not find anything much. I’ve heard there are fountains, but I like to be as self sufficient as possible, just in case!

I started around 6am at the top of the Grimsel as I couldn’t find a spot to stop near Innertkirchen, so I had the nice descent into Gletsch, before the Furka. The Furka was OK, but it highlighted that I was not accustomed to altitude and my Z3 power was producing Z4 HR! Sign of suffering to come!

It was a nice climb following the Furka train track and watching the sun rising over the mountains. Passing the Rhone glacier and Eisgrotte (which Daughter subsequently loved as she though it was Elsa’s palace from Frozen

) - the place is a proper tourist trap though and unfortunately it was in quite a sad state, the pictures from ~50 years prior were a stark reminder of the problems we face with global warming.

Next up was the descent into Andermatt - great fun at that time of the morning, I probably saw 2 or 3 cars/campervans on the road… full gas!

So now the Susten… what a beast… it’s a truly beautiful ascent and thrilling descent, unfortunately time had moved on and the motorcycles and sports cars were out so I found myself sharing the road finally! I ended up chasing a touring bike with pillion down this descent as it gets very twisty I was much quicker than the heavy bike.

Stopping for water at the natural springs along the way was a nice (and essential - the infrequent cafes were still shut) novelty too.

After a quick water/toilet stop in Innertkirchen it was time for the Grimsel, which I had driven up the day before. It’s a long and steady climb and by this point I was suffering. I stopped in Guttanen and emptied the convenience store of Coke/Ice Cream and Jelly sweets as I was in dire need of carbs and a morale boost! The climb has one or two places where cycles can take the ‘old’ road rather than the tunnels, these are very pleasant, safe, and quiet.

I rode quite a few other cols in Italy and France on that trip, but nowhere came close to this route, truly epic and awe inspiring scenery I’ve not experienced anywhere else.

Thanks for the advice and hopefully I’ll be back one day soon!