Gravel Bike - suspension or not?

Interesting video, thanks for sharing it!

I agree. But washboards also can be rough for any gravel suspension. If any gravel route had a significant percent of washboards I’d either avoid the route or ride a fs mtb.

This is very helpful as washboards were one of the main reasons I was interested in the Grit fork.

I wish our tracks were that smooth and wide, lol

If your bike is still setup for bike packing, can you post pics and / or describe your setup. I’m thinking about bike packing the GAP and C&O Canal Towpath - 355 miles. Thanks!!

Washboards stink no matter what unless you have mtb suspension

They’re bad even on MTB suspension. Course, you ride them faster - but still get to a point where the fillings are shaken out of your teeth.

I have the Diverge with future shock. It makes a big difference vs. my Domane. The Redshift stems are supposedly pretty good also.

For the kinds of gravel I ride, I’ve found the Diverge to be in the sweet spot of bikes. 20mm suspension. Can fit 47mm tires, maybe a little bigger. Great for 99%+ of terrain I ride.

If I go bike packing, I’ll likely use my FS MTB. Not the ideal tool for the job, but better than being underbiked on my Diverge. If I really get into bike packing, I think a cutthroat or similar would be the right bike.

I wish our tracks were that smooth and wide

You’d be surprised how bad those washboards will beat you up if they go on for a couple of miles of endless jittering like that. My forearms, wrists, and elbows end up way more sore from that than from a couple hours of mtb.

It’s a fantastic bike. I chose between the entry carbon Diverge with FS and the E5 in 2020 and chose the E5, although price wasn’t a main concern. I just figured as a rookie I might start simple and then trade up. To be honest it’s been such a lovely and versatile bike I don’t feel the need for anything else (aside from hydraulic brakes!).

The point about bike fitting in my case solved achy wrists and intermittent lower back pain. After that I don’t ever experience issues from any kind of riding.

There are a few Australian sites that have just put up details of a new Giant Revolt X range. I don’t see them listed on the AU, UK, US or JP giant sites. The 0 has ‘Fox 32 Float AX Performance Elite, 40mm Forks’ and the 1 ‘RockShox Rudy XPLR, 40mm Forks’ 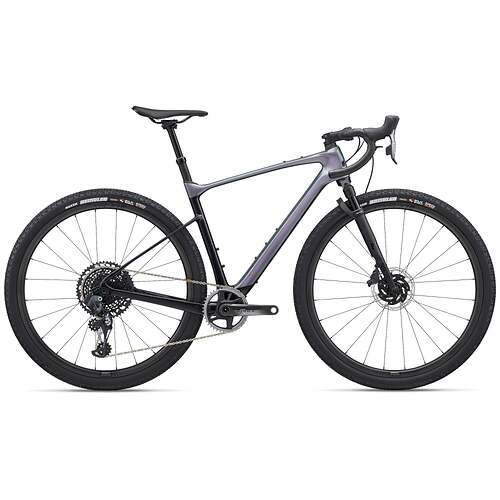 Washboard descents, sketchy dirt, gravel and rocks of all shapes and sizes. You never know what you’ll get on a gravel ride. This new Revolt with front suspension helps you float through it all with speed and control. The Advanced composite frameset...

It’s somewhere in the middle between a traditional gravel bike and something like a Cutthroat.

To make a MTB analogy, this is the equivalent of a trail bike - in between an XC bike, and an enduro bike.

So do you buy a bike like the Revolt? Or buy 2 bikes

- a traditional Gravel bike like the Checkpoint, and a Cutthroat for more gnarly trails and bikepacking?

I think is comes down to the kind of gravel / trails you’ll be riding most often. And get what best suits for 95%+ of your riding, vs buying something for that extra 5% “just in case”.

Didn’t need lights as all riding was between sunrise and sunset on rural gravel roads. If we were in deep sh!t, I could make a call and we would need to wait 3-4 hours for a lift.

It was one of my lightest packing trips to date having taken a calculated risk on packing gear.

@SirDAN Thank you so much for these details. This is super helpful. One of my only concerns about the Seigla is the lack of mounts for a pannier or on the fork but rear saddle bags, thru axel adapters, and clip on options mean it can be used for bike packing. I’m still very much torn between the Seigla and the Revolt, then within the Seigla between the Grit fork or a rigid setup. Again, thanks!

I know I am a broken record on this, but…there is a HUGE difference between these two bikes in terms of BB drop. The Lauf has a 65mm drop while the Giant has an 80mm drop. That is going to make a big difference in how the bike feels, especially if you load it up with packs / panniers.

@Power13 Yes, I’ve been arguably focusing mostly on reach and stack, then head and seat tube angle. The Seigla has 7mm drop less than my current bike whereas the Revolt has 9mm more.

For general gravel riding (think solo rides) with the occasional event (I won’t say race) and bike packing trip, which would you recommend and why?

So a lot of this is personal preference…but I have always been an advocate of a lower BB (even going back to the days of “Crit” bikes having higher BB’s for cornering clearance).

IME, a lower BB actually improves handling because it is more stable due to a lower center of gravity. When I got a new gravel bike in 2021, a lower BB was top of my list for features. I was using a first-gen Crux as my gravel bike (69mm drop, I think?). The bike always felt “high” to me. I noted earlier that I took a hard look at the Laufs, but once I saw the BB drop, it was definitively ruled out.

I ended up with the Aspero (BB drop = 76mm), but the Revolt was also strongly in the mix. Had the LBS been able to get one, I likely would have bought one. The lower BB is noticeable and I feel much more confident taking tight corners on it.

Others prefer a higher BB for things like pedal strikes…but unless you are in really technical stuff, I don’t think this is an issue for gravel bikes.

One of the compelling reasons I went with the Seigla was the lack of mounts. Had them on my first gravel bike, used them once to test/trial, and never again.

If I was going solely bikepacking setup, I would likely go with a Salsa Cutthroat. Proven itself time and again.

The Seigla main use is racing gravel, with the benefit for 57mm tyres if going bike packing. I don’t particularly want weight on my forks/front (bar bag I do have and do use), and I foresee myself getting a Tailfin aero pack which packs a lot and can be installed on the Lauf.

Choose the bike for your main use case.