Am at the point where I’ll just cut my losses when they stop replacing it. Has been something like 3yrs at this point so if I can get them to give me some $$ for it which I feel they might I won’t complain

Why would they give you money if you are 3 years post-purchase… which is 1-2 years beyond the stated product warranty? If they’ve already done one or more replacements within that period, it’s fair for them to cut it off at that time.

Considering they were willing to comp out a kickr 18 in early-mid 2021 after numerous issues had it not been purchased through a retailer there exists a possibility of a similar exchange being offered. Not something I expect or am hoping for but still an option on the table to inquire about

Just to update, the distributor in Australia is sending me a new one. I just had to cut the cord and take a photo of the cut pigtail/cord section with the serial on the bottom and send to them. I am free to dispose of it in an environmentally friendly way. They did not say that I can’t firstly disassemble and see why it’s failing and then share the results on this forum!

As a side note, I am slightly surprised given the day and age of litigation we live in, that I was not asked to unplug it from the wall before cutting the cord. I am no fool, at least not with electricity, but there are fools out there or at least people that don’t know to unplug cords before cutting them.

If I get ANY belt slippage within the 12 months of initial purchase, I will likely seek out a full refund, given the experiences of people in this forum. At the price it is, it really has to last at LEAST 5 years, which it does not seem likely it will.

I would recommend waiting the three months extra time duration it takes to get delivery of the Elite Rizer, together with the extra hundreds of dollars you need to spend, instead of the Wahoo Climb, until they publicly declare that they have fixed this issue. I have a bulged disc injury which is why I bought the Climb, I need the variation on my back. Pretty annoyed I have to cut the cord rendering this device COMPLETELY useless until the replacement comes to be honest. At least I could have manually shifted it to +4% and -10% until the replacement comes. Now I will be fixed position for weeks or however long until the new one arrives.

I’m fairly certain that all of my belt slippage was when I was standing up grinding at 400W or more, when the device starts lifting. Just too much load and force when it’s trying to move against me. I’m not at my race weight, I am now 89 kg which is heavier than most fit cyclists, but the reason I’m on the darn trainer is because I want to get back to my darn race weight. If I was at my race weight, I would be less inclined to be on the darn trainer to begin with. It was definitely NOT improper use. You are most definitely supposed to be standing up and griding it out on Zwift or on TrainerRoad!

Also of interest, I see you can buy replacement belts from an ebay store called DBS-belts. So it will be interesting to see if the belt that has slipped visually appears defective in any way, and to get hands on this third-party replacement belt. I am genuinely very curious about why this is a common issue and why it appears to be so difficult to amend and avoid it from being an issue such that Wahoo haven’t already addressed it, and why they’re still selling them as-is with this known issue.

Connectivity with the Wahoo app seems fine and I’ve installed the latest firmware. When I hit the reset button on the remote and it goes all the way up, the tilt on the app shows 0%. When I bring it down to the level of a 700c wheel, it shows a high number ~15-17%.

I’ve taken it apart in the hope something just needed to be flipped around but it wasn’t as obvious as I was hoping and it’s still doing the same thing (maybe even worse) after re-assembling it. Tried getting some help from Wahoo although it’s likely out of warranty but once they heard it was opened they said there was nothing they could do to help. 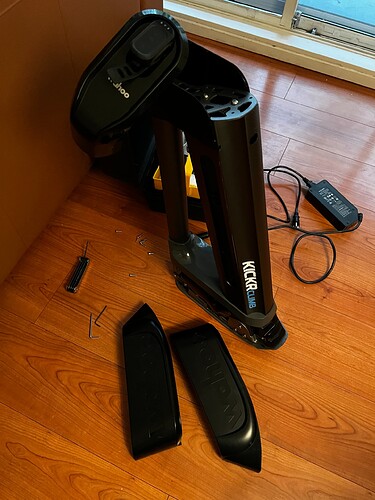 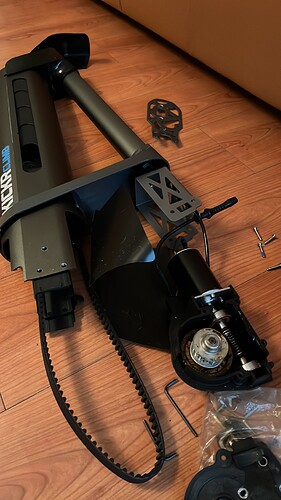