To give you a few more options, I think the Open UP, Open UPPER, Open WIDE, 3T Exploro, Cervelo Aspero and Vielo’s V+1 are all similar options with carbon frames.

My mate has stripped his Vielo and bought an Open Up, both beautiful bikes

If I am ever in the fortunate enough position to replace my aluminium Fuji Jari I think I’d go for Ti as robustness out weighs for me circa 500g. Its same with my road bikes I opted for a ti Kinesis initially and after 40k miles replaced that with a Ti R-Jack

Edit, PS my R-Jack is a custom frame and I know a few other local (to me) dealears that also do custom ti frames

I consider a Ti bike to be what you get if you want a classic “forever” bike. Things like the dropped chain stays, d-shaped seatposts, sub-1000g farmes weight and aero tubing are just really hard to do in Ti, but Ti has asthetics and ride quality attributes that you aren’t likely to get with carbon.

If you are racing or hunting KOMs, then go carbon. If you want craftsmanship, durability and/or custom geometry Ti is a much better option.

I just picked up a Lynsey Pro GR and the quality is superb. Obviously not in the same price range as the Moots and others, but still a gorgeous bike. I’ve not ridden it yet here in the frigid midwest, but am anxious as hell. BTW they have a promotion for 25% off right now and some upgrades free. I bought mine, was estimated for 2 months and got it within 3 weeks, so it’s one you can actually get. I’m anxious to get into gravel and between myself and the shop mechanics, steel or Titanium was the best choice…

To be fair, and full disclosure … despite my love of Ti bikes, I am taking delivery on the item pictured below in two weeks (as mentioned on a different thread). So I can talk out of both sides of my mouth

I really only want one “forever” bike … right??? 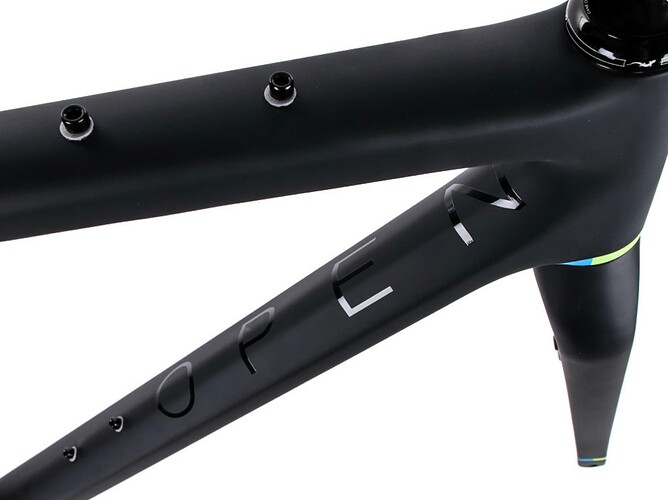 i do wonder on gravel, if the ride quality of titanium would decrease fatigue and make of for the weight and aero benefit of carbon…??

Doubt it…when you have the large tire volume that you have with gravel bikes, the ride characteristics of frame materials are significantly reduced.

For me, a great ti gravel bike just seems like the perfect combo….dunno why, but it works for me. Hopefully it will be a Moots one day….

My mate has stripped his Vielo and bought an Open Up, both beautiful bikes

Yeah, and their N+1 is inspired, too. Apart from my Strada the most beautiful dropbar bike I know of. Very opinionated, 1x, right up my alley

Also, on a do-it-all bike weight isn’t that important, at least it shouldn’t be concern no. 1.

I have a Moots Routt RSL. Let me know if you want any photos or have any questions. I’m SO happy with it!

Awesome!
I’ll be hitting you up with a DM

i do wonder on gravel, if the ride quality of titanium would decrease fatigue and make of for the weight and aero benefit of carbon…??

I don’t know whether the frame material has that much of an influence if two bike frames of different materials are engineered to have the same stiffness properties.

The most important part of the ride quality equation are tires and tire pressure, and second comes your seat post. Your frame is a distant third. (I’m assuming you have no suspension in your frame and fork here.)

One area where carbon bikes could be at a disadvantage (unless engineered correctly) is when your riding has e. g. some risk of rock strike or so. Carbon frames can deal with that, although that requires the right choice of fibers (which are less stiff, but more resilient).

A word about Ti frames. Part of their magic carpet ride is their “springyness.” That springyness can be a problem on gravel on certain features. My Ti bike has an oversize downtube, massive carbon fork and beefy dropped seat stays. Not particularly robust at the crank as its an exterior threaded BB. Its great most of the time but it is a handful on washboard. I think the ti frame flexes slower and doesnt reset before the next bump. Much like an offroad shock that has way too much rebound. If the hits are far enough apart, no problem. My aluminum frame bikes dont do this but are harsher overall. Ive run several wheel sets, tire sizes and pressures on the Ti and its the frame causing it. I would think twice about trying to get the lightest Ti frame if you encounter that kind of stuff on your gravel. You might try and find someone local and do a test ride. YMMV

My aluminum frame bikes dont do this but are harsher overall.

I think your analogy to shocks is apt. It sounds to me that the additional stiffness is the precise reason why your aluminum frame can deal with washboards better: stiffer means you need more force for the same deflection, and your frame will move back in its original position faster. With a softer frame, it’ll take a bit longer to undo the deflection in the frame.

AFAIK washboards are notoriously hard on bikes and riders.

Moots Rout RSL at the top of my list.

Pick the bike up from the factory in Steamboat Springs, and ride some of the local gravel roads to break it in. Best gravel in the country in my totally unbiased opinion :). 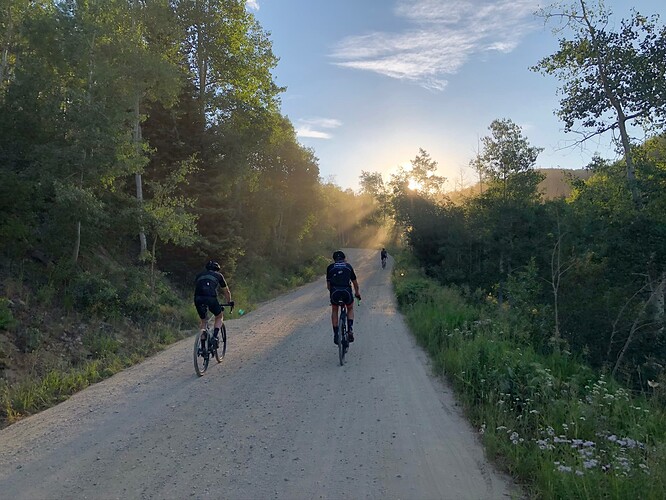 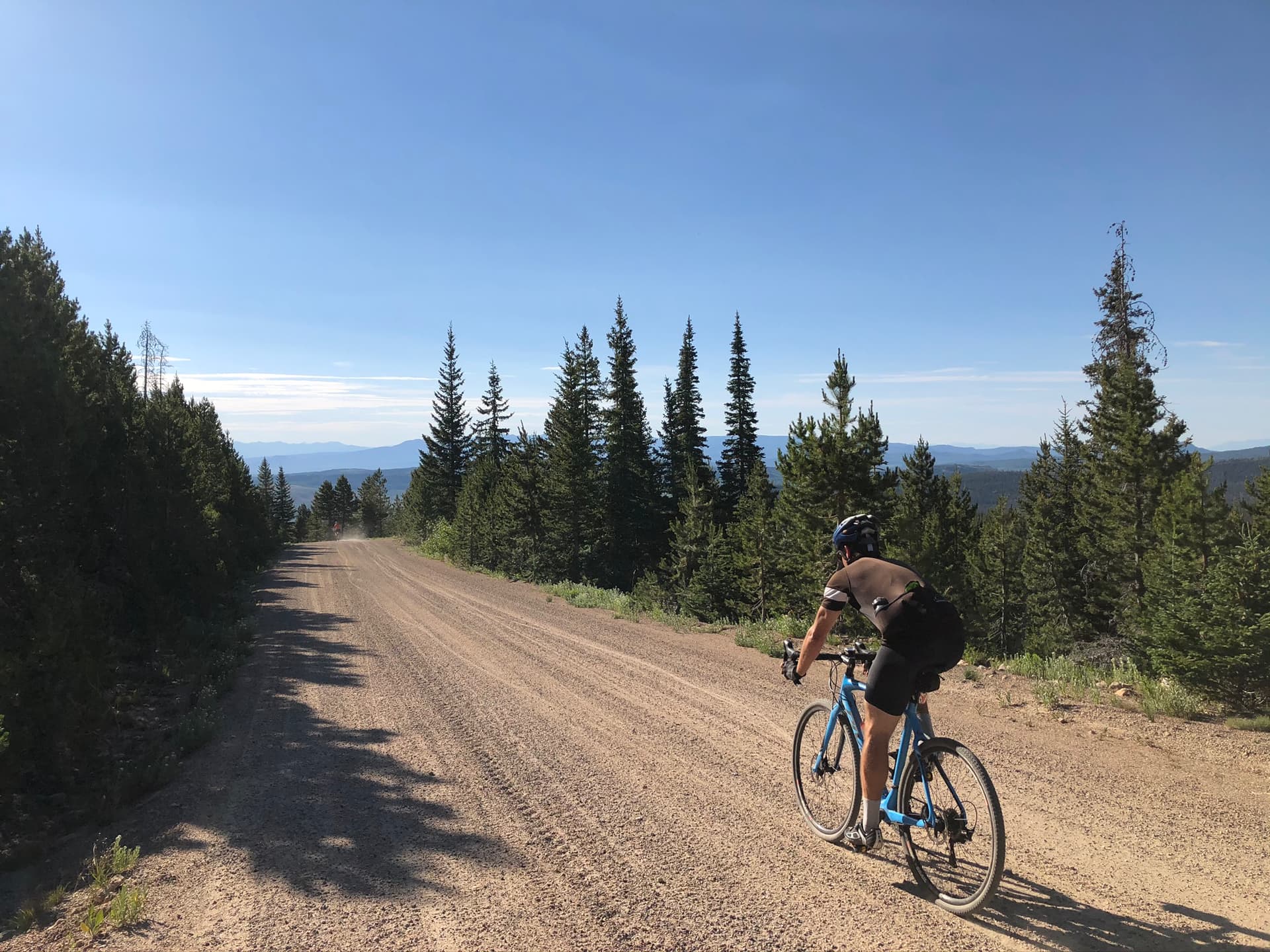 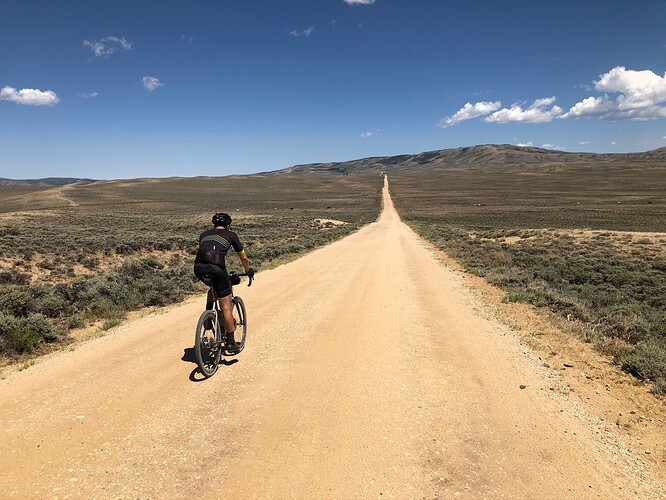 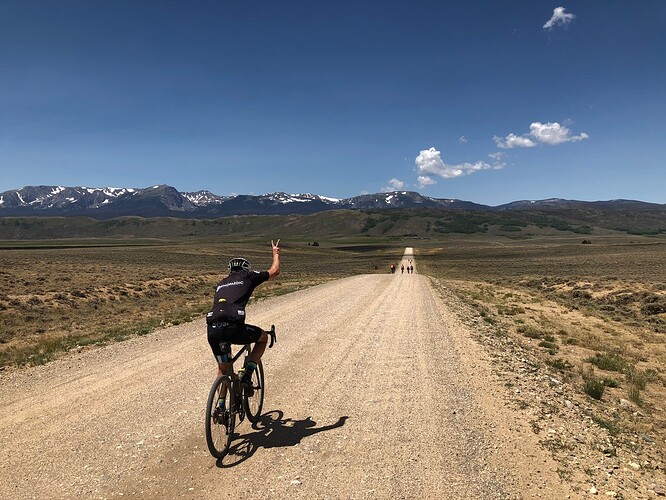 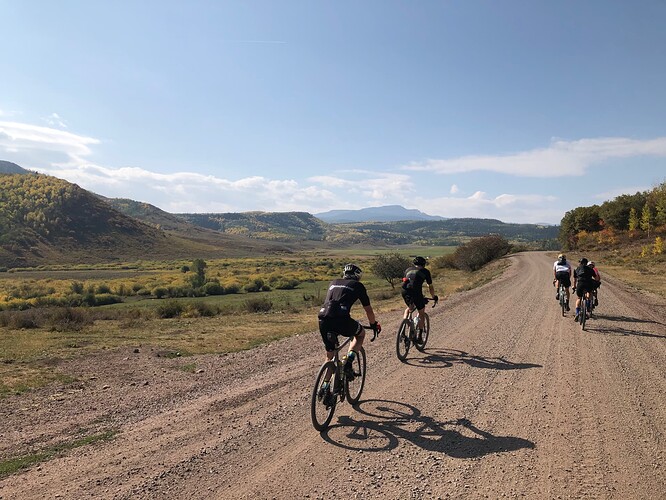 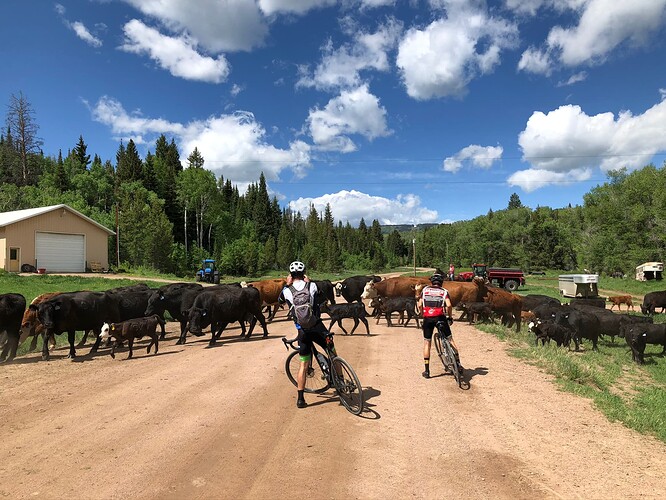 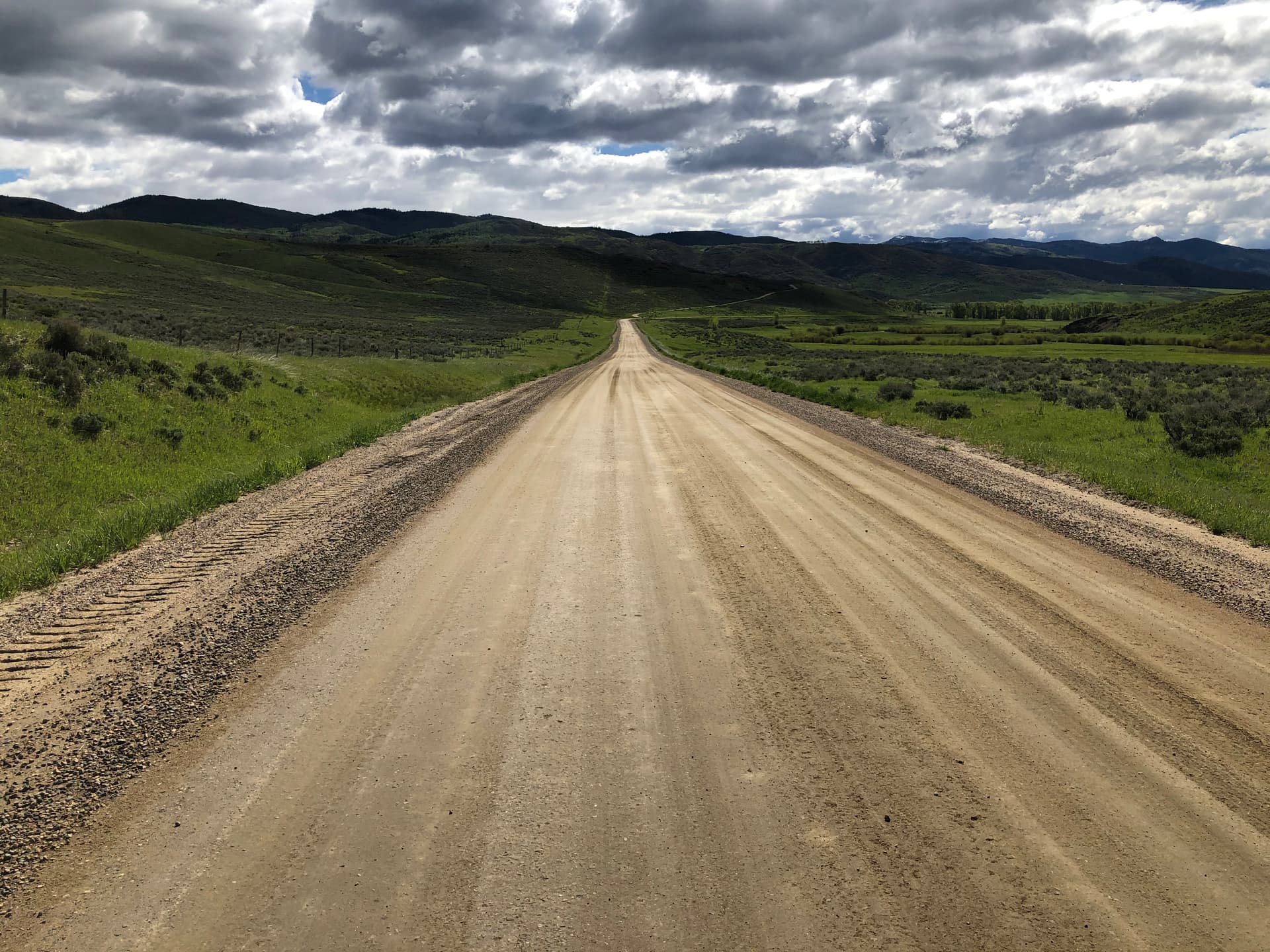 I’m building a Litespeed Ultimate Gravel as a groadie. The frame is beautiful and I think it’s a shade under 1400g in size L. When I’m done I think it’ll be lighter than my Pinarello Dogma F10 when in road configuration but that’s based largely, as others have said, on component choices.

I have a Litespeed Gravel (very similar in geo to the new Watia). Like others have said, I don’t particularly notice that Magic Carpet Ride™ quality on gravel, as tires dominate ride feel on rough surfaces. I can also vouch it’s not for weight weenies (with pedals, bottle cages, and a Shockstop stem it weighs in at 9.25kg). That said, it’s by far the most comfortable bike I’ve had for all-day rides.

An advantage of Ti I don’t believe has been mentioned yet is its durability. There’s a definite peace of mind while racing knowing the frame can take whatever beating you give it. My previous gravel bike (Salsa Vaya) had many chips, small dents, and paint rub from my frame bag. I get even rowdier with the Litespeed and it still looks like the day it arrived.

I used the term robustness but yes that’s right. Your ti is lighter than my aluminium frame though and although I can be a bit of a weight weenie that robustness/durability would win for me. A very nice bike btw, I should have hung on for a ti but they were all out of stock when I was looking

My Linkskey GR270 is heavier than my Pivot Vault. I’m loving the TI feel. I would recommend also going with a TI seatpost. I use the GR for all things gravel and the vault for cyclocross.

I have the GT-1 45 in a custom paint job by Aaron. I know him personally. I’d take a look into their program as you can get a custom paint job on them. My wife’s and my bike are in the Titanium bike thread if you search for it. The Ti is way smoother than carbon but will be about a pound heavier like said here. Especially with gravel I prefer the smoother more comfortable ride over having something slightly lighter. 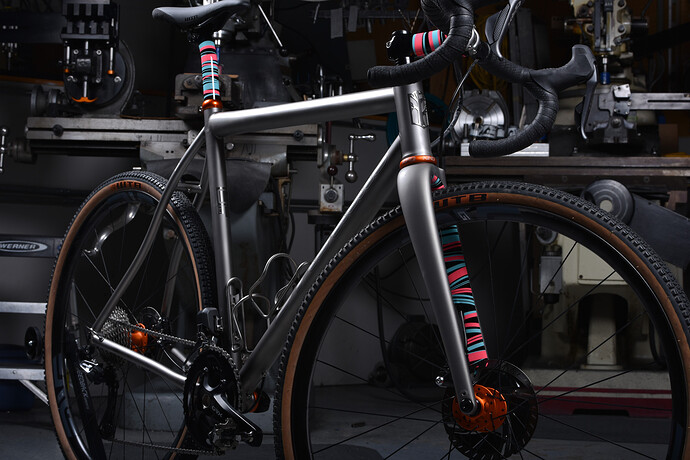 Mosaic Cycles handcrafts custom titanium bikes made to order, located in Boulder, CO. 12 week delivery made possible by working with the best bicycle shop partners in the world.

So a bit about me - I’m 31 and in Chicago. I’ve done a few races, but for the most part I just want to do fast group rides & stay competitive in big races/ rides. Not a lot of hills here in Chicago though!

I have a Madone for the fast road rides & my Moots for gravel. The Moots is obviously not aero, but the Madone is one of the most aero road bikes out there & I can honestly say I never have felt that the Moots held me back and it doesn’t feel much slower than the Madone on tarmac. I have the older version of the Routt RSL (2021?). I bought it last summer. That bike was much more of a road/ gravel bike hybrid (Ultegra instead of the gravel groupsets/ 40m tire clearance instead of 45), but I think it’s relatively the same feel.

I have a buddy that’s from Vermont but now lives/ works in New York. He rides the Specialized Diverge as his gravel & road bike & says great things.

At the end of the day, if speed is number one, I’d go with a carbon gravel race bike like the Diverge or Trek Checkpoint. But if you’re Ti curious/ want a beautiful bike that attracts attention/ want that “forever” bike/ etc, I’ve never regretted buying the Moots. I’d go with the upgraded carbon wheels instead of the Astrals. I didn’t upgrade & I don’t regret it, but I don’t climb big hills…you definitely should go carbon wheels.

One more thing - Moots has a demo fleet at various dealers. You can always try to find one close to you & test it out.

Let me know if you need anything else!