My GP 5000 TL with less than 1000 miles exploded over the weekend. I must have had a puncture and was losing air. I pulled over only to notice a small bulge in the sidewall…it looked fine before I left home. Tried to get it to a rideable pressure with CO2 and it exploded with a big BANG.

Has anyone had a simlar issue with Continentals (or other tires?). Was I doomed as soon as the bulge appeared? 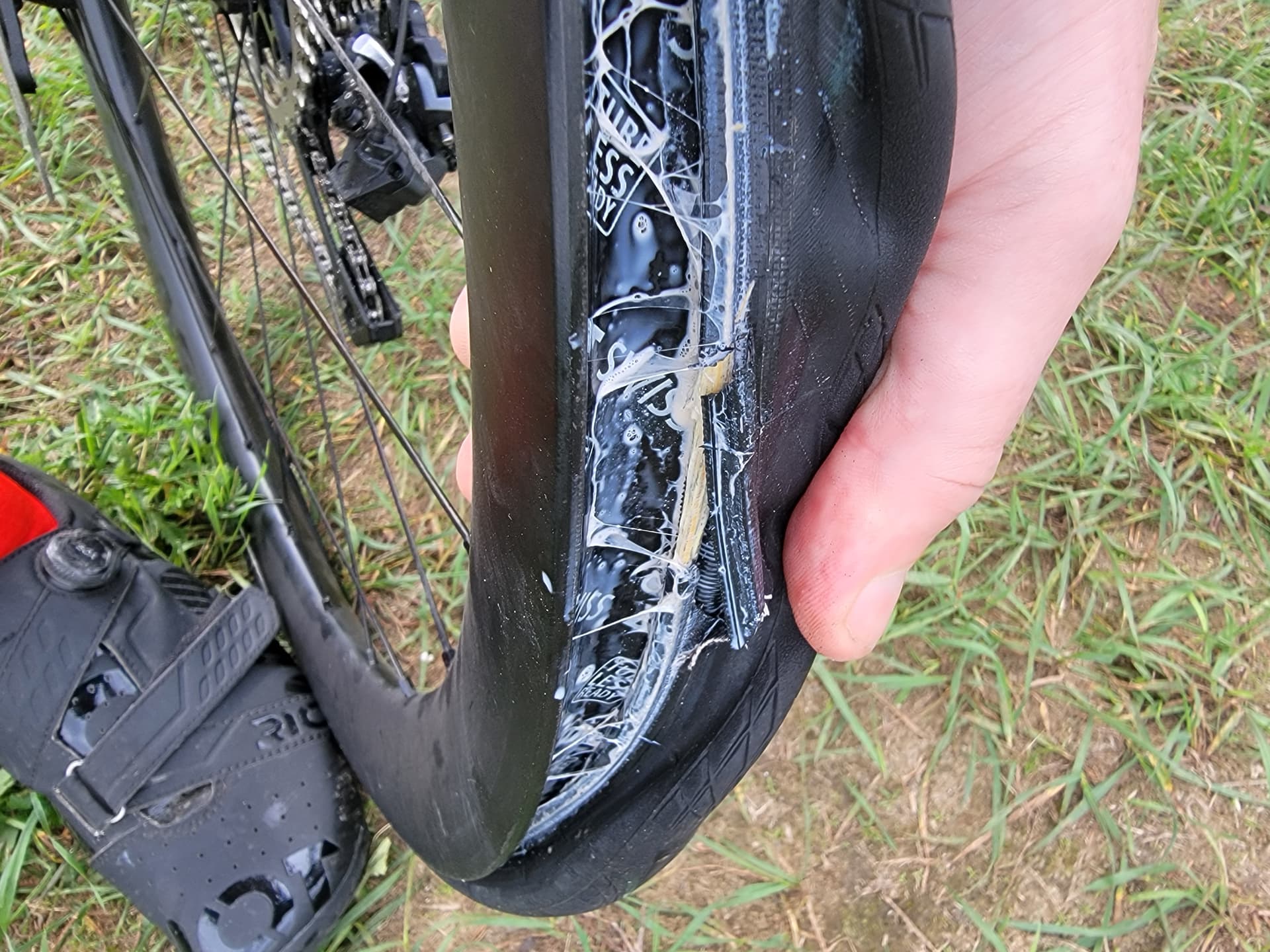 is that a broken bead? Hard to tell with the sealant mess. 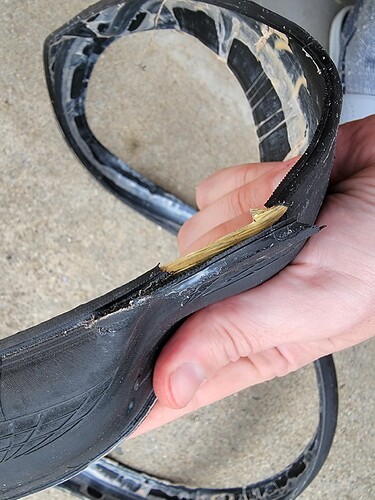 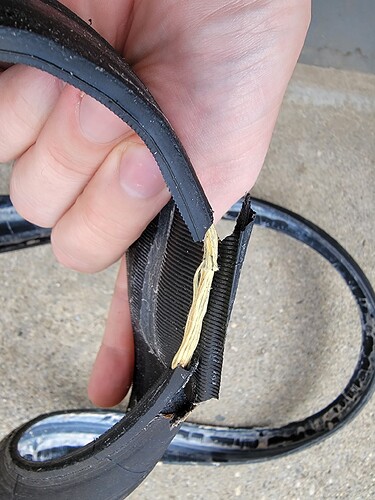 Yikes! I would think either it was damaged when installed or a defect. I’ve never seen anything like that and can’t imagine how you could “flat” like that.

If it was damaged during installation, would it have lasted as long as it did? It was installed this summer (late July I think) and I had a bunch of rides on it. I was even thinking how great these tires were (before the boom!) because they held air great. I lost maybe 5 PSI over night.

Same. Five plus years ago I had a mangled bead (Hutchinson Sector 28), and a bunch of sidewall tears, but nothing like that.

Its my cake days so commenting extra

I have a seen a 2 tires over the years (non tubeless do that) - I think the last was a Michelin Pro 3. The rider emailed them pictures and they shipped him a new tire. YMMV w/ Continental

If I had thrown a tube first instead of trying to inflate it a bit, do you think that would have been ridable enough to get a few miles to civilization? Just trying to be better prepared for next time (but let’s hope there isn’t a next time

no tire expert by any means but I assume the bulge was when the rubber on the inside begun to break - a tube may have gotten you home - but the bulge is pressure looking for the weakest spot to escape.

I did that to a car tire once by hitting a curb hard enough in the snow, the inside rubber split, so then it was just a ticking time bomb

I’d inspect the rim for a sharp edge. Enve sent me a replacement rim, and there was one short 1/4" section where it was cutting into the tire. Sent Enve a pic of a notch in the tire, and they replaced the wheel. 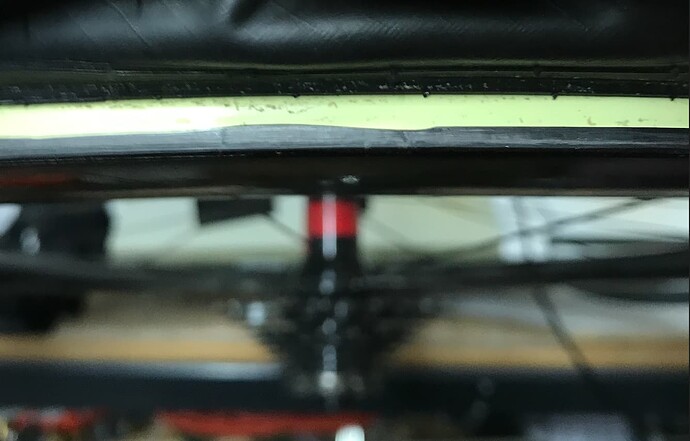 and how it was gouging into the tire just above the bead: 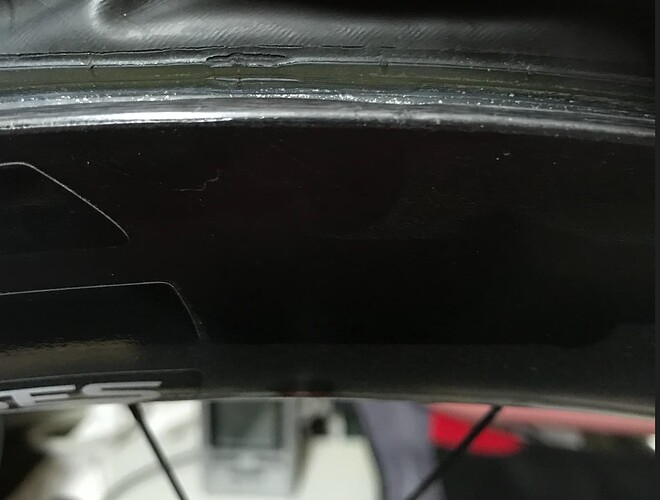 Touchwood the new 5000TRs seem to be easier to fit without sealant leak. I put one a few weeks ago on a Prime wheel and one on tonight on a Hunt wheel.

Winter hit this week, and it hit like a Lastkraftwagen, as we say in German.
Freezing temps and windy as hell.
This being my first year fully on TL, I was wondering about the temperature stability of Orange Seal
Information about it super conflicting.
My issue is, that I haven’t had a great track record with OS Endurance for road. It didn’t seal until around 20Psi and didn’t hold air well. So I am basically stuck with Regular.
I found this chart on its’ winter limitations: 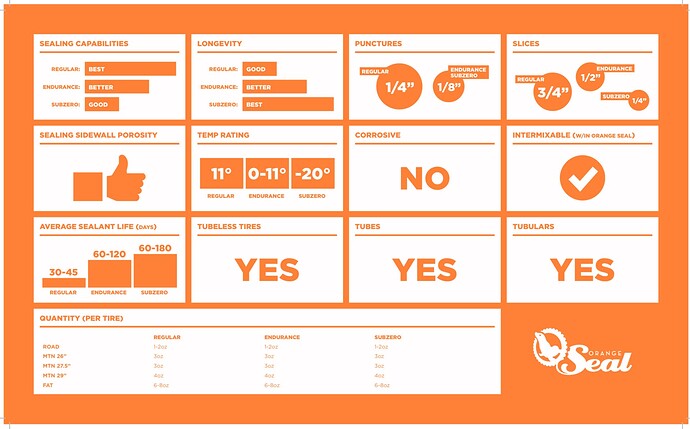 image1920×1195 144 KB
Since everything here is in imperial, I am guessing the Temps are Fahrenheit, so the regular works down -11 C, Endurance down to -20C, and Subzero down to -29C.
However, many international outlets and stores claim otherwise (some claim these are Celsius numbers, others claim Regular holds up until -20C). What concerned me most, was this article (https://bikerumor.com/review-orange-seals-endurance-tubeless-sealant-lasts-forever-but-cant-take-the-cold/). They claim endurance only works down to 0C (32F), and tested OS Endurance at -13C (9F). And it didn’t seal, didn’t hold air etc.
So, what’s your experience. Are the orange sealant numbers (which I understand are in Fahrenheit) accurate for you, or have you experienced otherwise?
HLaB November 23, 2022, 10:45am #1002

Ive no idea about Orange Seal but for me Stans coped fine with 4months of winter in Scotland. In the Spring I did hit a pothole that unseated the tyre but I doubt the sealant/temperature affected that bad luck.

I have used Orange seal endurance with my mtb tyres in freezing temperatures (all the way to -15 deg C) and so far have had zero issues. I have used old, non-TLR Schwalbe Ice Spiker tyres and they have stayed seated regardless of the temperature. I have not had any punctures during the winter rides, however, so I have no idea if the sealant is able to fix them in freezing temps.

Just got a set of the new Specialized S Works Turno 2BR T2/T5 (not the RapidAir ‘race’ tyre, what a mouthful) and set them up on my Farsports Feder rims. Just about managed it with a track pump and a hairdryer to get the beads supple enough to pop on. They weighed 268g and 279g in the 28c size.

First ride impressions are nothing special compared to Conti S TRs that I’ve been running. Not especially supple, not especially fast, but no wobbles or scary moments either in greasy conditions.

I rode the previous gen RapidAir for 1000 miles and then recently replaced with the more training oriented T2/T5 in 28 rear and 26 front. The RapidAir are more supple. The T2/T5 are more like the 5000 S TR but easier to install.

All of the fast road tubeless I tried:

Have experienced a rear tire flat requiring an inside patch within the first month of riding them on county highways with a lot or road debris.

The T2/T5 and a no exception, however it would only go from 85psi to 60psi on a two ride before I had to remove and patch from the inside. So that was an improvement over the others above.

Picked up a nail in the rear (Michelin power road) last weekend. It was firmly lodged in the tire. I got a dyna plug ready, pulled out the nail and nothing. no sealant, no air coming out, just self sealed. Finished the next 55 miles with no drama.

So thumbs up from me.

Many will disagree but for me generally tubeless meant, more expensive tires, slightly more hassle/$ seating, messy cleaning out old sealant, no real or perceived ride improvement=back to tubes for me…For now.

To be fair I think if I had a pump (I have yet to get a pump that will seat tires) it would make everything more convenient. It’s irrational that I feel spending $100-200 USD on a pump is too much but, I sort of do. And with that any recommendations for pumps?

Got a roofing staple in a rear 5000 S TR 30mm the other day. Only noticed because there was a clicking sound coming from the rear as I was riding. The staple was lodged all the way in. I got my keychain Leatherman plyers and pulled it out. Rush of air/sealant comes out. Turned the puncture downward and smacked the wheel against the ground. It sealed.

Rode another 18 miles or so, measured pressure when I got home. Went from 65 to 60 psi. Not too bad. So far the tire seems to be holding air fine. Am I correct in thinking that I don’t need to patch it?