Looks like Lauf is the latest to go direct to consumer. I’m in the market for a new gravel bike and $6590 for the Ultimate with Red/xx1 group, power meter and DT Swiss GRC 1400 is a screaming deal.
Does anyone have experience with the True Grit? Thoughts on the fork?

Did you end up going for the True Grit? Am interested in your experience!

I owned a Lauf and it was a nice bike. I bought it long before they went consumer direct. It was extremely light and a quality build. The fork does work and eats up minor chatter. The downside to the fork is that when climbing on tarmac, I could feel the movement, more from sway than from bob. Also, I just never got along with 1x. I have both mtb and road background, but I just never got on with 1x on road. I was always searching for the sweet spot in the gearing and either grinding or spinning.

I eventually sold it and went for a bike with more room for wider rubber, and I don’t notice the difference in not having the fork on gravel now that I’m on 43s instead of 37s. I do use a Lauf Smoothie handlebar though because I like the bends in the tops.

Lauf is a really great brand, with friendly and responsive staff, and a great user community.

Happy to answer any questions. 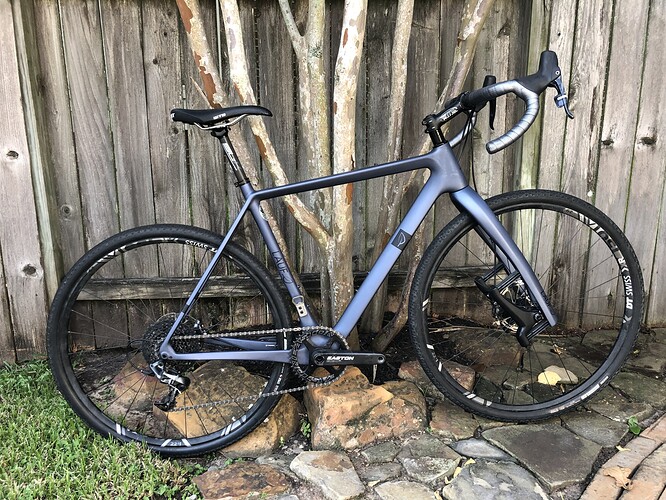 I eventually sold it and went for a bike with more room for wider rubber, and I don’t notice the difference in not having the fork on gravel now that I’m on 43s instead of 37s.

Lauf says the True Grit will take 45s, which means it may take larger depending on the tire/rim combo. Did you try anything larger than 37s? How did you like the ride of the frame?

I’m thinking about the Force AXS build and converting to 2x AXS Wide.

Unfortunately my XL size was in stock yesterday but now is “ships by 5/24” and the XL Ultimate is “not available”.

I did not try anything other than the stock Ramblers. I only mentioned that to say I think wider rubber makes more of a difference than the fork, and without the sway when climbing.

As for the frame, it was super light, which is awesome, but I don’t think you can really feel the frame on a bike with wide tires. It’s all about geometry for me.

The geo is what has me interested in the Anywhere too. I would put it to 2x AXS Wide though… I’m looking for something with the handling of a Caledonia (higher trail, lower BB, longer WB) but with room for fatter tires.

This is the same approach I’m thinking… and contemplating the 2x.

Bumping this up in case anyone has any more thoughts. I’m looking at the True Grit as a gravel race bike. I’ve heard the complaints about the wobble on tarmac, but I don’t plan on doing any epic road climbs on this bike, so it doesn’t concern me too much.

The frame and fork are very interesting, but the parts spec is kind of sealing the deal for me. As the OP said, $5k for Force/XO1 AXS, a quarq PM, and an ultra-lightweight wheelset from e13 almost seems like a joke. At this price I’ll probably pay the $400 up-charge to get the cool purple paint job. I guess you get a lot more when you don’t pay the $2000 tax to have trek/specialized printed on the top tube. As far as I can tell the closest Diverge model (same groupset, carbon wheels/bar) is the $7500 Pro Carbon, which does not have a powermeter.

Yeah, prices came down when they went consumer direct.

I looked at the Lauf’s when I started kicking around the idea of a new gravel bike, but the high BB put me off on them almost immediately.

A 65mm BB drop is really high…higher than the 70mm drop on the bike I wanted to replace because I didn’t like the high BB.

Love the fork and overall design of the bikes, however the BB made it a non-starter for me.

What is the downside of a higher BB (within reason)? Stability?

Yes, in a nutshell. Higher BB raises your center of gravity, so the bike is a little less stable.

The advantage of a higher BB is that you have more pedal clearance over stuff….but unless you are doing light MTB stuff on your gravel bike, I don’t think it is needed.

I ended up with the Aspero, which has a 76mm BB drop, over a CM lower than a Lauf. As soon as I got on the Aspero, the difference was noticeable vs. my previous Crux.

I ended up with the Aspero, which has a 76mm BB drop, over a CM lower than a Lauf. As soon as I got on the Aspero, the difference was noticeable vs. my previous Crux.

Oh yeah, good eyes, I had missed that BB drop measurement. Regardless of how it affects handling, it’s odd that the BB on the True Grit is higher than on the Crux (or my Boone, which I’m currently using for gravel) and so out of line with other gravel race bikes. Honestly it’s been so long since I’ve ridden a drop bar bike other than my Boone (outdoors that is) that I’m not really sure what I would notice/what I would look for on a bike with a lower BB.

Can I ask which fork setting you are using on your Aspero? In the 51mm fork setting, your aspero has basically the same trail as your crux (I used this trail calculator and normalized to 40mm tires), but in the 46mm fork setting you get 5mm more trail on the aspero. I’m wondering if that’s driving the stability improvements more than the lower BB.

With the slacker HTA (70.5 vs 72 degrees) and a 47mm fork, the True Grit has a lot more trail than the aspero/crux/boone.