Been using the Kickr Bike regularly for a few weeks now and the experience has been really good.

In TR, when I start an ERG workout the gearing is defaulting to 1 (front ring) and 3 (rear ring). Leaving it here has fixed any issues I had with ERG adapting to changes in intensity between intervals. Now it’s locking in to the new power with a few seconds when the intensity changes, similar to my Tacx Neo.

For now, I’m still using the Kickr Bike just on the floor (carpet mat) and haven’t put it on an MP1. I’m surprised just how comfortable it has been as I’m used to using a road bike/TacxNeo/Saris MP1 setup, but the Kickr Bike has been great. Being able to adjust the title is a very underrated feature in my opinion. Being able to move the bike a few degrees at various times throughout the workup does enough to change the pressure point to really help with comfort. The little bit of give the bike has also helps. As mentioned before, I did put a SQLabs 611 “active” saddle on it, which is a perfect fit for me, so that also helps.

I thought initially I would leave my road bike/Tacx Neo/MP1 set up in place and possibly alternate between the Kickr Bike and that set up, but I don’t see the need. The Kickr Bike seems to do everything just as well and more. The lack of drive train noise and the tilt feature are great bonuses. I will still try it on the MP1 at some point, but as of right now super happy with the purchase.

A couple months after I got my Kickr and got to doing 2hr and longer rides, I noticed I would get some numbness in the wrists. I eventually solved this issue by tilting the bike way up. I keep it at like 14 degrees or more. This pushes my weight back more and makes it easier on the wrists on really long rides. I can now go 5 hrs without any (serious) comfort issues.

I will still try it on the MP1 at some point, but as of right now super happy with the purchase.

You ever try this? Curious if you ended up leaving it on the floor or went the MP1 route.

Curious if you ended up leaving it on the floor or went the MP1 route.

Not yet. I’ve honestly been surprised how comfortable the Kickr Bike is just on the floor. During TR workouts, I’m changing the tilt pretty regularly during the rides and it really seems to help change up the pressure points.

As the weather gets colder here, I’ll probably get motivated to try it on the MP1 and will update when I do.

Hello, mates. Looking for some help and advice.

I am quite tall and heavy rider 184 cm and 90-95 kg. I live outside of Europe so quick replacement of parts from wahoo may be a problem. I was waiting for the second version kickr bike, hoping that wahoo would fix a some of production problems of the first version and increase durability. Have they taken a step in this direction? Does it make sense to buy v2 in terms of its greater long-term durability compared to the v1?

Have you read the existing topic on the new V2 Kickr Bike?

Wahoo muddied the waters by releasing the new trainer and bike on the same day, with coupled press release, but I started a unique topic for each device. Per that, the link above covers what Wahoo claim to have changed / improved on the new unit. Maybe some of those relate to the “production problems” you mention?

Generally speaking, I am not sure many people have received these new V2 units yet, or at least not shared much feedback that I have seen. The V2 thread linked above is where that discussion will be found once it arrives. This current topic is essentially set for the V1 and I will update the title accordingly for clarity.

I think there is no difference. GP Lama post on New Wahoo Kickr Bike V2 2022 - #33 by GPLama
It shows that there is very minor different. So I think the cheaper V1 is a better option compared with v2. Since for the durability they are probably the same, you still need to rely on your warranty.

@FatGuyTryToBeSlim V2 has Wi-Fi Dircon which could be a consideration for some.

Good question. I would have to assume that they stopped production on the V1 months ago, so it really depends on how much stock they have to clear out.

I am tempted too. Currently have a Saris H3 which I got on their super clearance. I am enjoying the trainer when I can’t ride outside… but with a trainer that works, I am curious how much better this is and if it justifies the purchase.

Going to need to decide real quick as I won’t buy one at 4k.

If it is within your budget, I’d get it at the current price because at some point it’s going to disappear. I’m not sure if it is still going, but there was an REI deal on it as well that avoided the shipping cost if you could pick it up.

I also considered waiting for the next price drop. I think it was about $400, maybe $500 between price drops and I think the first price drop was about 2 months ago. I would think they would wait as long for the third price drop and it would be somewhere around the same amount. So my thinking was, I have to wait until maybe January and with Christmas around the corner a decent likelihood they would sell out between now and then, so I said, for $400, let me just secure it now and be content.

Thanks for these replies. I pulled the trigger and cant wait to start using it. I tried REI to avoid shipping costs as recommended but sadly they were sold out so I ordered direct from Wahoo.
Did anyone do the extended warranty?

Interestingly, I just checked and the V1 bike is back up to $2999. So, I’m glad I bought it at $2279 on 11/8. However, interestingly, it hasn’t shipped yet. I’m assuming that because of the white glove shipping that it doesn’t fall into their 1-2 shipping promise for in stock items, but I guess we will see.

Well, just went through and added gritty grease to the seatpost and steerer. My seatpost was pretty well dialed in (as in, not moving), but my bars would drop about 2cm a month. Too slow to notice but after a while I’d feel “stretched out”.

I also raised the standover height as I didn’t like how much seatpost was exposed. Though there aren’t any measurements, it’s about 2cm per letter.

I also picked one up at the lower price so I’m happy with that. I got an email that mine has shipped and the shipping company will call me for delivery. It’s been over a week since I got that email, but still no call about delivery.

This shipped last night from a warehouse about 4 hours from my house. Hoping to see it tomorrow.

Looking for a little advise on fit. I just picked on up cheap.

I tried the photo process and it seemed to get it kinda wrong. I then tried my retul fit measurement but these didn’t seem to work either though this could be as i have a 20mm setback post on the bike the fit was on.

Any advise what measurement to take from my current bike to make the kickr feel the same?

Also in some gear when you change and lower cadence i get a kinda low whine breifly, is this normal?

Here is a good option that covers most of the bases. Get the measurements from your bike of preference, them match them on the Kickr Bike. 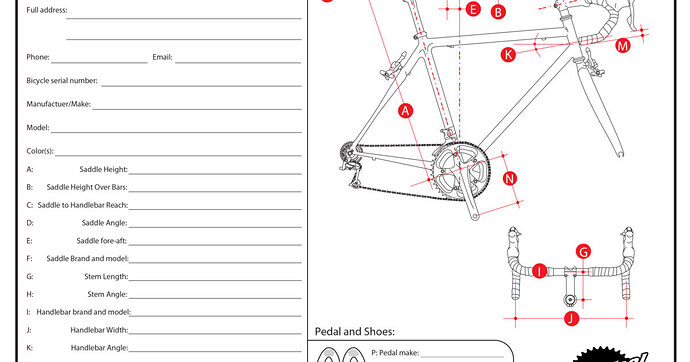 This article describes the use of a Road Positioning Chart for rider fitment on competitive road bicycles.

And here is what I made for my own use over the years: 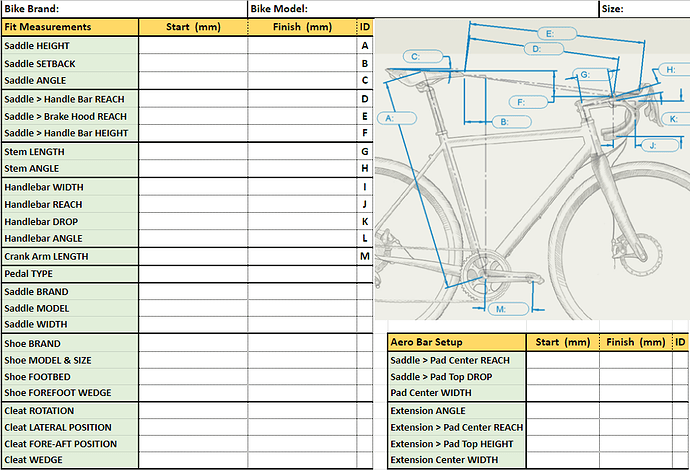