Soaked . Bloody HR still having a drop out now and again, but it doesn’t drop out from my Garmin. Anybody any ideas? 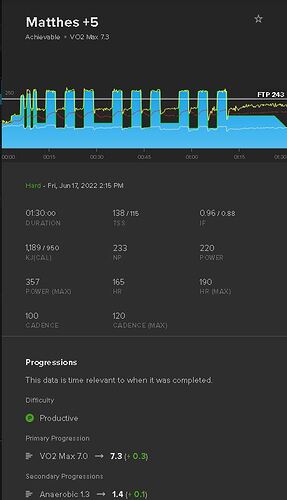 If the Garmin is still reading the HRM fine and TR isn’t it suggests that something is blocking the signal. With my ant+ power meter sometimes I have to turn off the garmin and let TR pick it up before using the Garmin again.

My HR monitor is a Polar H10, which i think is Ant+ and has two BT channels. My PM is Ant+. I have a BT Dongle and an Ant+ dongle.

I’m not sure how to make sure none of the devices are channel sharing etc, or would TR keep everything on separate channels automatically?

My TickR is like that. It usually connects fastest on Ant+ rather than BT. I think when I have the Ant+ PM and the garmin and wifi it can just be ant+ overload for TR. I am not sure how TR works but I’ve found myself in the past having to turn off the garmin until TR has found everthing, most times its not a problem though.

I recently had to switch to PowerMatch using Bluetooth and have noticed many more dropouts than over Ant+ to Zwift and my Garmin head unit. The head unit is obviously closest to the HRM and power meter, but I also have an Ant+ dongle for the computer connected via a shielded USB cable, whereas the computer is using its built-in Bluetooth, so furthest away.

I’m not sure what I’ve changed, everything worked flawlessly for months.

have Baird +4 ( VO2 6.8 as a stretch) tomorrow. We’ll see if that gets pushed to Friday cause my quads and hammies are protesting today’s effort. With gasoline in my area at $6 US, I’ll commute Friday either way, out of pure smugness, so I might look for a mid-6 VO2 that’s only an hour rather than 75 minutes if I do push it.

Brewpub ride already on the calendar for Sunday.

Fridays are generally bad day for workouts for me, so instead of looking for an easier alternative on Friday, I looked for one on Thursday. 90/60s seemed like it was going to be a bridge too far for me, so I settled down to Acrodectes -1, (VO2, 5.8, productive, 60/60s). And I pretty much knocked it out of the park. I added 3:30 of Z2/low3 and then did a full 5 minute cooldown. TSS was higher than Baird +4 target would have been and I exceeded the targets on most reps, usually by a not small margin.

I marked it hard because it was. Only in the last set when I was trying to maintain a vanity power number above the workout target’s, did I actually think I might have to mark it all out.

I’m glad I alternated down, though, as 90/60s would have been a real stretch. I think with my smaller increase in FTP, AT made an aggressive call for the workout to be a whole 2 PL higher, but it wasn’t long ago I was pretty doubtful that it was making too conservative adjustments after large FTP increases.

Coached a soccer game, got home after 9 and managed to get four sets of squats, kept it light, but I haven’t been lifting well, so, yea…. DOMS expected.

Friday just a commute to and fro, and an early start. Actually had a less range of motion and lifting DOMS than expected, but maybe that’s because I wasn’t quite as focused on range of motion during Thursday’s squats.

Saturday - woke up with the DOMS I was expecting, coached a 9 am soccer game, chauffeured a bunch more. Got home after 5pm and totally flaked on a workout. 0 saddle time/0 Training Stress

Sunday - brewpub ride with friends. 23 miles, 4 beers, some cheese curds. Speed limit sign sprints (2). No other efforts. Good company. Tinge of regret when one of the friends admitted that he got his workout in during the morning…. Oh well, sh/t happens. 100 minutes. 48TSS.

In-office week:
Monday commute to and fro, and wife’s birthday, so the weekend’s threshold workout (St. Elias, 4.1, 90 minute, Productive) got canceled after being pushed from the weekend (tinge of regret). 49.5 minutes, 36 TSS.

Tuesday commute to and fro, but really early on the return, since we had internet, power and sprinkler issues at the office. Rode home and jumped into Wolfjaw +1, (vo2 6.8, stretch, 75 minutes) 132 minutes total, 124 TSS.

Wednesday office is still closed so I considered trying to pack a threshold day in to make up for St. Elias, or an endurance 90-120 minutes, but work (even telework) didn’t allow it.

Thursday - late AM commute. Like 10am rather than 6am. About halfway there I picked up a tail. Total cat6 dingle-berry. He was impressed with my acceleration out of lights; when he managed to catch up he wanted to chat, but I did need to get to work. He followed me on city streets for about three miles, usually only catching me at longer lights. Funny part was during one of these awkward conversations, I realized he was on a home-job e-moped bike-shaped object. I’ve never been a carrot for a moped before, but it was mildly amusing.

Commuted home late, too busy to eat lunch, but took advantage of a tailwind and took a crack at a strava segment (flat, only one light in about 1.25 miles) and thought I’d have parenting to do so was ready to bail on the VO2 workout, but my kids were around the corner at the park. I took the scheduled 6.8, 75 minute, productive (title forgotten once I hit “replace”) and found a 45 minute achievable 5.8 in Bird -2. Glad I reduced time and level, but I still feel like I accomplished something. Marked it Very hard, because for once I wasn’t exceeding the target avg power as displayed on the screen, but upon review, I was pretty close for most of them. Still felt very hard. No lunch might have something to do with that, right? 84 total minutes, 112 TSS.

Friday 0420 start leads to fastest commute ever, but that’s from being confident about traffic conditions in my major metro area. Commute home was long-way. 72 total minutes, 48TSS.

Tomorrow I have Remmel (thresh 4.2, 90 minutes, productive) but the wife has plans for a family ride on a creekside path, for Father’s Day. I might get it in, might not.

You didn’t want to skip a rest interval

(once you get past the name, it wasn’t so bad) 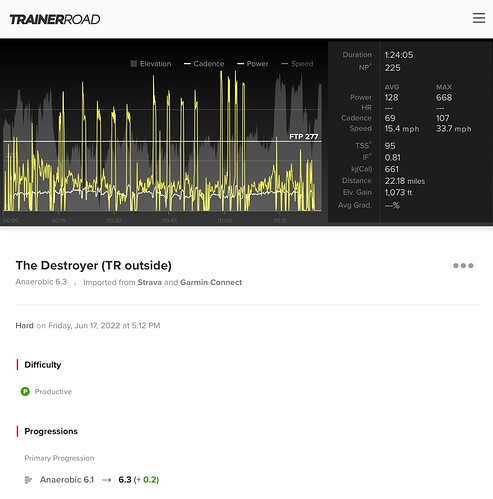 Feeling quite strong today for some reason, strange as I had quite a lot of beer last night.

Started TR before loading up my Garmin, a lot less drop outs of the HR monitor, but still one or two, but I can live with that. 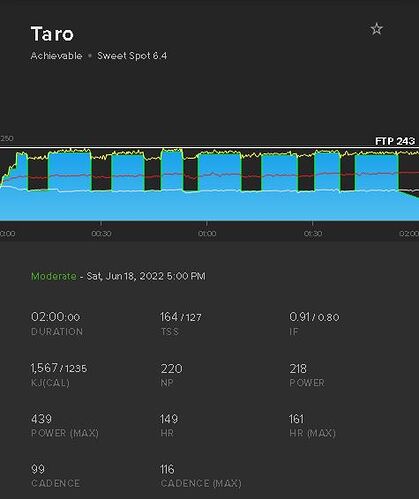 Two straight hours of SS? how about a recovery interval at least once in there!

@kjdhawkhill there was a warm up at the beginning

Did some extended solo endurance outside today 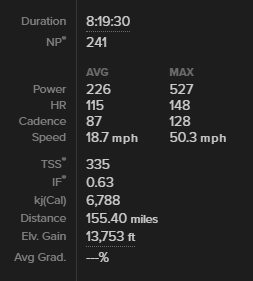 This is solid!! Maybe time for an FTP increase?

I don’t think you’ll find anything to associate it with, but you know you’ve done it and what you are capable of.

Maybe and probably… I have AI FTP coming on Wednesday, but I’m in no rush to increase it. … be interesting to see though.

At current setting and by lifting up the recoveries on my workouts I’m making my hard’s hard/very hard, and my easy days are easy/really easy. It is also what my Garmin has my FTP detected as.

Also, I’m not following a plan, but I think I’m progressing at a rate that isn’t killing me

First-hour fasted outside on my single speed… 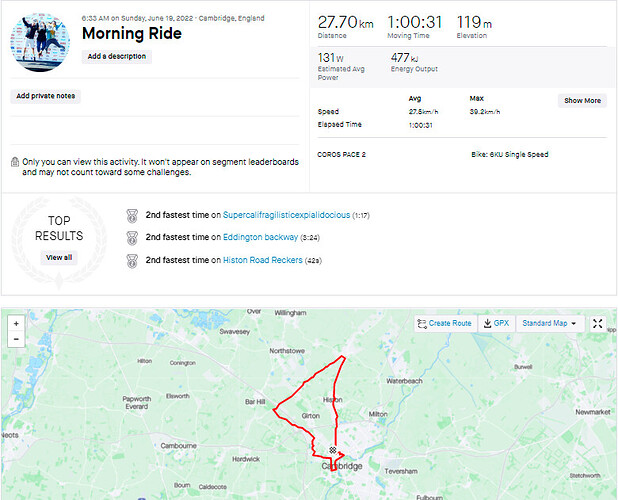 Then straight into Baxter+2 fuelled with ~ 120g CHO

I had four hours of endurance scheduled but with not quite enough time for that I decided to opt for something a little shorter but more intense… around equivalent?