Wahoo is suing Zwift as it claims that Zwift’s own Zwift Hub Smart Trainer is a blatant violation of Wahoo’s intellectual property as it is similar if not a copy of the KICKR CORE.

Looks like Wahoo is not liking it when Zwift launched its own smart trainer to reach a wider consumer base and in the process drive down the price of high-end trainers. From a consumer perspective, I like to see lower prices as this sport is very enjoyable and decent indoor training shouldn’t remain elitist due to the high entry fee of purchasing a direct drive smart trainer. I have noticed that the price of the KICKR power trainer has been down by 28% for a while at my local bike shop. 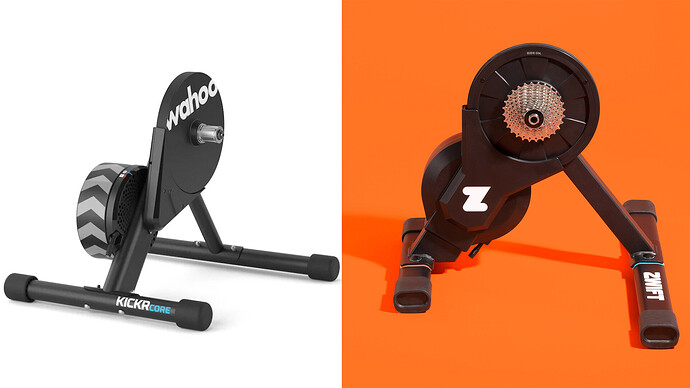 Wahoo believes that Zwift's first smart trainer is a "blatant and clear" violation of its patents. 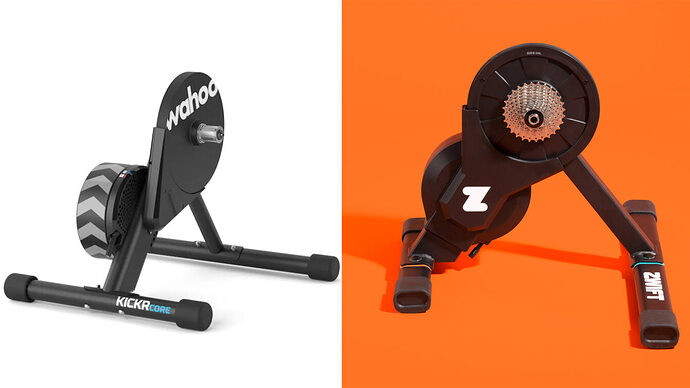 Wahoo is suing Zwift as it claims that Zwift’s own Zwift Hub Smart Trainer is a blatant violation of Wahoo’s intellectual property as it is similar if not a copy of the KICKR CORE.

Gotta admit when I saw the first images of the Zwift trainer, my initial reaction was “oh, a Core knock-off”. (I was unaware of the previous JB trainer).

But I don’t think they have much merit to stand on, especially if they never went after JB (not that it is a requirement)

Is this about the superficial similarity of the overall layout, which I assume they did not actually patent, or did they actually copy the guts of the trainer itself? In that case, the Hub would probably also infringe on the non-Core Kickr.

Imagine if Zwift decided to remove Kickr support to spite Wahoo. It would turn into a total…colorful phrasing redacted.

Post-publish edit: None of the patents are about the legs. The figures all show the vanilla Kickr, not the Core.

Never happen….Zwift would lose a massive chunk of their subscriber base

Given that trainer control is a standard, Zwift would have to add code specifically to block Wahoo trainers. Doing this would get ugly really quickly

Looks like three utility patents; if they’d patented the layout it would be a design patent. The 10046222 patent is really broad and seems to cover any trainer that can control power with a magnetic brake. 10933290 is similarly broad but covers more the physical construction than the control. 11090542 seems to be slightly less broad

The part of their statement that stands out to be is “at deeply discounted prices”. I think they are just scrambling to deal with Zwift creating a huge price gap, it makes the Core very unattractive.

Isn’t the Core just a Kickr V4 with a slightly lower power/gradient rating and nominal accuracy and a minimalist base?

I would say my only complaint about the Core is that they won’t sell me a replacement belt and the rubber feet keep working themselves off the legs. Also, it doesn’t have a carry handle.

They should be suing literally everyone who makes a smart trainer, then…

The problem with the line of thinking in the Wahoo internal e-mail that CyclingTips quoted:

"simply a copycat product of Wahoo’s KICKR CORE trainer … we would not have taken this action if we did not believe the patent violations were blatant and clear.”

Is that someone at Wahoo seems to have forgotten that their own KICKR CORE, was arguably then a rip-off of the Magene Gravat 2 trainer, which came out over a YEAR before the Wahoo KICKR CORE was announced (Gravat 2 in May 2017, the KICKR CORE in July 2018).

Now, Wahoo could further argue that the Gravat 2 was then a rip-off of the body of the Wahoo KICKR…that’s slightly more viable. But of course the patents don’t have anything to do with the KICKR CORE. The have to do with rather broad stuff from a decade ago.

Eh? It is well known that the Zwift hub is actually a Jetblack Volt. That’s been on the market for a few years. Why did Wahoo not sue Jetblack, if they think it’s an infringement?

“ThE ameRICAN wAy”. What a joke.

Jetblack Volt didn’t have shoulders to be noticed by Wahoo. But Zwift has mush stronger market position which disturbs Wahoo.

It does have a very ‘kid throwing toys out of the cot’ feel to it. They obviously knew Zwift and TrainerRoad were in a scary position (for them) when they decided to do the whole Wahoo Systm thing. It’s just business and they let themselves get in a vulnerable position.

Imagine if Zwift decided to remove Kickr support to spite Wahoo. It would turn into a total…colorful phrasing redacted.

If Zwift removed Kickr support, most Kickr users would just move straight to Wahoo RGT… then realise RGT was better than Zwift all along. With all the extra riders it’d give RGT the social vibe it needs. Zwift RIP.

Eh? It is well known that the Zwift hub is actually a Jetblack Volt.

Yea, couldn’t Zwift just be like, “Um, you guys know we didn’t make this trainer right? We just put our stickers on it.”

Thanks, I didn’t look into it to that detail, hah.

Readig that, the crucial point might be “to stop selling those trainers in the US”. Maybe before, Jetblack’s market share in the US were to small to be worth chasing.

Given that they charge for delivery, it even looks like a drop shipping setup to me.