Plan Builder is now available on our desktop beta apps! It has the same functionality as it does on the website. You can build a custom plan that leads you to your goal event or you can edit an existing custom plan that you’ve already made.

This has been released to our beta applications, which you can download here. Please feel free to drop any issues you run into in this thread!

For a detailed overview of Plan Builder, go here. 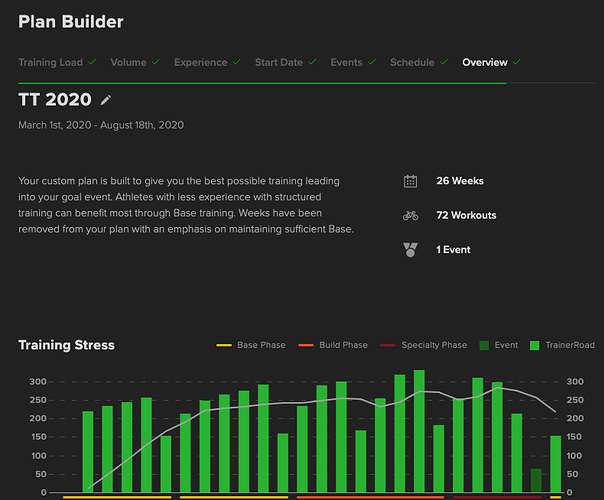 Ok, just took a shot at the Desktop App PB and pretty impressed, although I noticed an issue that existed in prior iterations of PB. I set the start date as last week (3/16) but PB then defaulted to today (3/22) as the start date. I opened the plan back up to make sure it was still set to 3/16 as the start date and it was. So apparently the start date in the past function is not working in the desktop app PB. @bnied, is this intentional to test base functionality or is backdating supposed to work at this point?

For reference, I am using the Microsoft Desktop app on Windows 10 (all up to date and running the most recent version).

Other than this issue PB beta functions beautifully so far and has the same smooth feel as running it through the website. Going to try the Mac beta next for comparison.

UPDATE: So after looking a little closer I see that backdating DID technically work. What happened is PB simply cut off the first week of the plan, set the block 1 annotation at today, and then started with week 2 workouts tomorrow (3/23). Week 1 does not show up in the calendar. 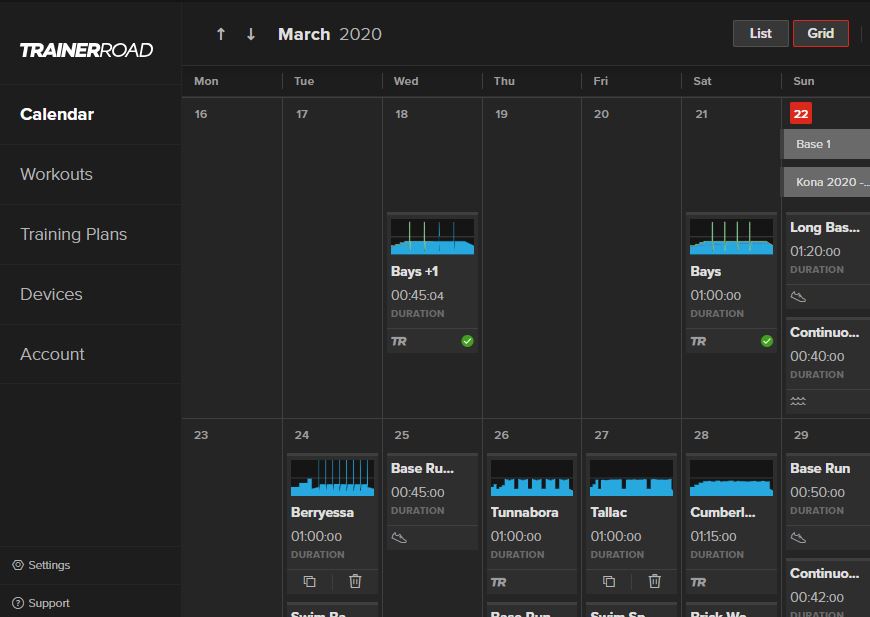 This is only for the desktop app, not mobile.

This is only for the desktop app, not mobile

Round 2 of my PB testing is complete. Here are my takeaways so far:

WINDOWS:
The desktop app runs pretty slow, which I get is expected for a beta, so no problem there. One issue is that the app goes to the pair devices screen on startup every time, meaning I have to re-pair each time I open the app, as well as wait for the workout library to re-sync each time. So this causes quite a bit of delay on startup to get things rolling.

Another issue is with doing a workout. I completed my first workout this afternoon using the beta app and my trainer cut out with 13 minutes left. Wouldn’t re-pair so I just ended the workout and called it a day. Caveat is I am not sure if this is still a Windows native bluetooth issue or actually related to a bug in the beta. I will also note that since the latest Windows update my Wi-Fi connection has been randomly dropping out for no reason while my Macbook remains connected no problem. This leads me to think the connection issue may be Windows related rather than PB beta related, but I’m not sure.

MAC:
Holy smokes this thing is slick for a beta! None of the issues I’ve experienced with the Windows app, so far. Have not tried a workout through the beta yet since I used the Windows beta for that today but will post an update tomorrow once I have. Initial startup was super smooth and loading surprisingly fast. Pairing devices was quick and when I rebooted to reopen I did not need to re-pair my devices, which was nice. So the app just went straight to the calendar unlike with Windows beta. Did not need to re-sync workout library either.

Next I deleted the PB plan I created with the Windows beta and started from scratch again with the same plan setup. Worked fantastic. Brought in my events already on calendar no problem. Backdating to 3/16 worked as well although just like with the Windows beta it set the plan annotation on today (3/22) and started with week 2 workouts tomorrow (3/23) but did not display the week 1 workouts. I assume this is just how backdating is supposed to work?
Here is a screen grab: 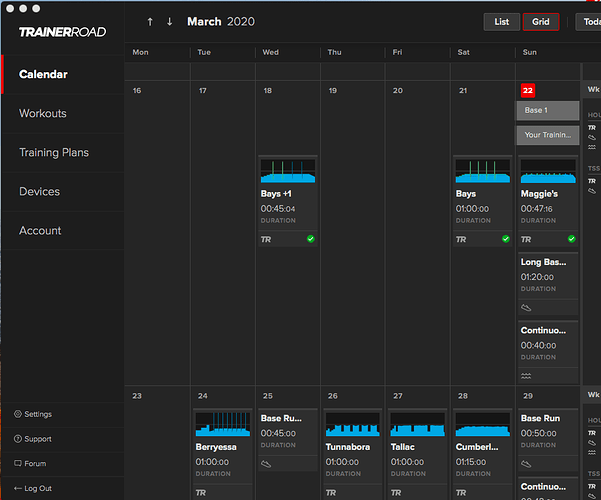 An issue with the Mac beta I discovered, no openers for A & B events where events are already on calendar. Plan is Full Distance Tri - Mid Vol for reference. Here’s a screen grab: 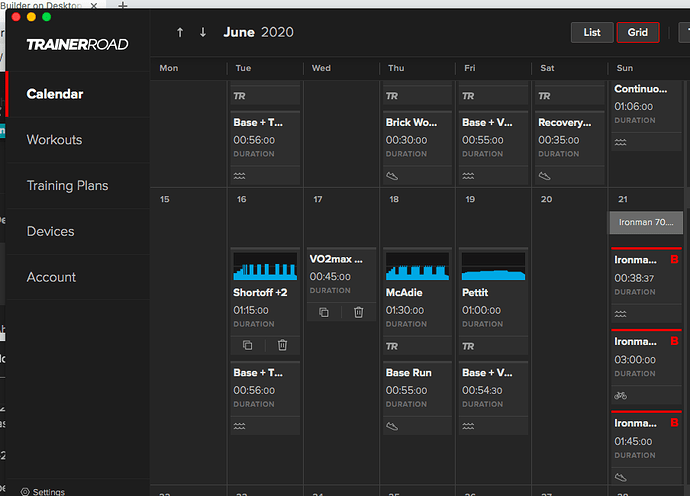 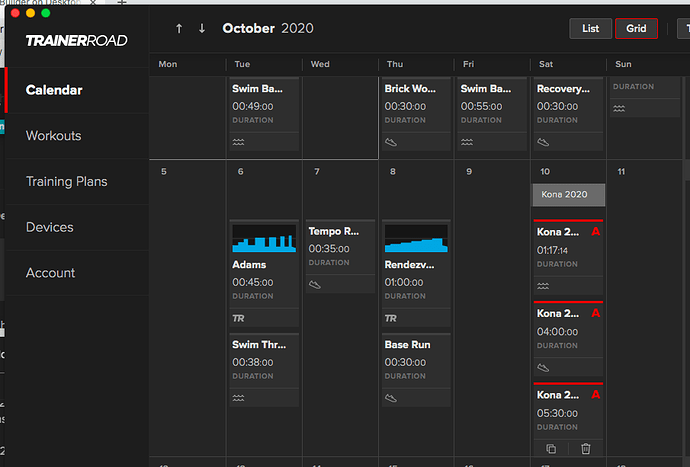 Deleted this plan and started again from scratch, this time not including already calendared events and adding whole new events to see if this would get the openers to add. It did not: 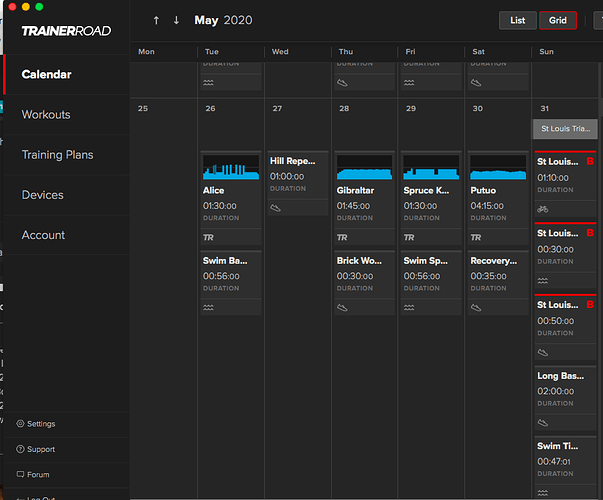 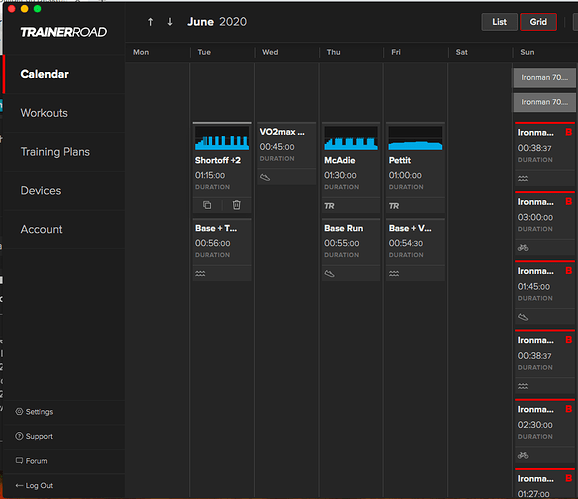 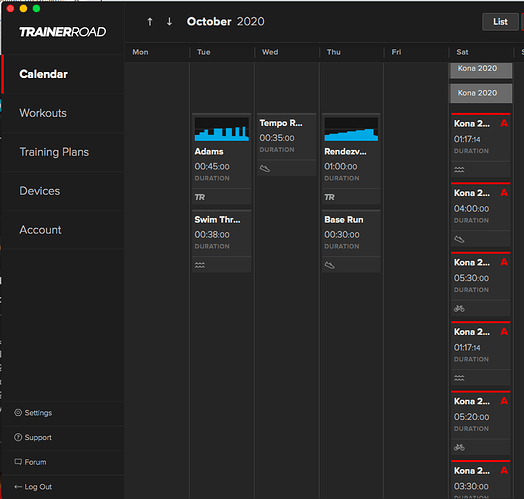 TAKEAWAYS:
So far a solid first iteration. Much more impressed with the Mac beta at this point, but not sure how much of that is attributable to Windows issues rather than PB beta issues.

UPDATE (3/24):
Completed a workout using the Mac beta and everything went smoothly. No bluetooth dropouts or other issues. Really impressed with the Mac beta so far, just need my openers to be there for the tri plan.

I also tried out the 40k TT plan to see what it would create, entered my event, and set PB to include openers. Cajon was included as an opener the day before my time trial so it appears the opener issue is not across the board. I have only tried the full distance tri plan - mid volume (no openers) and 40k TT plan - mid volume (openers were added).

So I ran through PB with all of the tri plans and it appears that is the issue. After testing Sprint, Olympic, and Half distance plans as well, none of them included openers before the event. The Off Road event used the Olympic plan so no openers there either.

Just completed my first Group Workout using the PB Beta on MacOS for everything and worked flawlessly. Audio run through microphone/speakers, that and video were fantastic with minimal lag.