Music During Training, Eating in a Fast Race, Carb Loading and More – Ask a Cycling Coach 244

I’ve got a question about plan builder

Because my IM plan was slightly longer than the prescribed base, build speciality mine goes base, build, base, specialty

no issue with this BUT

the long runs in this second base max out at 1 hour, suddenly when I get back to specialty I am back up to 2.40 long runs, this doesn’t seem like a good idea to suddenly have such a massive jump in run volume, should I just keep up my slow long runs in second base?

Is chad drinking beer at 8am???

I really like my Bose SoundSports while on the trainer they block most of the wind noise from the fan. If I’m rolling solo on the road I put one wired white apple headphone in.

I have a set of bone conduction head sets. They’re great. In the gym or on the trainer I use a set of ear plugs so I have noise cancellation . Outside you can still hear the music but can still hear what’s going on around you.

My favourite noise cancelling earphones are JBL Under Armour Flash In Ear Headphones.

They deaden the sound brilliantly. You can press the button and then there’s ‘talk-thru’ so you can hear, if you need to, without taking them out.

Here is a commonly referenced example of the Accuracy / Precision discussion: 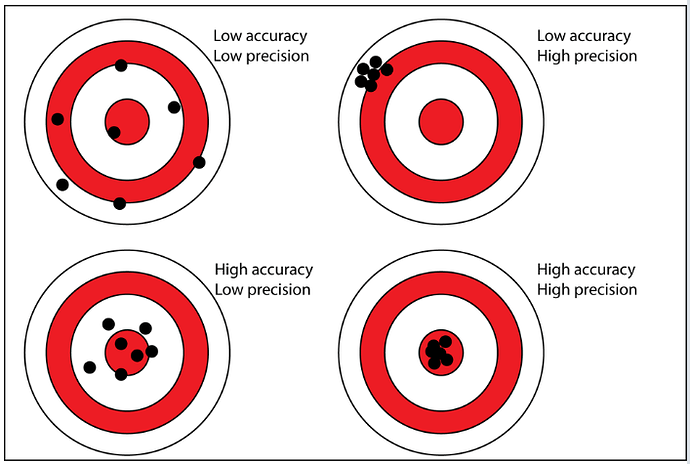 One large difference between road/tri/gravel vs single track is bumps & turns.
On my road bike or TT, there’s not much bumping & twisting turning around: i can grab a bar , unwrap it and eat it even while staying aero. I can do that quite safely while steering with one hand and then dispose of the wrapper.

You are correct there. I definitely look for places I can eat and drink at while I pre ride an xc course. I personally do just a bottle of sustain elite (25g carb drink) if it’s around an hour race, and I add one clif gel at the 45 min mark if it’s going to be an hour and a half or more. I can’t speak to marathoners. Longest race I’ve done was 40 miles and I just did gels every 45 mins. I have the top of the gel pre ripped just a little bit, then duct tape it to my top tube so when i grab the gel, it autimatically rips the top all the way open and it’s ready to consume.

So I can keep listening to Grateful Dead. Also I like Aftershockz ( www.aftershokz.com/) headphones when eiding outside, they leave your ears open

USAC upgrade points: when you cat up does your points count restart? And is the new scheme retroactive (like do I have to go back and recalculate results from previous season), or is it only for results moving forward?

I dislike hydration packs so much, (comfort thing, not vanity) that I quickly learned how to drink from a bottle even during trickier sections. I usually use gels and carry plain water, although I might try TailWind this year for racing. I’ll also use my new USWE for events where a bottle doesn’t cut it. For those I’ll carry water in the pack and a mix in a bottle.

Has anyone tried carrying one bottle and a small water filter? I’ve done it on hot summer rides, just to avoid the pack!

I have to say this was the most enjoyable TR Podcast for me to date. Original cast, day drinking, MTB content, lots of lols. Thanks y’all- big fan here!

Are the XC marathoners just use liquid fuel?

I’ve done Leadville twice on bottles only. 1 bottle of Infinit Nutrition per hour and that’s it.

ok which one of you is the other music major

So much fun to watch the podcast video.

3:44 minutes in when Jonathan tells Chad there was “zero distance” Chad looks at Nate and nods with this look of pride…

Skratch is designed for hydration, not fueling.

I kinda get where @chad is coming from regarding strength of beers. 6% normally a decent sweet spot for me, with a preference for extra (rather than imperial) stouts. The problem I have is that I don’t have just 1, and end up drinking even imperials way to fast and too many! So I generally end up having 4 or 5 lower percentage beers, or picking styles that aren’t normally strong (Red Ales, ordinary Stouts).

Anyway, I’ve found BrewDog “Nanny State” to be a decent under 0.5% option. Certainly stacks up against 4% “Session” IPA’s. Wicklow Wolf “Moonlight” is similar, and uses added lactose for creaminess.

As an aside, here in Ireland Erdinger Alkoholfrei actually markets it’s isotonic properties. Not really a fan of wheat beers, but it’s better than any of the lager options!

It contains only 2 carbohydrate sources which means it COULD cause gut irratation for some people and the energy is also not as long lasting as a drink that has 3-5 sources of carbs. It also only has 25g of carbs in a 16oz bottle where as the others have 30-80.

I wouldn’t say tailwind is a bad product, they at least don’t use maltodextrin which is great, but there are just other products that are better