I asked if there was one that mixed better. Not how to mix this one.

Regardless of the name, it’s maltodextrin. They all mix the same.

Maltodextrin is somewhat difficult to mix because it is such a fine powder. I fill my water bottle half way with warm water, add my ingredients (malto, fructose, electrolyte, and BCAAs), shake vigorously, then top off with cold water a few ice cubes.

There are other sources of carbs that may mix easier such as dextrose but you need to consider different transport mechanisms if you’re trying to hit 90+ g/hour.

The articles below may help your search.

The 4 Key Misconceptions About Sugars and Endurance

I have the same one, it definitely mixes better in warmer weather/water. I suspect any type of malto is going to have the same problem though.

my vitamix makes for a VERY expensive maltodextrin mixer. I put the water in, turn on low setting so there is a small vortex and mix in powder. It does a good job but its complete overkill.

I use a blender ball in my bike bottles for my corn starch. It’s a little rattly when the bottle is empty, but it seems to help get things mixed better.

I know there are several fuel threads now, and I’m pretty sure this has been covered, but I can’t seem to find it…

I totally get the 2:1 ratio for Malto:Fructose if you’re trying to maximize fueling. But I thought I read at one point that replacing the Malto portion with 50:50 mix of Malto:Dextrose has some advantages as well. Something to do with differing rates of metabolizing them? Aside from the taste/sweetness, are there pros cons to using a 50:50 Malto Dextrose blend in place of the Malto? (So in theory you could end up with 1:1:1 Malto:Dextrose:Fructose?)

They are both glucose molecules though at the end of the day so what are you hoping to achieve by this?

Well that’s my question. I thought I had read that there are benefits to a 50-50 mix of Malto and Dextrose, but wanted to understand what those benefits could be.

from what I understand, and i am not an expert on this by any means just through my own reading, the difference is the speed at which your body can absorb the two.
dextrose is a single sugar (glucose molecule) while maltodextrin is a compound of multiple glucose molecules. Because dextrose is a single sugar the body can break it down and absorb quicker than maltodextrin. The issue though is you get the insulin spike this with that is somewhat tempered with maltodextrin.

That’s where my knowledge basically ends.

From Wikipedia: Maltodextrin is typically composed of a mixture of chains that vary from three to 17 glucose units long.

I’ve emailed the shop where I got my maltodextrin to see if they can tell me the DE of what I purchased. This would be one data point as a start.

I read it on the Internet so it must be true … Searching “maltodextrin vs dextrose vs fructose” turned up a wealth of information.

A good description of basic types of sugars we could use in our self-made mixes.

Looking for some on the go nutrition for your next run? Take a look at some of the products available at any Big Peach Running Co. location.

I like infographics that are easy to understand. The articles are good, too. 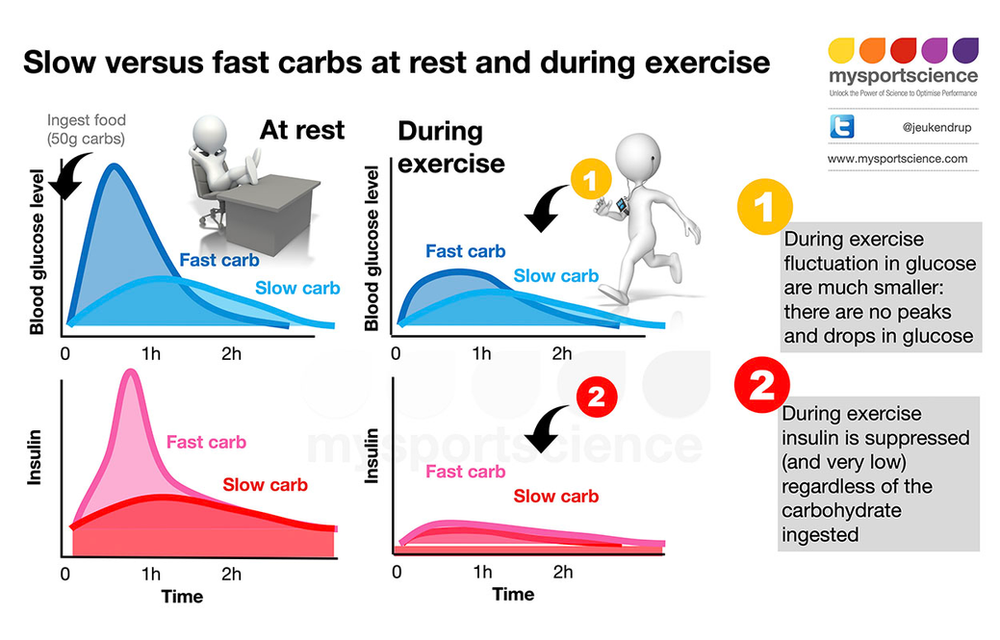 Do slow carbs live up to the hype?

Slow carbs are in fashion. There are slow carb diets, slow carb sports nutrition products, and just slow carbs. But do they live up to the hype? In this blog we will first look at the theory and then at the evidence. The spoiler: it doesn’t live up... 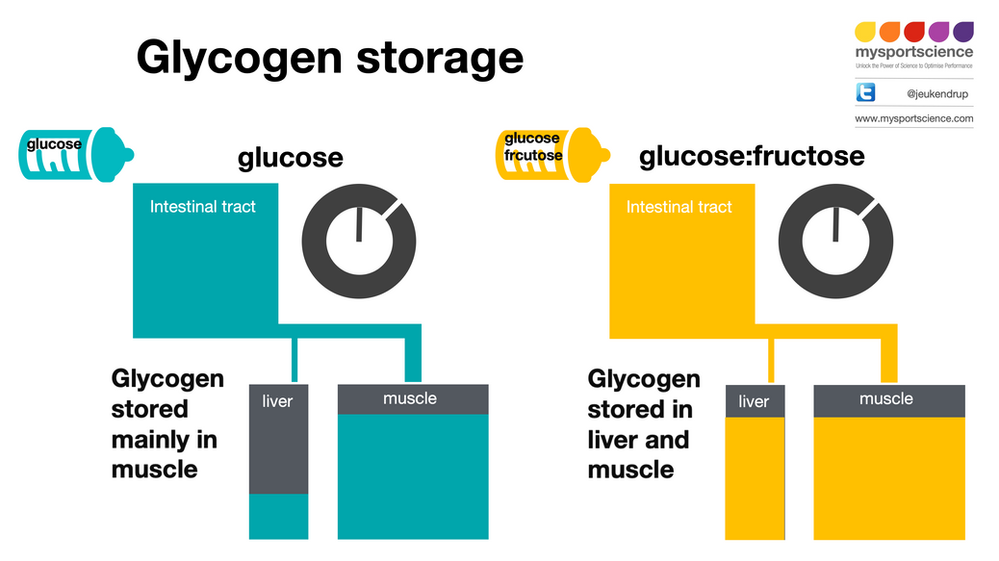 Maintaining carbohydrate availability is a key challenge in multi-stage races. Different combinations of carbohydrates may provide a benefit. 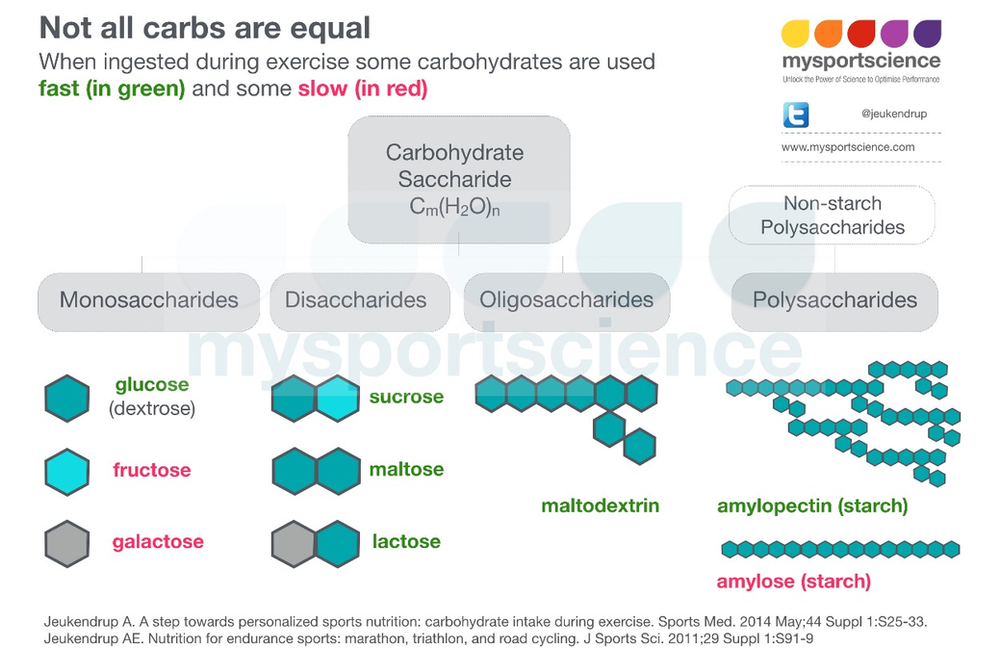 Not all carbs are equal

This blog explores which carbohydrates are used more quickly than others.

Now I’ll profess to not having read the above links that @rkoswald has posted, but my understanding of why dextrose can be beneficial in a mix over just malto is to do with osmolality. I’m not a chemist, nor a nutritional expert in any way, but from what I’ve read this is my understanding.

A common misconception is that malto is used in lieu of dextrose because it is slower release, but this isn’t the case. It is used as it has a lower osmolality.

So what does that mean and what’s the benefit?

If you put 60g of dextrose in 500ml of water the osmolality is 666mOsm/kg. Because it’s twice as concentrated (hypertonic) as the osmolality of the stomach it massively slows gastric emptying. The body has to work hard to throw water at it to dilute the content of the stomach before passing it on to the duodenum (the next stage and where carb absorption occurs).

Conversely, 60g of malto in 500ml of water, assuming a ‘dextrose equivalent’ of 12, would have an osmolality of 86 mOsm/kg. This is now hypotonic. I don’t believe this slows gastric emptying but I think the osmotic pressure will draw minerals from the body into the fluid increasing its osmolality at this stage.

So by balancing the correct amount of malto, dextrose, fructose and electrolyte we’re trying to hit an isotonic osmolality to speed up gastric emptying and get as much of the drink into the duodenum and start the absorption of carbohydrates into the blood.

I’ve not checked any of the recipes above, and clearly they’ve worked for those who’ve been using them, but I haven’t seen anyone checking to see if the osmolality stacks up. They may well not be causing GI issues, but that doesn’t mean they’re optimal.

This is where I’m interested and intrigued by Maurten/Beta Fuel. Perhaps it’s clever marketing, but everyone’s been making 2:1 for a long time. What’s special about these two? Are they just using a low DE (lower the number the lower the osmolality for the same grams of carbs) maltodextrin to get the high volume of carbs past the stomach and into the gut quickly? But at this point it’s then just a cluster bomb of glucose waiting to go off. Amylase rapidly slices up the matlo in the gut, osmolality flies up and you’re back to the same problem???

I dunno, but I’m convinced they’re doing something else with it…

Well and to add to the mess, what happens when you use clusterdextrin rather than malto or just dextrose?

I tired 60g malto / 30g fructose / nuun tablet for electrolytes and felt it worked very well over the last couple of weeks. Much cheaper than the Maurten 320 I was using before and could tolerate 1 bottle an hour just as well.

I weigh out 4 bottles worth of the malto and fructose into a 1 liter glass jar and then top up with water from the kettle until I had 1000g of concentrated mix. A little shaky-shake and everything dissolves well and I can store it in the fridge for a week. When it comes time to ride, easy to weigh out 250g into the bike bottle, top off with cold water and drop in a nuun tablet. 2 liters of concentrate will last me the week. It starts clear but turns cloudy after a couple of days, not sure that matters.

Flavor-wise, sweeter than I prefer, but good enough. The nuun citrus fruit flavor tastes like orange creamsicle, in a good way.

But at this point it’s then just a cluster bomb of glucose waiting to go off.

Beta fuel is an energy drink. It’s not a hydration drink. You are correct with your analysis. If you want to have good hydration with beta fuel, you’ll need to also drink an appropriate amount of water along with your bottle of beta fuel.

In the couple of centuries (5+ hours) I’ve done using a custom mix from Infinit Nutrition with an osmolarity at 277, I definitely craved pure water by the end of the ride. I imagine it would be the same with the homemade mix above, especially if it is (slightly) hypertonic. I haven’t had any issues (GI, dehydration, etc) for even my longest training rides (max 2.5 hours so far) but I always have at least one bottle of pure water in addition to mix.

That’s a great spreadsheet. Thanks for the link!

Up until this year I’ve mainly used skratch hydration drink, favoring hydration over fueling. I would still do rides pushing close to 400cal per hour, but would match with the appropriate amount of water to keep osmolarity in the intestines in check.

This year I’ve started experimenting with the beta fuel type energy drinks. For testing purposes just using the energy drink as specified (which ignores hydration to a point). I did an 8hr ride drinking 1 23oz bottle of flow formula drink mix (similar to beta fuel) per hour. Everything was fine until about hour 4. I started noticing stomach cramping. I’ve pushed 400 cals per hour many times before without issue, so I knew what the problem was. Next water source I downed 2 bottles of water and cramping went away. Below is the spreadsheet for what I was taking:

If its so cheap to make how much we don’t see more companies making these high carb drinks? You’d think if someone came in with the same same product for the same price as a normal drink it would sell a ton.

Thanks @cwiggum, that’s a good way of looking at it, the differentiation of hydration vs energy.