We are very similar. All I can add is that regardless of my own perception that I am faster standing (which is true…my PR’s and peaks were usually done big ring standing in climbs), in a group ride situation this leaves me having to recover longer at top of climb where the group catches and then passes me. I have been deliberately practicing sitting and spinning, on the drops (even when climbing) and it improves and I’m still very much a work in progress. Now, for VO2 max intervals, I am much better low on the drops, then in any other position. I now try to save standing for when I really need it to keep tempo or to stretch (or going for a PR where I’m going to rest well at the end). But doing that in a group ride will get me dropped hard.

While is is more efficient to ride sitting, you get no help from gravity. When you are standing your body weight is helping you on the downstroke. Your cadence will drop when you stand, so it is recommended that you drop to a higher gear to compensate. If you watch pro tour races you see many riders standing on the climbs. If there was no benefit, you would not see this. Now there is a different problem on smart trainers which i experience. If i stand, the pedal strokes become very uneven. Because cadence drops, there must be a delay before the machine picks up to keep the resistance up before the next downstroke. If you keep your cadence up while standing, actually it seems even faster than sitting, then it is smoother. However, i cannot keep up that faster cadence standing. Some have said to drop to a higher gear. I must try playing around with the gears and see if that helps.

One thing that annoys me on group rides are the people that jerk backwards when they stand up. I don’t know exactly how it happens but only certain people seem to do it (invariably the poor bike handlers).

I don’t think they actually throw it back but when they stand up there’s a relative pause or slow down compared to the pack so it seems like they are. This article says it’s when folk stand up in the same gear they are about to lose control of. 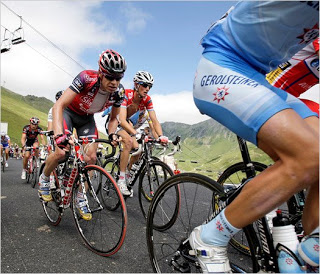 Here’s the situation:  You’re glued to someone’s wheel on a difficult climb, things start to get stretched out, gaps start to open, the guy you’re following starts to struggle, he then decides to stand up and put some umph into it.  The...

mike woods, is this you?

You can turn that into a real advantage during climby zwift races since there is no aero penalty but there is a clear power advantage.

I’m gonna go the complete other way on this. Try to turn it into an advantage whenever you can. It’s something most others can’t do.

Are there others like me out there who are constantly harassed

about their wrong form?

They can’t harass you if you ride away from them.

I was about the say the same thing. Speed speaks louder than words.

You recruit different muscles when you stand and I find that to be relieving, even if HR goes up.

There’s a definite aero penalty so I try to stay in the drops, hunched over, when possible.

I sometimes don’t have a choice. I just can’t muster enough power for some gradients in the saddle.