That is a really interesting article. Thanks

Now I almost feel bad that I got my aerocoach cockpit earlier this year. Please show it once its on your beautiful TT bike.
Do you know if they will release something for riders like myself that are inbetween 180 and 190? I already tried the new length I am allowed in non-UCI TT races last year and it felt so much better, now I would want to have the option for increased height as I plan on testing in the velodrome at the start of 2023 season.

Mine are just a year old as well. I sold them to a friend, so not much of a loss there.
These are not specifically for 190+ riders, but just specifically for 2023 regulation to maximize height of the hands, without risking to slip off the bars. So these might be useful for anyone, even if you only can only go 100mm above arm rests. As long as you want a high hands position, while still adhering to the UCI regulation, these will likely benefit you.

I’ll post images and give a review once I have something to say.

Nice, I like the aerocoach, but I confess that for every angle or change you always need to buy some part, send pictures this build.

I just sold my ascalon to a friend, and I bought the anemoi wattshop on black friday, to mount on the new ordu disc.

Does anyone know if the Ascalon extensions will bolt onto the Wattshop Adjustable Risers? I need to lower the stack on my Speed Concept because the Aerocoach mount is super high!

I plan to have a flat mount fabricated and use the watt shop risers to allow for adjustment.

Yes, we have 850mm in length from the bottom bracket to tip of extension, and we have 120mm now from middle of arm rest to top of extension.

Not ridden it yet, but here she is. Marginally different fit, with the wedges adding stack, the riser being cut down, the extensions being something like 2mm longer than the old ones. Nothing of that threatens UCi fit for me.

The hook grips feel surprisingly good in the hand, and with the Di2 shifters, I have all of my fingers gripping onto something to some degree. The different angles of extensions and arm pads don’t seem to cause discomfort, but the arm doesn’t lie as snuggly in in the „channel“ of Ascalons. 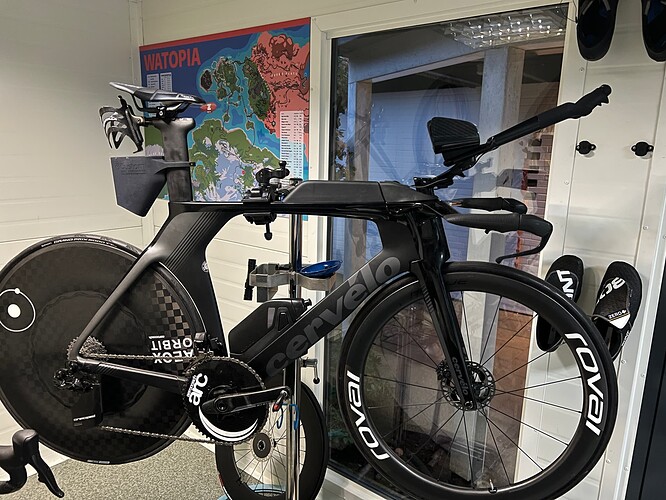 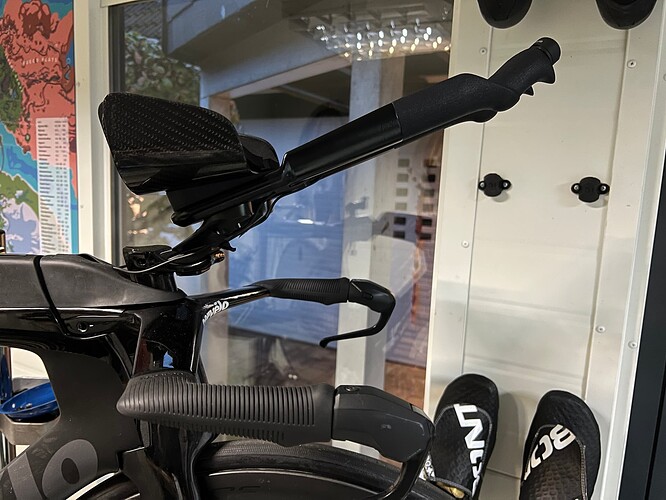 (The stupidly high box on the seat post slides down, just have it there because it blocks the seat post clamp bolt, and I was just adjusting that before).

I’ve been back on my aero testing course and yesterday had a bit of a break through. This post is for the testing nerds

To recap
Power is good, my speed less so. I’m tall and a large/huge amount of that height comes from my torso. I race UCI M3. I have a budget TT bike. In 21/22 race position (position A), my shoulders flared out with my elbows together. Aero bars are at max hight/reach for my size, aerobar forearm rests at 15deg. Hands are hybrid of vertical & dropped as defined by aerocoach

The Approach
A desktop exercise on the erg in my paincave showed I can bring my shoulders closer by 40-70mm with a different position (higher and wider forearm rests). Based on this, I decided make changes in an attempt to reduce frontal area.

I would classify these tests as comparative medium-sized position changes. As yet, I’ve not tested directly against position A. That will come later, but so far A is slower in BBS than all new positions tested. Also changed from A is mechanical to electronic rear shifting. This gives me true access to the full UCI allowed aerobar rise and reach and makes front end changes easy. Front mech bar-end shifter was removed from aerobars and I’ve stuck it in a toptube bento box while testing. 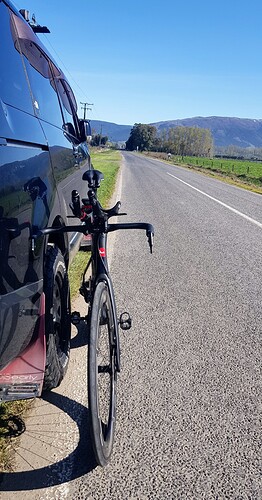 So far all good. Position D is testing fastest.

Through all my reading, although high hands is all the rage and does test well for some, it’s clear that testing is needed to determine if low or high hands is best for an individual.

G is faster than F (a breakthrough)

Where to next
Given the reliability of results so far, I’m happy, but more testing is required to confirm how fast positions F & G are. In these positions, I also found wanting a more rearward seating position. I’m keeping my head and saddle seating position as constant as possible, but I found in these positions I didn’t ‘slide forward into position’ like the high hands. I think that the lower forearms are keeping me back and longer. I noticed my upper arms are now a little more angled than vertical and this could be why F & G are so fast. (Relevant Note: when I’m testing, I use about 400m to get up to power/speed and in that time I settle into position; head/hands/seat.)

Protocol
As well my testing protocol is getting better. Adding data to my spreadsheets, simple things that I’ll forgot later like which which tyres, total system weight, specific socks and shoes. 2 new new shoes coming and will test those closer to A race. Once I have new shoes, I’ll decide on cover/sock combo, or sock and cover, or just sock and shoe (one shoe will be an aero shoe). Also need to get my son to take some pics of these positions.

So a little update and sharing of my testing. I hope this helps others, and if you have any insights to share, please do.

Nice work! I have sorta broad shoulders and tested wider elbow pads in the tunnel but it had a negative effect. I also tested raising the forearms while keeping the front end UCI legal and it was faster. They had me turn the front part of my hand downward to arch up the forearms over the extensions.

I’m excited for your results, I also have some changes planned for this year and hope for a breakthrough!

I like the custom rear storage container. Is it something publicly available? I struggle for storage on my old P2C as it has only one bottle mount and no other frame bosses. Thx! 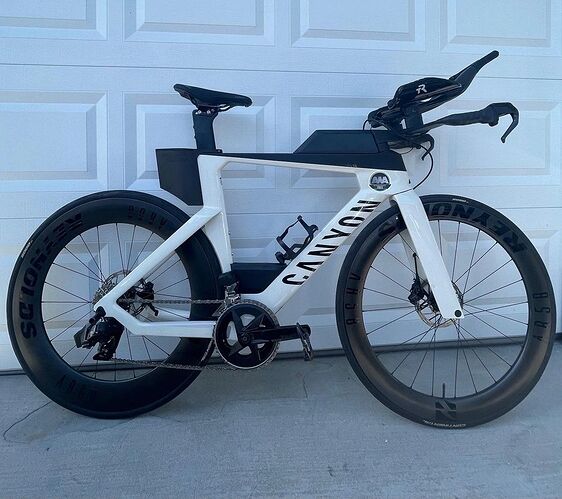 They have one for that, too. It’s a frame box though