That’s a lot of money for those wedges, but I suppose if they help make the bike fit…

Using both Mywindsock and Aerolab Chung analysis I think my CdA is around 0.235-0.240.

When I look at your position, it doesn’t suggest your CdA should be that high. Maybe have a look at the numbers you are using? Or post some analysis up? But if the numbers are correct, there’s something I am not seeing. I agree with @Power13 that you look too bunched up, and moving your elbows forward upto 50mm would be interesting. Its possible that you could move your saddle back to increase reach too?
It looks to me like your shoulders are well shrugged in, and hence you’re pretty narrow too, plus a decent suit, decent helmet (which meets your shoulders well). How close are your elbows? How much air might be getting between your arms and hitting your body? How still and stable are you on the bike?

Contrary Additional suggestion (but I’m no expert): shoulder looks too streched down (first pic it’s good to see). So maybe try rising bars further up in order to have shoulder blades more relaxed or moved closer together at the back (so your position will still be pretty flat).
(As a side note…Read something recently like: too low is slow, narrow is aero)

I don’t disagree that he may be too low, but IMO, the first issue that needs to be addressed is his reach. If he adjusts his height first, that would make the cramped issue even worse.

Thanks all. It’s both fascinating and frustrating!

In my current position I have 4cm between the elbow cups, but my hands touch when gripping the bar ends so I think I’m reasonably narrow. I could definitely be more locked in and stable in the position, but that’s something I’m working on. I do have a deeper (77mm) front wheel which I’m not using at the moment to build up experience and confidence on my 58mm from my road bike.

I tinkered with my position coming into this year - raised the elbow rests 1cm and switched to high rise bars which are +9cm higher than the stock bars I used last year (same x-axis extension which I would guess has the effect of effectively increasing reach?) I also have some custom 3D printed grips from a mate that mean I can hold the bars with a more horizontal hand position - but I’ve not been using them this year whilst tinkering with position as they aren’t the most robust!

Going back over the numbers it looks like my CdA has actually increased in moving into this higher elbows, higher and more vertical hands position which I hadn’t realised.

I’m using 97kg total system weight and CRR of 0.0035. BRR has my tyres at around 0.0025 but I’m riding on ok but not perfect tarmac. I’m using my local 10 course on a B-road for the CdA estimates since DCs give ridiculous results (I’m 0.19x on my aero road bike on a fast DC course which is obviously not accurate). The local 10 course just has one roundabout, I’d guess I get on average one car overtake me each time.

Last year, with lower hands and slightly lower elbows I did the course twice and I was estimated at 0.219 and 0.216 so I guess there’s my answer. For those runs I was also using a box section front wheel (Fulcrum Racing Zero) as I was waiting for the 77mm wheel. I should start by trying to go back to my old position and tweak from there (even if it is less comfortable). Maybe we should all just ride alu wheels too?!

I think a CRR of 0.0035 is really low and would have to be a really slick surface. i agree with the earlier comments your cda looks better than 0.235-0.24, but i suspect it may simply be explained by CRR assumption.

I guess for comparison purposes it doesn’t really matter since I keep it constant, but I’m interested what kind of figure you would use for CRR? I’m using Schwalbe Pro One TT TLE which on BRR are listed as having a CRR of 0.00243 at 100psi in their test regime. The roads I’m using are overall in good condition (outside of a couple of pot holes). 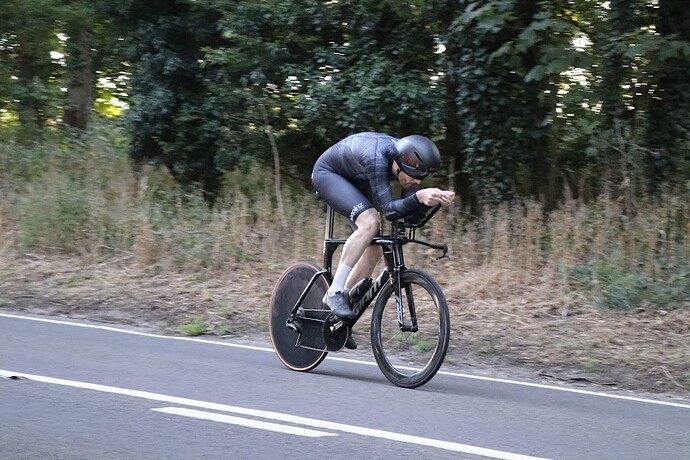 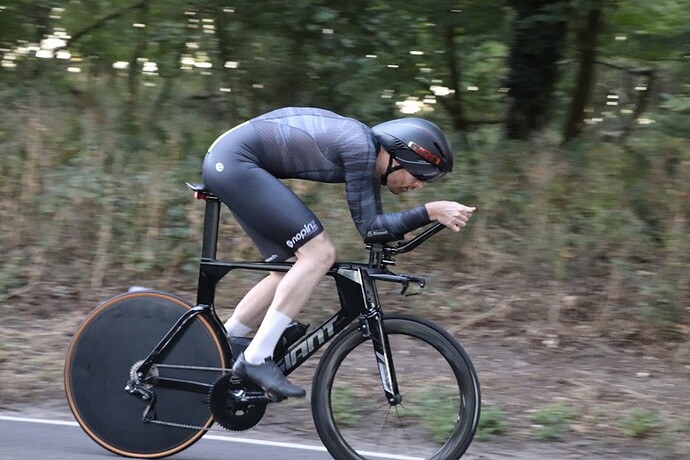 Sure, it doesnt make a difference for comparison in A vs B but a CdA of 0.225 vs 0.235 leave different prospects for further improvent in my view. Id be careful of comparisons over different days too because if the temperature was very different that can make a meaningful difference to CRR, slight wind differences not accurately captured in mywindsock etc.

My take is that a road with CRR 0f 0.0035 is really very good keeping in mind an indoor velodrome might be BRR values type range and i dont think most roads are close to that. I obviously don’t know your roads so your guess is better educated.

It is worthwhile having a look at the work Flo cycling did on rolling resistance, Silca had some values published too and Bestbikesplit has some assumptions based on what you input as road quality.

Today i got more pictures from my first TT. 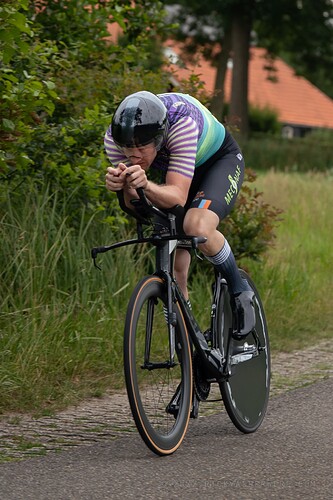 Here’s me this weekend in long-distance mode. The new drink storage things worked perfectly; 3 litres behind the saddle, hoses along the top tube. 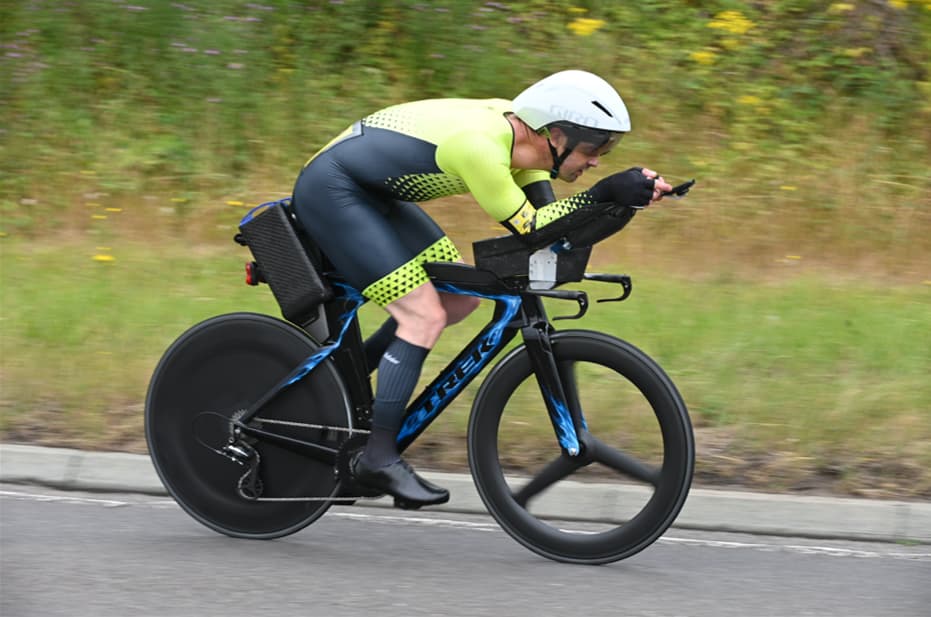 What hydration unit is that? Or is it another homemade special?

Its a Shed-Engineering hydration system

Nice. Seeing it, at first I thought Yeti got into the time trial hydration game

I’ve wanted to build a system that basically just boxes in the main triangle (top, seat, down tube) a flat piece of carbon sheet on each side with a bladder inside. I assume it might also assist with aerodynamics!?

In the market for a new skinsuit before the state championships in Sept. Was wondering if anyone had gotten their hands on the Rule28 with the aero base layer or the new Velotec Pro8. Also wondering if the sleeves on the Pro8 are smooth enough that you might be able to take advantage of an aero baselayer. Was originally interested in the new Huub suit with their baselayer, but looks like I can’t get it in the US.

I have to say I ruled this out because the aero benefit (I thought) would be small, but the potential for things to go wrong in crosswinds, especially if you run a rear disc… I don’t know

I know some people have filled part of the triangle, but there is always a decent gap. I don’t know if this is deliberate!
I suppose it would be easy enough to sticky-tape some cardboard in place and see what happens?

The reason I went for something behind me is that I saw some drag simulations, and they show just how much opportunity there is to improve flow/reduce drag behind the upper legs and torso.

great ride Greg, kept an eye on the updates throughout the day and given the bad weather and the amount that packed…chapeau!

True, maybe there isn’t any aero benefit but perhaps the loss would be less compared to the other options? And I’m not sure how it would be in a crosswind. I assume with the legs moving around, the air in that area is dirty. The cardboard idea seems very doable.