Any recommendations on which tubeless sealant to go for? It will be my first time converting to tubeless and no idea which sealant to choose. Are they all pretty similar? some seem to be way more expensive than others so assume not.

I have had good luck using Stans in my mountain and cross bikes.

I find the normal Stans sealant struggles at road tyre pressures. Great for mountain biking or CX, but just doesn’t seal well enough for road tubeless. The normal Orange Seal (ie not the endurance) seems to work well enough. Peaty’s Sealant is brilliant, but not so easy to get hold of for me

Orange is my go to.

I have always used Stan’s. Recently I used the Stan’s Race Sealant and it ended up clogging my valve stems. Not sure if this has happened to anyone else using the Stan’s Race Sealant. However it was/is a relatively easy fix. I have not tried other sealants but understand Orange Seal is great as well. I have always had great luck with Stan’s so I do not plan to switch. Cheers!

Stans (not race) is my go to, as mentioned earlier the race clogs the valve stems but it does seem to seal quicker so I guess it depends on your preference. Orange seal is also ok, but I find it more of a pain to clean from the inside of the tyre when I want to store it.

I wanted to see what people are using for road and MTB/gravel sealant. I’m running tubeless now on both my road and gravel bikes. I’ve only used Stan’s regular sealant. Either through luck or s great product, I’ve never had a problem. But always looking for “upgrades.” Which sealant do you like or dislike and why? Thanks

For me its Stans all the way. Served me well since way back in 05 when I got my first tubeless wheels. (which by the way are still going strong Mavic Crossmax SL, ssc editions)

Exact same experience that I had. Stan’s has worked flawlessly for me for MTB but could not get it to seal my new road setup.

Orange sealant did the job.

Have Orange Seal Endurance in both of my road wheelsets.
This past weekend it was put to the test for the first time. With the help of a CO2 cartridge, it sealed a nail puncture with enough air in the tire to ride home. 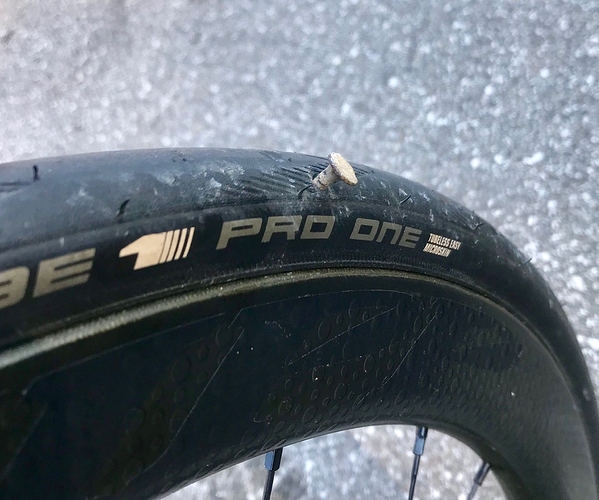 Stan’s race clogs stems like a big dog. Fortunately you can buy 10packs of valve cores cheap on amazon.

I had the opposite. I could not, for the life of me, get Orange to seal on a pair of Schwable G-one Allroads on DTSwiss r460 rims. Bike shop also had no luck. I ordered a bottle of Stan’s Race and it sealed very first time.

Should have said - think we are both referring to standard not race stans. Never tried that.

Yeah, the standards Stans sealant seems fine for me up to about 45psi, above that it struggles. At 80+psi it simply doesn’t work for me. The Stans race sealant is a different beast and, although I’ve not used it personally, seems to work well at higher pressures based on the experiences of people I ride with

I can’t add much as I am new to tubeless. I have been running road tubeless (Flo rims) for about 18 months now. I have only used Stan’s Race. It has fixed a number of punctures now. It is thick and can be hard to work with (having to pull a edge of the tyre off to pour it in) but it does the job.
I will say, I’ll never go back to a tubed setup.

no one try tire plasma tubeless sealant? made by E*thirteen components

Stan’s or Orange Seal. Those two seem to dominate the US market. I’ve used both and only every had one puncie that wouldn’t seal…and that was a slow leak. If I’m riding tubeless it’s during a 100+ gravel race, though. So depending on where you’re riding there might be better solutions.