What if I only did Sweet Spot workouts?

Why not use the fatigue dependent model of SST?

I’ve never heard of this, to be honest. Is there a link to where I can read up on it?

Also, what I’m gathering from early feedback on this question so far is that to do ONLY sweet-spot, I would probably have to dedicate a lot more time to training than I currently can. Which is something I’m unable to do…I really only have a max of 7-ish hours a week to train…and most times it’s really between 5-7 hours.

Shouldn’t SS be pretty easily manageable for these shorter durations?

Typical response to this is around muscular endurance but it also about mental endurance. By the end of a 20-30 minute sweet spot interval your brain and legs should be pretty equally bothered by the unrelenting nature of the effort. People need to work up to this even with an accurate FTP

FasCat Coaching’s website and podcast is a good starting point. You’re basically riding hard”ish” until you tire and then backing it off. This is much easier to do outside because it’s how most people already ride if they’re riding for fun and speed. Indoor can feel like a slog.

If you have 5-7hrs to train you could do all SS in structured intervals or you could ride SS freestyle, focused on time in zone and mix things up. See how long you can hold it and try to improve as you progress.

I’d suggest doing whatever keeps you motivated to ride. The same podcasts I mentioned tend to be against long trainer rides more because of mental than physical burnout. If it’s not fun and you don’t want to ride, you won’t get faster.

I was just talking to another coach who works with a lot of exTR, Sufferfest, etc athletes and mentioned that all of the structure leads to initial big gains and high enthusiasm followed by plateau and mental burnout. They may take a break for a season then sign up and do it again, make gains but still be at the same level due to inconsistency. Whatever training keeps you engaged is the best long term and chances are you’ll mix it up from time to time. We’re all doing this for fun after all.

I’ve never heard of this, to be honest. Is there a link to where I can read up on it?

Google “Frank Overton sweet spot” or “fascat sweet spot”. It’s basically what he does. One nice thing about that approach is that you’re also building in time to exhaustion (TTE) kind of organically without having to closely track progression of interval length (or even knowing what it means). I prefer to track progression (as @trpnhntr explains it).

Frank is great. Has a tremendous podcast as well and everyone should listen to his winning in the kitchen. He’s also a hell of a coach.

I had very similar thinking to you. My first season I did SSB 1 MV → SSB 2 MV → General Build MV → Rolling Road Race MV. At the end of the season I just felt really beaten up, especially from the VO2 max workouts. I’m not preparing for any specific event, so I decided not to do this again. I got good results from this plan, but the motivation took a hit.

The next season I spent more time thinking about what was important to me, what type of workouts I enjoyed and changed things up a little. I decided to switch to SSB1 MV → SSB2 MV → Sustained Power Build MV —> [repeat]. I just liked this a lot better. There is still good variety in here, the VO2Max workouts are peppered in enough so that I still have a little “up and go” if I need it, but the focus is so much more tilted toward longer sweet spot efforts. My FTP took a big jump after Sustained Power Build which was nice and out on the road I just felt like I had such a big stable engine. On group rides on short climbs (3 min sprints) I was near the front instead of at the front, but in the group I could just sit there and chat then do 10 or 15 mins on the front and dish out pain. Overall I just really liked the changes I made. Take a look a the Sustained Power Build plan, you might find it suits you.

Agreed. I’m still a TR user but being a late adopter of structured and metrics based training I prefer the overall vibe. I chalk it up to him and his coaches having at least elite amateur racing backgrounds as well as working with masters and newbies.

It’s nice to hear people talk watts but also RPE and common sense. Also very little focus on the importance of equipment vs performance. Some pods can feel like an hour of what you need to buy to get faster or how you need to fuel just enter your first cat5 race.

as well as working with masters and newbies.

And at least one pro: Phil Gaimon.

Same. Still a TR user, but I have been doing structured training for about four years - sometimes very diligently and sometimes I stray off of it. Have used Frank in the past, but due to $, I am doing mostly TR with some of his stuff still sprinkled in here and there. His podcast is great and yeah - common sense.

I personally really enjoy only doing sweet spot, the caveat here being I’m doing the HV plan, so it’s all I’m doing, but that type of effort seems to suit me (which means I really should be working on what I stink at, but there’s the rest of the year for that lol).

I can say I have made progress working exclusively in the sweet spot zone, I think I’ve made my (FTP) gains only in SSB, I’ve done general build last year and then prior to CX season I think a CX specialty plan and didn’t see any FTP improvements (although my ability to suffer at the highest wattages most certainly improved).

As far as duration of interval, I don’t know if it necessarily matters, but as far as moving it to what one might see in a real life event (long stretches at power with no breaks) I think progressing from shorter intervals to stringing together longer stretches of 20mins (or even longer if you’re inclined) can definitely help you if you’re ever in an event where it can be relentless

Interval length absolutely matters. You should be constantly trying to increase interval length for these efforts. 6x10 is great, but 5x12 is better, and 4x15 even more so. Go all the way to 1x60 if you want

I think SSBHV “gets boring” only because there is very little variation within the plan. It’s the combination of both a narrow degree of intensities (88-94%)* and a narrow degree of durations (10-20min; 90min max/session). And it doesn’t matter how many times you do the plan, it’s never going to change. There are certainly business decisions which dictate this concept and progression within TR, but you certainly don’t have to adhere to them.

Freestyle SS work using the fatigue dependent model is great training in general and may be just the thing if you need a break from staring at screen and agonizing over intervals for a few weeks.

Sweet spot is a set intensity parameter, so the only thing you can change is duration, of both interval and total length. To break the curse of a dead brain you have to do different things. For instance, I’m choosing to ride SS intervals which mimic my A Race, ~30min. So maybe I’ll do 3x30min @90% in one workout…or do 6x5min/1min @94%, maybe on the weekend do 2x60min, etc.

There’s lot’s to play with if you spend a bit of time to think about why you are doing SS in the first place. If you have historical power files from rides/races that you will be doing in the future, look at the ‘time in zone’ and see how much you spent in the SS. This might give you a ballpark idea of how to arrange both intensity and duration of your intervals.

Good luck to us!

That’s the pattern I’ve been using to build FTP without any specific event in mind. I’m half way through Sustained Power Build now, but I will be doing a Century Specialty this go around as I have a cycling vacation in Europe for a couple of weeks in July that I want to peak for. When I get back I’ll go back to my Base - Build - Base training plan.

I’ve already had a long base starting Sept 24, and will have some long weekend rides sprinkled in going forward. Given that, I’m more focused on the repeat pattern before taking mid summer off and restarting my season the last week of Aug.

Gotcha. Yeah, I just run straight though all year round so I have to have a break somewhere. I don’t think you could sustain SSB2 + Sustained Power Build for too long without burnout.

I am also 44 and took last year off, so, I’m rebuilding for 2019 and was in the same spot as you after SSBMVII. Had my Short Power build plan ready to go and put it on hold in favor of a couple more weeks of endurance before headed into build based on @brendanhousler blog entry here: Power Zones for Cycling Endurance Rides Explained | EVOQ.BIKE

I modified the last three weeks of SSBHVII w/ some outdoor rides including a 3 hr. fixed gear session that included 4x15 at our local track and some road race simulations on the weekends. Had a rainy Saturday and decided to do a 4.5 hour endurance ride on the trainer instead (it wasn’t as bad as it sounds - I caught up on some TR podcasts I had missed). 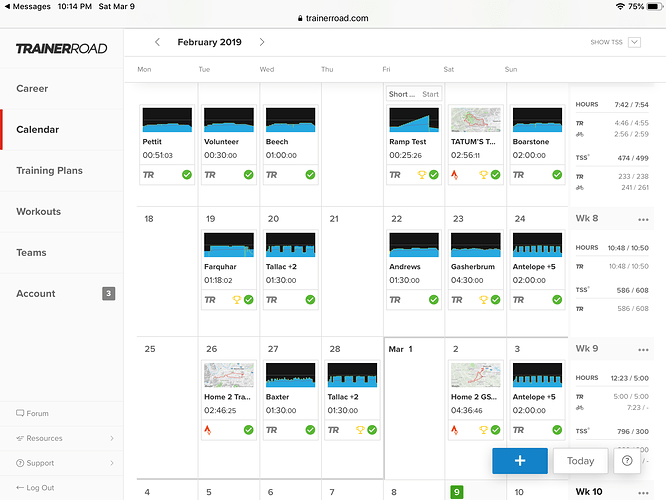 Here is another EVOQ blog entry that speaks specifically to sweet spot as you’re referring and the gains to be made: Sweet Spot Cycling Professional Training Plan & Guide | EVOQ.BIKE

I will say the rest week after SSBMVI & II wasn’t restful enough to get my fatigue down enough to be ready for a build, so, took two days off, two easy days and then another two days off and will probably do something easy tomorrow before heading into a modified version of Short Power Build HVI.

I’m in the same boat and came up with this balance (skipping first 2 weeks of SSB1):

Inspired by Alternate Base Work-Recovery Week Layout - Training Plan Modification I came up with another approach of combining and shortening Sweet Spot Base 1+2. I plan to use this as the second Base phase in a progression of: Base 1+2 => Build => Base 1+2 => Build whereas my alternative would have been to just go standard Base 1+2 => Build => Base 2 => Build The adjusted plan skips the easy first 2 weeks of SSB 1 and then consists of 2 parts with 4 work weeks each. In order to get a ver…