The Bell curve of cylists - how fast are the average TR users?

I’m curious how fast cyclists are relative to each other. What’s the “average” power of us all? Do we need a poll or can this be pulled from the TR data?

I’m a long time TR user and i’m in that middle ground of it all feeling like i’m going quite fast, but how fast is “fast” and how much faster is “really fast”?

I am in my mid-forties and a non-racer apart from triathlons where i generally do pretty well on the bike. I sometimes do Zwift races in either B or C depending on whether i’m feeling like beating myself up and i generally fare ok. Occasionally though i find myself getting utterly nailed and left for dead by people that are very clearly much faster than me.

So, if i’m currently at 4.2W/Kg how does this rate in the overall pantheon of riders?

Edit by Chad McNeese: I added quick access links to the useful references shared by Nate, that have a range of info & charts related to this discussion:

7 Likes
Watt/kg Bell Curve
Average watts per/kg data across TR users broken down by age
Who's over 60 y/o and using TR?
W/kg bell curve adjusted by age and gender
W/kg goal for hilly gravel rides e.g. 1000 ft per 10 miles
TR makes you this much faster – 185 data points and a model
Climbing, Elevation, Over-Training and More – Ask a Cycling Coach 223
FTP Improvement
Your FTP improvements
Are there any mere mortals on here?
How do I compare to other riders in my Category?
Cyclists over 100kg with 4 w/kg FTP?
TR 2020 Running Thread
Am i too old to keep building?
Your FTP improvements
Pain Tolerance, Body Fat, Descending and More – Ask a Cycling Coach 211
fasterthanever November 15, 2018, 12:12pm #2

On the podcast, the guys have said 4w/kg is well in the minority. Those guys are normally in the low 4’s too, and it’s obvious they train a TON.

I race triathlon so a really good bike split can go a long way towards a high finish, but it is not the only thing.

I was just thinking about this yesterday, as at the pointy end of the race there is a big difference between finishers to improve placing. In the middle of the pack, five minutes can get you 20+ spots in the overall but might only net me 1 or 2 spots. This is also the point of diminishing returns, so an improvement of five minutes in an olympic race is not easy.

Back when the Sufferfest supplied training videos, there was someone who compiled a graph of reported FTP for one of their stage races. I’ll see if I can dig out the graph or the link. However, the average was low, below 200W as far as I recall [edit: my memory is bad, it was 237W]. While there might be many reasons for this, the average seems consistent with large cohort tests I was involved in back when exercise physiology was part of my job.
It would be interesting to know how TrainerRoad users stack up, we might fall broadly into two camps based on how long we have been members - trained cyclists and just off the couch. 4W / kg is good, going on any group ride will tell you that during the first climb… 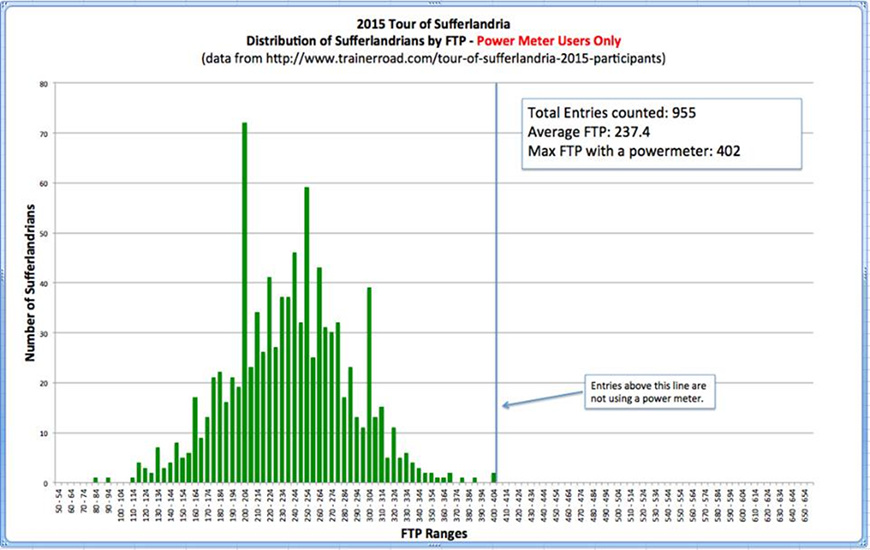 Given the size of the cohort, the bell curve shape is not likely to have changed (unless we have all got fitter in the last three years) even though n=>10000

TR have this. Perhaps @Nate_Pearson would consider sharing the distribution?

Because the "A"s make me really suffer. An hour at only 300W with the "B"s is enough of a workout for most days.

You can use Coggan’s chart to see where you fall in these curves - but it varies greatly depending on who you are considering.

Within the trainer road chart will naturally contain a higher W/kg than folks who aren’t attempting to follow any training plan - but it really depends who you are comparing yourself too and who you want to populate your N.

I think we can safely assume there will be some absolute monsters in the TR survey!

This chart is interesting and is a good example of why we can take the accuracy of self-reports with a grain of salt.

Those big spikes are at the 200, 250, and 300 watts levels where people have picked a nice round number. I have no doubt the general trend is represented but some parts should be viewed with scepticism.

Also add into the grain of salt people like me who use an Elite turbo muin (or similar) that over reads power by ~20%. I love the numbers it gives me, but I know I’m not that fast.

@willball12 @steveking the data of people with power meters is probably the more reflective of how things actually are. Agreed that the round numbers are suspect, the 200W was used by TrainerRoad as a default, I don’t know whether that is the case now? The round numbers are also interesting, and not necessarily arbitary. I would like to have an FTP of 300, but as this is my goal I may subconsciously stop training once I have reached that level. This is discussed in one of @chad 's recommended reads “How Bad Do You Want It” by Matt Fitzgerald, in the context of why the record for one mile (running) stood for so long just above 4 minutes

There is also potential for bias in that people with lower numbers may be tempted not to divulge their FTP (or to inflate it) even if it’s anonymous.

The identification of those spikes has also been used to identify voting fraud. A Russian researcher identified a large number of voting areas which reported turnouts of 70%/75%/80%.

Yes, based on the large spikes around the round numbers and the likelihood that people would over-report their FTP…I’m guessing the true mean and median are probably at least 10 or 15W less than that graph shows.

We’re twins! I have ten more pounds to lose and twenty more watts to gain. I should be looking at 3w/kg soon.