It could also just be your physiological makeup. Either way, it’s not a bad thing, not everybody’s VO2max is 120% of FTP. Just adjust the intensity to something that suits you. It’s not failure, it’s success.

Delayed response - 100% agree with your point and think it’s important for riders to know that 120, 130, whatever percentage are not miracle numbers.

Mention my experience as have a ton of data. When I switched training from criterium focused to TT focused some of the top end went away due to training changes. Over a period of 5+ years the 1 min and 5 min maxes dropped.

Recently decided to take more time mtn biking and a bit of a break from TT’ing so working those shorter duration efforts again and seeing the snap coming back. Albeit slow progress.

I’m also old (low 50s LOL) and very much consumed with career so an odd time for training.

Cheers and thanks for your continued insightful posts on the forum.

This has been my experience too! I train 6 to 9 hours a week. I did the sweet spot base plans last year and found them hard to get motivated for. They were very monotonous and the ‘semi-hard’ nature of those workouts seems (for me anyway) hard to psych myself up for.

Did my best HC climb after doing high-volume sweet spot base, thought it was perfect prep for a 2+ hour sustained climb.

My biggest ftp gains were from pyramidal training, during a 3 month period with distribution roughly 40% zone1, 45% zone2, 15% zone3.

Also seen good gains during periods of time where I increase long rides in zone 1. I’ll bet polarized would work well for me too, in particular for events like crits or road races. At times I think more time in zone1 is needed to work its magic, which means 12+ hour training weeks. Sweet spot definitely works for me on a 6-9 hour training week.

Are those percentages time based or session based?

rough averages for all workouts over the 3 month period.

So ~7 hours per week? If you increase volume in the summer how does that change the distribution if say you up it to 12 hours?

My WKO4 modeled FTP went from 239 in early January to 278W in May, then dropped into 250s by July with a whooping total of 25 hours between June and July (my off season). Stayed in 250s until dropping into 240s by December. A testament to the lasting impact of building a large (for me) aerobic base.

Hmm i need to update my GC to see my distribution. During our prime riding reason I’m close to 15-20 hours/week

I’ve got 3.4 latest stable release of GoldenCheetah, then went to:

I’ve been dabbling with polarized training for a few weeks now and I’m approaching my next ramp test. I’m curious about the recovery week structure people are following, all advice welcome.

I set this chart recently and have asked Mark how he is defining the Polarised zones, no answer yet.

Colleagues – For the folks doing, or trying to get to a point of doing “polarized”, specifically working toward 4 x 8’s or doing them, is it worth having a support group thread for progress and general “this workout kicked my butt” type stuff.

I know there is the Workout of the Day thread but that is diffuse and the big POL thread Chad M. created.

But this 4 x 8 fixation is a specific type of bike training fetish.

Just a whole week of LT1 I guess but in all honesty is there really such a thing if you’re doing 80/20 By session ratio? I don’t really think you’d need a recovery week per se.
Am I wrong?

I set this chart recently and have asked Mark how he is defining the Polarised zones, no answer yet.

Ah I’m not code savvy so thanks for that, was a good idea. Mmm, I’m not sure about those percentages tbh as CP and FTP aren’t the same thing. Need to think about this.

For the folks doing, or trying to get to a point of doing “polarized”, specifically working toward 4 x 8’s or doing them, is it worth having a support group thread for progress and general “this workout kicked my butt” type stuff.

Ah I’m not code savvy so thanks for that, was a good idea. Mmm, I’m not sure about those percentages tbh as CP and FTP aren’t the same thing. Need to think about this.

I switched from Golden Cheetah to WKO4, and can easily define my own charts with customized polarized zones.

After missing the Spring season due to illness, I set a mountain summit finish RR as my goal event for the year (it was the first Saturday in June). My prep was to commit to riding 300mi/week for four weeks, two days of riding intensity zones 3/4, and every other days riding in intensity zone 1 or 2, depending on how I felt.

I’ve kept up with the same 300/week, two days of zone 3, the rest zones 1-2. It’s been three more weeks, FTP is up a bit. I’m lucky in that I’ve had the month off from teaching, so all I have to do is ride and recover (And my 52-year-old legs need it!). One more week of this and I’ll do my first intervals of the year.

The Keep It Simple part: really, all I’ve been doing is the same thing that HR-based coaches were saying, and I was doing, 30 years ago. Ride as much as you can. Two days of maybe 40 min in HR zone 3 (in a 5 zone system), the rest in zone 1 or 2 depending on how you feel. After 12 weeks of that, “polarize” and start doing the zone 5 work.

It works, whether you’re doing 20 hours a week or 8. On the low side of volume, you’re riding a bit more in HR zone 2 and less in zone 1. Maybe the hard days are zone 4 rather than the 3/4 borderline. But it’s about the same as Lydiard was saying in the 60s. You can powermeter or lactate analyzer split hairs over this (and over the last 20+ years, I’ve gone down that rabbit hole), but it’s pretty simple.

I would tend to agree on the LT1 but I would like to refer to the study of Thomas Stöggl and Billy Sperlich on Polarized training (group C). 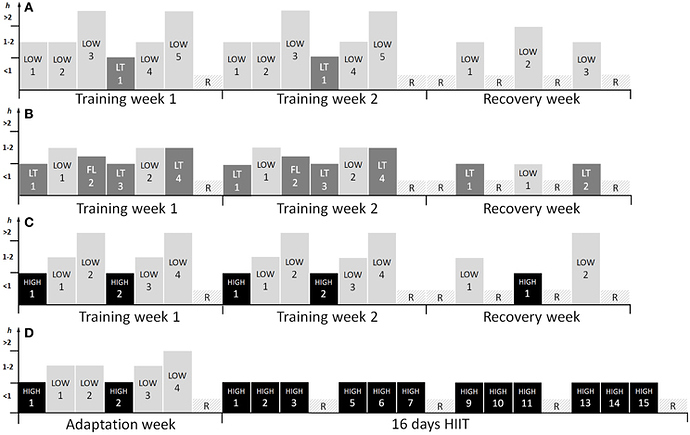 I’m probably overthinking this as per, I might experiment with each successive block and see what works best for me. thanks @ValeCyclist

This is brilliant @mcneese.chad, I’ve copied this for editing myself. I only started looking into POL today and I have gone so far into a black hole I don’t know how I’ll ever get out. I’ll be sending an SOS on here if I can’t!

Good deal! Glad you found it and I hope it helps with your research and journey