As far as FTP improvements do you think the sustain Build would generally produce a higher increase in FTP than a General build plan?

For the type of event you’re doing, the percentage of your FTP you can hold for several hours is much more important than the FTP number itself. You want the training plan to reflect your efforts as much as possible, so I agree with @mcneese.chad Sustained Build and Century Speciality should be your go to. This is of course assuming you’ve completed SSB I & II, if you haven’t I wouldn’t skip those since your event is all about aerobic base.

I’m determined to get north of 300 FTP and 3.5 w/kg by the end of the year. I’m right around 3.1 w/kg now. I’m definitely no expert, but my plan is to do Sweet Spot Base I & II starting in July followed by Sustained Power build. Glad to see these plans suggested here.

Are you just chasing a metric, or are these markers important for an event you’re training for?

For what it’s worth, I think SSB I & II with Sustained Power build is an excellent combination to build FTP and not be so taxing that you can’t also shed some weight at the same time. I find it hard to be in a calorie deficit and also have enough in the tank for tough VO2Max efforts.

As for me, I live/work temporarily in a part of the world where security issues keep me from riding outdoors until I go on vacation or go to a safer onward assignment. Thus, I have no events and few things to motivate me but improved metrics. Best I can think to do now is build as much power and endurance as I can on TrainerRoad.

I would second the suggestion to do a progression from Sweet Spot to Sustained Power Build. That was my offseason progression, and I saw an overall increase in FTP of around 20 — while dropping weight. During the same period I lost about 15 pounds, so although it took some discipline, it’s not impossible. I’ll be honest, the lower weight is helping me more on the climbs than the increased power. Big long rides are all about sustainable power and being able to work sub-threshold for a long time. The other factors, as you know, are issues like mental toughness, nutrition, ability to endure saddle discomfort and so on.

Mostly I’d say as long as you are training with structure you will come out ahead of any year when you were just puttering around or making it up as you went.

Ok makes sense. I had a similar situation last year where I couldn’t ride outside for 7 months. With no events and no outdoor riding to disrupt my training, I adopted the approach you’re describing.

You can see my FTP progression here with the training plans I followed (I marked the data points for the FTP test I did after the completion of a training block, rather than at the beginning as it appears in the plans). 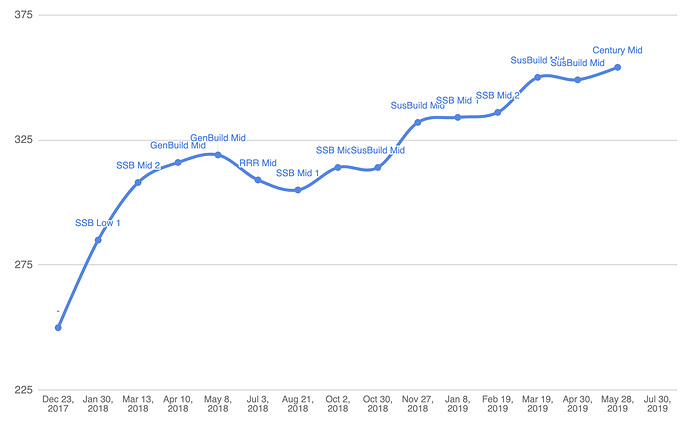 Thanks for all the great insights gentlemen, I’m about to finish SS LV II now and will go to sustained power build then century on the specialty, I’m confident now that will be the best course of action!

Thanks for sharing this chart, Julian. Gives me hope that my goals are challenging and attainable. My best case scenario is that I’ll be able to time an R&R trip to the States with a 100 mile gravel grinder some time in the first half of 2020. I think the SSB - SusPB repeats will be my approach until I know what that timing looks like.

I like this graph…did you just create it in excel?

Ok nice. Only problem is I can’t remember which plans I’ve done exactly over time. Might start this from now.

You should be able to roll back on the calendar and see your plan starts.

Yeah thanks, done that and I’m good up until June last year so at least I can start drawing a graph similar to the above.

Not really useful yet but will keep track going forward

don’t forget some solid vo2max work; you’re going to want to be able to drive over some of those climbs, and no doubt will be riding above FTP if there’s 12k elevation.

Sounds like an incredible ride! Let us know how it goes!

Would you recommend tempo/SS/threshold work until 4-6 weeks out, then the vo2 work during the final 4-6 weeks prior to the event? I ask because my understanding is vo2 is quicker to show results on training investment. Thanks in advance.

Sustained Power and Century have VO2 in them. E.g., see the Tuesday workouts in Sustained Power and the Monadnock, Shortoff, Old Rag progression in the back half of Century. I don’t see why one would need to do anything but stick with Coach Chad’s plans.

just one vo2 per week with the SS/threshold as your 2nd hard ride. Then maybe a hard group ride. Those 3 is more than enough intensity to crush it!

lmk if you have more questions

This ftp increase is bonkers!

I know there have been feature requests already and there is an example of a graph that should be part of the TR profile @Bryce @Nate_Pearson:

Ok makes sense. I had a similar situation last year where I couldn’t ride outside for 7 months. With no events and no outdoor riding to disrupt my training, I adopted the approach you’re describing. You can see my FTP progression here with the training plans I followed (I marked the data points for the FTP test I did after the completion of a training block, rather than at the beginning as it appears in the plans). [20%20PM]