I’m planning on doing some XC/marathon type events next year and am looking for a new bike. Fitness and climbing are my strengths, general bike handling and descending are weaknesses (getting better all the time!). I already have a ‘bigger’ bike that I ride a lot.

My question is this: Would you get a downcountry bike (love it or hate it, that classification is here to stay) that is XC-efficient with some trail characteristics (new Norco Revolver), or would you get a light trail bike that is insanely capable over a wide array of terrains (new Ibis Ripley)?

I’m leaning toward the Ripley because I feel like it will give me more confidence in the tech-ier/steep stuff.
Even though I will pay a couple pound weight penalty, I feel like that’s probably a good trade off.

Any opinions? I won’t have the option to demo either bike, but I have demoed the Ibis Ripmo, which has very similar geo to the Ripley.

Hell, if I ever get good enough that the bike is holding me back, I will happily drop cash on a world cup level XC bike.

If you figure it out let me know… I posted a similar question before and I didn’t decide conclusively yet. Deep down I want to get the pivot Mach 4 sl but I don’t want to spend the money…

Everyone will have an opinion on how much bike you “need” - and the answer will obviously vary greatly based on your riding style, the terrain you’re racing on, and your goals (and other variables, as well).

My opinion… Even the normal category XC bikes are really, really capable nowadays. A few months ago I switched from a previous generation Epic to a Pivot Mach 4SL, and the difference is astounding. The Epic was a great bike, but the Pivot handles the chunky stuff and high speed rough trail with a much more confidence-inspiring ride. While it’s a great bike, I don’t think the new Pivot is all that much different than other bikes in its category (despite what its price tag might infer).

So, depending on just how rough/technical the trails you’ll be racing are, I would lean towards something more towards the XC side of things. It’s not so much a weight thing - though that’s an easy way to compare two bikes. I doubt you’d really notice much difference in performance with a pound or two difference, but you will absolutely be able to feel if a bike has been made with an emphasis on pedaling vs coasting (aka descending). Keep in mind that these two attributes are not mutually exclusive, but it might be the most important feature to consider when comparing two bikes.

depending on just how rough/technical the trails you’ll be racing are, I would lean towards something more towards the XC side of things. It’s not so much a weight thing - though that’s an easy way to compare two bikes. I doubt you’d really notice much difference in performance with a pound or two difference, but you will absolutely be able to feel if a bike has been made with an emphasis on pedaling vs coasting (aka descending). Keep in mind that these two attributes are not mutually exclusive, but it might be the most important feature to consider when comparing two bikes.

Well said. I demoed a bike last week (2018 Intense Primer) with the same HTA as the Norco (67.5) but much shorter reach. It felt great when I was laying the power was down, but I felt that something was lacking on the descent. I’m not sure if that was reach, HTA, or a combination of the two.

If you figure it out let me know… I posted a similar question before and I didn’t decide conclusively yet. Deep down I want to get the pivot Mach 4 sl but I don’t want to spend the money…

I ended up with the Scott Spark RC and really like it. I also bought a 120mm Fox 34 fork on sale for half price and a spare set of rims so I could run it in trail mode for the rougher marathon races.
It’s also really good fun in this mode at the local trail parks. Slap a set of aggressive tires on the spare rims and it’s really only the crazy downhill runs that I shy away from.

To be totally honest, I didn’t even know who Nino was when I made my decision. My mate had the 920 trail version and I really liked the overall package.
The Twinlock suspension was another selling point as I really like the way it makes the rear sit up in the mid setting.

The Norco Revolver was also on my shortlist at the time.

I’m obsessing about this so probably almost every bike in the category. However, I’ve been close to buying the following:

Pivot Mach 4 sl - the number one reason I haven’t ordered this yet is I’m going to outerbike in Moab next month and I’m hoping to spend some time demoing most of these bikes.

I had the same question and I ended up deciding on a 2019 specialized epic, very happy with my choice.

I forgot to mention, if you feel uncomfortable descending, look into your options for a dropper post. If you think you’ll use it.

Best upgrade you could buy really. Unless you’re racing World Cup XC then you should have a dropper post. Makes 100mm travel bikes just as capable as longer travel bikes in the right hands.

In no particular order, other than it came to mind first:

Yeti SB100 (pricey for what you get though…paying for the name)
Trek Top Fuel (2020 version)
Pivot Mach 4 SL
Salsa Spearfish or Horsethief (has room for two waterbottles)
Spesh Epic EVO (a bit meh in my view, but each to their own)
Scott Spark (more XC than XCM)
Canyon Lux (more XC than XCM)
Norco Revolver
Intense Sniper (Trail version which has 120 fork would be best)

…and once it is released, the all new Rocky Mountain Element. Or if you can’t wait, a 2018/2019 RM Element will be a good price and it is the original Downcountry bike - always had 120mm front fork. Rocketship of a bike.

Even though some of the above are flexstay bikes, I do tend to keep away from them, but each to their own

I don’t agree. I race my Spark for XCM up to 12 hours, and I’ve only to glance up to see a lot more of the same bike around me.

The more I see of the Pivot all I really see is the price of the thing, and on another forum a chap commented that 2 weeks testing of the new Oiz and Spark back to back showed the Spark was a much better bike.

One thing I have learned about the Spark is that the rear shock pressure is a bit fickle, but once you’ve found that magic number it really does have a great ride and the current twinlock is a very awesome system. It Descends very well indeed.

Best upgrade you could buy really. Unless you’re racing World Cup XC then you should have a dropper post. Makes 100mm travel bikes just as capable as longer travel bikes in the right hands.

Any more comments on this? I bought a Brand X external dropper for £80 / $100 as an experiment on my hardtail. I liked it - not just for drops but say 20mm lower when attacking a trail helps manoeuvrability I feel - but am I undecided whether to put it on my Spark - my head just keeps repeating “weight, weight, weight”.

I have my final Marathon - a local 50k event - mid October preceded by two training weekend incorporating long Xc rides, and the other part of my header says “put the dropper on and try it”.

Did I miss the discussion on what type of terrain you’re riding? I just switched from a 2018 Top Fuel (100/100) to a 2018 Scalpel SE2 (120/115) bike and mainly race CX but found myself riding bigger, rockier stuff, wanted two water bottles, and found a sweet deal on the new bike and loving my decision. What I got was a little different from what I expected. I wanted a bike that made going down arroyos in El Paso and riding big rocks in Albuquerque a bit easier; I got all of that but also found a bike that climbs extremely well over loose rocks, roots, and ugly stuff with the suspension “open”, and appreciating the super-high bottom-bracket the internet reviewers complained about. I also found myself not needing the two water bottles as I fell in love with an USWE pack, and I’m the kind of guy who put the flat-pack in a pocket rather than a saddle bag.

There is so much more to these bikes than the travel. Even half a degree of head-tube angle makes a difference in how the bike feels. Some bikes (like my Scalpel SE2) change dramatically depending upon how much seat-post hangs out. Valving is also unique to each bike, so consider that. I think you should demo before you buy.

I came around on the dropper post concept, I won’t have an MTB without it now because I’m going down some big stuff that seems unreal to me, all because I can get my butt out behind me.

My recommendations are to get a 120/120 bike, for sure. I like the EVOL dampers for how the ride.
2 bottles is nice, I throw drink mix in there and water in the backpack for long races that I haven’t done yet.
I really like the Trek Reactive rear damper on my old Top Fuel
Get a dropper, for sure.
You will adapt to BB drop but might find yourself leaping up on the saddle to mount, lol.
Throw a few bikes into Geometry Geeks and see where that points you.
Add Cannondale Scalpel SE2 to your list, can probably find a few on fire sale. 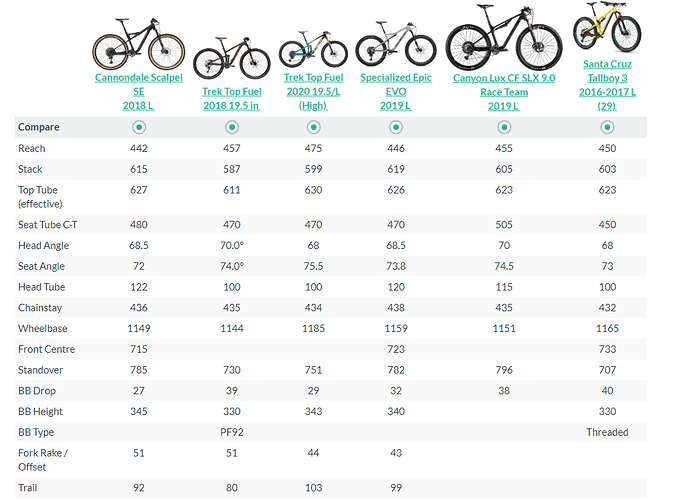 Oreba Oiz TR seems like a perfect bike for you. 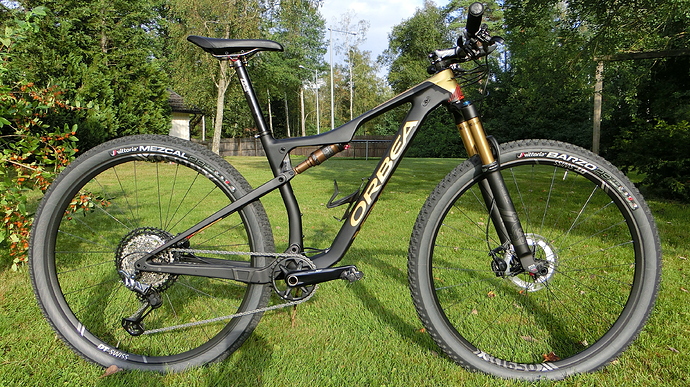 Do you know if the Orbea can hold two 750ml water bottles?

I agree 100% with the dropper post comment. Yes, it’s going to add weight to the bike, but you are nearly guaranteed to make up the small difference in cornering and descending speed. Plenty of the guys and gals on the pointy end of the world cup races are running droppers, and for good reason.

I just moved from Michigan, where the race courses are almost all flat, fast and generally non-technical. Even there, I was able to get some use out of the dropper, usually in sweeping corners (easier to get your weight/CG lower) or short, fast, ‘turny’ downhills. You’d be amazed how much more confidence you have at high speeds without the seat tapping you in the bum. Once you’re on a course with more descending than those in Michigan (which is pretty much everywhere else), the advantage of the dropper becomes quite clear.

Can you ride most (all?) XC courses without a dropper? Sure. Will a dropper make you a better (faster) rider? Probably.

Thanks. I’ve always liked those bikes but two bottles is a requirement.