Anyone tried the Feedback Omnium Over-Drive?

Been considering ditching my Snap for something else and I’m intrigued by this guy. Anyone use one for everyday training? 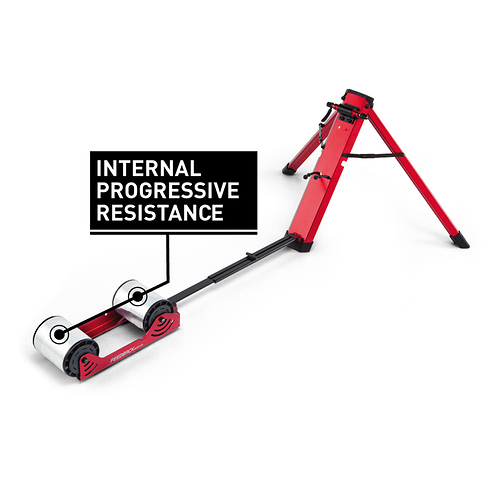 The Omnium Over-Drive's fork-mount design keeps the rear wheel on the bike and offers the most realistic ride of any stationary bike trainer available.

The biggest issue with this (and just about any rollers), is the really low inertia. There is almost not “coasting” able from these as they stop within seconds. It results in a different pedal stroke and power delivery when compared to a trainer with a large flywheel.

This leads into the whole idea of low or high inertia training, and can be full of opinion and speculation. Either way, this will likely have far less inertia than your Snap, even in a low gearing position.

I think both @Nate_Pearson and @Jonathan use them when traveling, but I don’t have any experience with using this for everyday training.

I race for Feedback here in Colorado and have this trainer along with a Kickr and Kurt Road Machine. It is absolutely fantastic for race warm up, travel, etc. We bring it to every cyclocross race and we’ve also taken it with us on riding trips, just in case the weather sucks we can ride under our camper awning or in a hotel room.

As Chad says, it is low inertia and stops almost immediately when you stop pedaling. For serious daily training I would recommend keeping your snap or upgrading to a wheel off design like the kickr, etc. It is also very hard to do much sprinting on it so you’re going to limit the workouts you’re able to do.

I have this trainer and absolutely love it! It is so great for traveling. I have been studying in Ecuador since January and train on mine just about every day. I have a Kickr back home in the states, but I would have no issues training on this daily instead.

I have a SNAP and have borrowed an Omnium on a few occasions.

BLUF: I have a SNAP and am planning to buy an Omnium to complement it.

The biggest issue I have with the Omnium is the ultra low inertia as @mcneese.chad said and so I wouldn’t use it for daily training (whichever side of the inertia argument you fall on personally I prefer something a bit higher as I feel it is kinder on my knees).

That said, when I’m travelling it is a god-send, far easier to move around than my SNAP and gets me fewer strange looks carrying it in and out of the car / hotel. I also don’t use a trainer tyre with it meaning less to worry about if the weather is variable and I’ll be swapping between TR and the road (that said recently I’ve been seeing more tyre wear than I thought).

In addition to the opinions, there is a large body of science about inertia and resulting pedaling effectiveness. It’s an interesting topic that does result in consistent findings. Not that those finding are universally applied, unless looking at riders who ride a lot, in which case it (low inertia) does have a positive correlation to pedaling effectiveness.

That said, when you say “biggest issue”, it seems like this is a negative connotation - is that accurate?

In addition to the opinions, there is a large body of science about inertia and resulting pedaling effectiveness.

That said, when you say “biggest issue”, it seems like this is a negative connotation - is that accurate?

Regarding the research, most of it unfortunately is protected in the scam of the current research model, but there are ways around those locked gates (I’m just not that familiar with them). But in general there are a few review articles that talk about pedaling effectiveness as a result of other parameters (seat height, cleat location, etc.). However, many of those articles are written by engineers with no real knowledge of cycling, or cyclists with no real knowledge of biomechanics principles. Either way, the results have to be taken with a grain of salt. That said, the general consensus was that heavy flywheels mask spots where pedaling effectiveness is at it’s lowest, and that long term this results is a decreased ability to properly synchronize and recruit musculature during times of heavy work. And you’re probably spot on with the point of diminishing returns (in either direction) - the further away from realistic, the less helpful.

I just got one to take to races tired of looking for somewhere to warm up.

With that said a team mate of mine had one for indoor training for a few weeks to replace is wheel on trainer and ended up returning it because he didn’t like how it worked out. I never got into specifics but he said it just couldn’t be his full time trainer because of it.

I have an Omnium Over-Drive as well as a Kinetic RoadMachine. There is no question that the RoadMachine has far more inertia than the Omnium, but after you have used the Omnium a few times you don’t really notice the lack of inertia.

I actually feel that the lack of inertia helps to highlight dead spots in my pedal stroke which helps me to pay more attention to proper pedaling mechanics. But this is entirely my own experience and not based on anything beyond observation of my own pedaling and training habits.

Also, I really like having the back end of the bike more free than a typical trainer. I find it easier to get out of the saddle and sprint, and I also find it more comfortable on those longer aerobic rides.

All of that being said, I love the Omnium. I ride during lunch break and have to set up my pain cave at the gym each day, so for me the Omnium made perfect sense. It is very lightweight, super fast and easy to set up, and provides plenty of resistance for any TR workout that I throw at it.

I was concerned about running out of resistance when I purchased the Omnium (they don’t really say where it tops out, but online I found mention of about 600 watts). I usually train on my cyclocross bike which currently has a 46 tooth big ring and an 11-28 cassette. With this gearing configuration I am able to hit about 900 watts during a sprint and I can easily do VO2 intervals at 350ish watts. The 900 watt sprint is where I start to spin out and run out of resistance, but that isn’t usually an issue. I don’t mean to sound like a jerk by putting my actual numbers in (I recognize and appreciate that I am the only person on the planet that actually give a hoot what my FTP is), I just wanted to give you some real world numbers since I was not able to find this info when I was researching the Omnium. But like I said, more than enough resistance for indoor needs.

FYI, if you are looking to get one, DC Rainmaker and Clever Training usually do a VIP sale some time in early May. The Omnium is currently $399.99 on Clever Training, so if you wait until the VIP sale it will be about $320. You have to be a VIP member, but if you use the DCR code it only costs $5, and that $5 is applied to your first purchase. This is how I purchased my Omnium, and it made for a great deal.

If you don’t want to wait until May than REI is having their members sale right now, which also gets you 20% off the Omnium. The only catch is that it retails for $430 at REI, so the sale price would be more like $345. Also, you need to be a member of the REI co-op to get the coupon.

I live overseas and train on a KICKR SNAP, but will be traveling home to the U.S. on paternity leave for 3 months. Yay!

I’m planning on getting the Omnium Over-Drive for indoor rides while I’m in the States. My biggest fear is not being able to accurately do the Ramp Test. Does anyone have any feedback in this area? Did it take some practice riding on the Omnium before you could do a good job on the Ramp?

How is it with a nobby mountain bike tire like a Racing Ralph? I’m thinking of the specific application of a pre-race warm up or occasional short session when travelling, not as an everyday trainer.

I’m eyeing up the Over Drive rollers, but if they don’t offer enough resistance for anaerobic efforts, it’s not worth it to me.

I use these during travel for around a week at a time and they’ve done well for me. With my cross bike, and 40t front chainring, I got up to almost 750W in a sprint. I can’t remember what cog I was in in the rear, but I don’t think it was the 11t. So with bigger gearing I think you can easily get up higher. But if you’re looking for over 1,000W I’m not sure you could.

Thanks I’m looking at the full on roller version, that input is useful! I don’t train sprint much inside so these might play!

I’d definitely get the resistance model (Overdrive) if you want to do any workouts on it. I’m not sure how high you get (watts) with the non-resistance model. I have the Overdrive and its great for traveling and before races. It’s also been forcing me to work on cadence modulation to hit the power targets.

Thanks! Since I’d be using it for traveling, I was worried about the possible weight difference.

Is eating tires anything I should worry about with this trainer?