This is the first post in a series where we’ll start to look closer at the power curves of certain trainers.

As far as I know, they all have the same resistance unit. 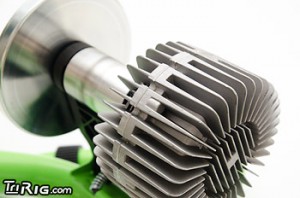 It’s a fluid resistance unit with a sealed chamber.  They use a special fluid that doesn’t change in viscosity as it heats up.  This is what makes it kick ass for VirtualPower. 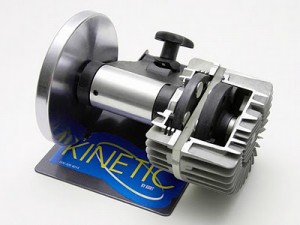 VirtualPower
So what does this all mean for VirtualPower?  Because their fluid doesn’t change in viscosity when it heats up you get a very consistent power curve during your workout. 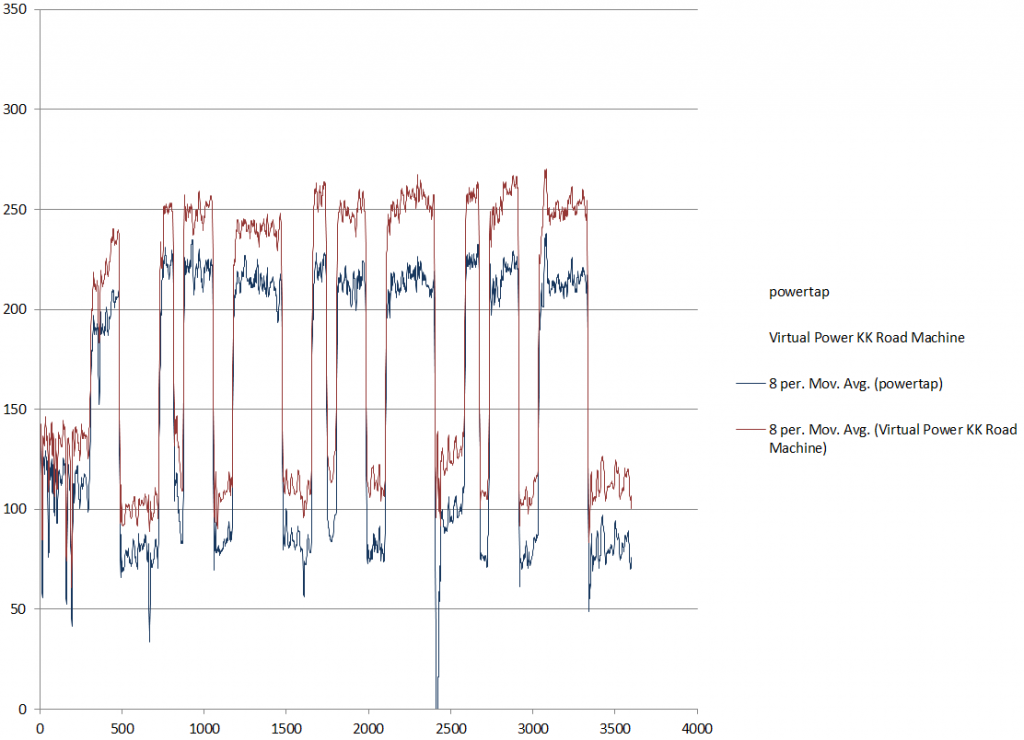 Here’s a workout I did with my PowerTap, which is a power meter that claims +- 1.5% accuracy.  The blue line is the PowerTap power and the red line is our VirtualPower which is calculated from speed.

For this setup I used a continental trainer tire at 120psi.  I cranked down my rear wheel 1.5 turns.

You can see that VirtualPower tracks really well with actual power.  Although VirtualPower is higher the entire ride.

This due to rolling resistance between the tire and the Kurt Kinetic drum.  We call this difference the y-intercept offset. 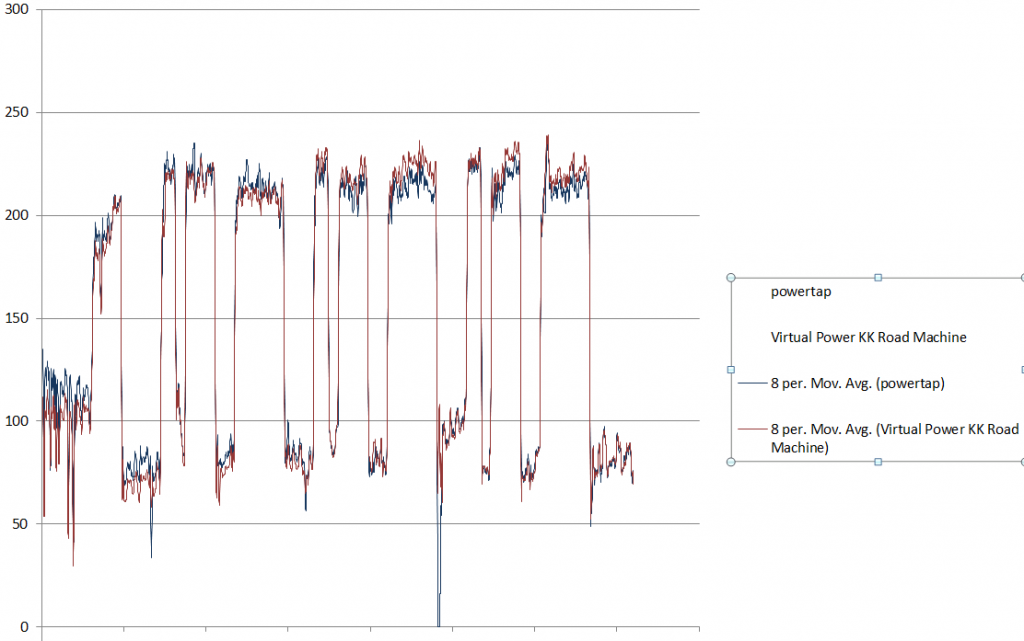 I threw my data into excel and changed the y-intercept offset by 30 watts.  When I did that, BOOM, VirtualPower and Power lock in.  There’s a little bit of difference in the first 5 minutes which I think is the rear tire heating up.  But after that it’s really close.  So close that the +-1.5% accuracy of the PowerTap makes these results even more compelling.

What does this tell us?

This tells us the Kurt Kinetic Road Machine works really well with VirtualPower.  I did the above test with the 3lbs fly wheel (blue model).  I talked to Kurt and they tell us that the power curve doesn’t change between the 3lb, 6lb and 12lb models.

If you’re holding a constant output, this makes sense.  You’re going to see some differences accelerating and decelerating. Because the 12lbs fly wheel has more mass it will take more work to get it spinning and it should stay spinning longer.  As long as you’re doing intervals of any considerable length you should be good to go with any configuration.

But….we’re still going to test the other fly wheels once we get our hands on them and publish them to the blog.  We like to double check our work ;).

So how tight should I get my rear tire?

I know what you’re thinking.  “Sweet, so you guys should be able to tell me how tight my rear wheel should be and I’ll be able to dial it in and have numbers that I can compare to power meters!”.

I can’t recommend that at the moment…here’s why.

It’s going to really depend on your tire, the tire wear and the PSI of your tires.  Tires have different rolling resistance and even with the same tire it changes over time.  I think as long as you use the same tire, pump it up to the same pressure and tighten the rear wheel down the same you’ll be able to use VirtualPower for training and get consistent power numbers.  But I still wouldn’t use it to compare to other people, even if everyone tightened down their rear wheel two turns.

We’re experimenting with roll down tests.  With that, we’d have you spin up to 25 mph and coast to a stop. We’d record how long it takes to go from 20 mph to 10 mph.

The problem with that is ANT only transmits your data every wheel revolution.  Although this doesn’t seem like much you can get a pretty big variation if you time it just when it passes 20 and 10 mph.

We haven’t given up hope yet though.  You can collect all the points between 22 and 8 mph and predict where it passed 20 and 10 mph.  With that we hope we can really dial in calibration and WE can add that y-intercept offset to the VirtualPower formula on the fly for you.

That’s pretty exciting because we could account for heat drift during a workout that happens in other brands of trainers.

We’re in the processing of purchasing a motor to hook up to a stationary bike.  With this we plan on doing repeatable tests to develop better power curves and help us with our calibration numbers.

The one problem we’re running into is how to hook the motor up to the cranks/bottom bracket.  Any machinists out there?  If you have any ideas let us know in the comments.

Nate Pearson is the co-founder of TrainerRoad. He is a father of two and an avid triathlete and cyclist. His training is fueled by great coffee, BBQ, and pie.