Echelon Riding 101 – An Intro to Riding in the Wind 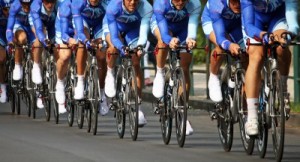 Regardless of which type of riding occupies your leisure time – and I’m assuming your time on the bike is mostly leisure time otherwise you’re a pro rider and unlikely to learn anything from this post you haven’t already been directly exposed to – learning how to best draft fellow riders is not only useful but invaluable in numerous situations. In fact, being able to effectively (more on this later) follow another rider’s wheel closely can be the difference between riding in a group and dangling off the back until you’re left entirely to your own devices & horsepower. As such, please allow this post to serve as a primer on some ways to improve your ability to draft another rider or group of riders.

First of all, while I don’t want to bog things down with descriptions of eddy currents, vortices, leading/trailing edges & dirty air, I think a brief, not-too-technical explanation of the physics behind drafting is a good way to get things rolling, and one way to illustrate the desired effects of riding a wheel would be to explain things in terms of hydrodynamics. Think of the last time you spent some time at the lake and sat perched in the back of a boat in full view of the small wake created as the water sluices around your vessel. 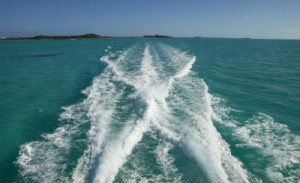 If you look closely, you’ll notice that the water immediately behind the boat creates a comparatively less turbulent pocket in much the same way a lead rider creates a pocket of air also referred to as a slipstream or draft. A following rider can slip into this current, or eddy, and work at a drastically reduced level of effort, and what’s even more interesting and not very well known is that the leading rider can even derive a benefit from the rider(s) directly behind him/her. Paul Doherty from San Francisco’s Exploratorium explains this pretty succinctly, albeit in horrible video resolution, by describing how the lead rider benefits from the way the following rider fills in the lead rider’s eddy. All of this is to say that two riders are always better than one when it comes to keeping the workload lower and the speed higher. And when you add even more riders to the mix, the workload falls further and/or the speed rises even higher.

So, without discussing percentages of effort reduction in great detail, let’s suffice it to say that placing yourself in another rider’s draft offers a substantial reduction in the amount of work you’re required to perform in order to maintain the same speed as the rider who’s charging through the air and working substantially harder than you are. Factors like wind angle, wind speed, the size & position of the lead rider, the road’s incline/decline & even the lead rider’s fluidity can all affect just how much relief you gain from drafting, but a ballpark range that seems consistent from resource to resource as well as in my own experience puts the work savings between 25-35%. You don’t need me to point out how huge those figures can be, especially when you’re falling apart at the end of a long ride or race while the rest of the group is drilling it home.

So how do you become an effective ‘drafter’ and to a lesser extent ‘draftee’? Let’s tackle what’s sure to be a greater concern to most of us who are admittedly (or secretly) less concerned with the wellbeing of other riders and more focused on our own performance and energy savings. To effectively draft another rider, you simply need to develop an awareness of the ever-changing ‘sweet spot’ which in the case of drafting is a term I use to describe that perfect placement where you’re neither dangerously close to the rider ahead of you but close enough to feel an obvious reduction in necessary power to the pedals. Unfortunately, this ideal position is as stochastic (to borrow a term from Coggan/Allen’s Training and Racing with a Power Meter) as your entirely inconsistent power output is should you be in the habit of watching your power meter’s display during a group ride or race – it’s all over the place. So our challenge as ‘drafters’ is to pay attention to the direction from which the wind is coming and adjust our positioning accordingly.

Headwinds are about as straightforward as wind gets and they make it pretty easy to determine where to line up relative to the rider in front of you, but we seldom deal with direct headwinds because we seldom ride in a straight line. And when was the last time the wind blew at the same angle for any lengthy period of time? I sure as hell can’t remember. But it does happen and it’s your cue to place your front wheel directly in line with the rear wheel ahead of you. How closely you trail that rear wheel often boils down to a combination of two things: how experienced a rider you are and how desperately you want or need the draft. And I wish I could offer some secret insight into how you narrow a 2-foot margin to a 2-inch margin, but I can only tell you that the necessary components are relaxation, experience & trust; more on these in a moment. Each component is far from secret, but they are each entirely necessary if you ever plan to stick to wheels like gum sticks to shoes.

Now anything that isn’t a headwind falls under the category of crosswind. Whether it’s coming from behind or ahead, at a sharp angle or a subtler one, any wind that isn’t hitting you straight in the face is a crosswind and makes the act of drafting instantly more complex, especially if you’re riding in a decent sized group. On more instances than I can count, I’ve heard the term “echelon” bandied about but I know for a fact that many riders have no idea how to properly form an effective echelon much less how to modify one as the wind or route changes direction. But this topic could could be a post all on its own, so I’ll just briefly describe an echelon as the position a paceline assumes when each rider lines up in a crosswind’s sweet spot. Clear as mud?

Imagine a boy/girl/boy/girl paceline of four riders negotiating a crosswind coming from their right shoulders which puts it diagonal across their bikes & bodies creating a wake on the other side of their left hips. It’s inside this wake on the left hip of the lead boy where the rider closest behind him will line up. Then the rider behind her will line up on her left hip, the rider behind him on his left hip, etc. This creates a diagonal string of riders – assuming the road will allow it – that you’ve undoubtedly seen in a flat, windy stage of something like the Tour de France. And because a road can only accommodate so many riders riding side-by-side to varying degrees, larger groups often break into multiple echelons which can get really complicated and put every leader of every echelon directly in the wind.

Now back to the 3 components necessary to effective drafting. When I give advice on the road, I first tell riders to relax by softening their elbows, dropping their shoulders, loosening their grip on the bars, and even relaxing their jaws. In fact, I’ve given this same advice to countless riders indoors as well, all in hopes of conserving energy during interval workouts but also in an attempt to foster indoor habits that carry over to outdoor riding. Once a rider can truly relax, everything else falls into place – you’re not jarred into grabbing your brakes by a slowing rider, you’re not focused on all the bad things that could happen, and if, heaven forbid, you rub shoulders or wheels with another rider, you’re much less likely to go rigid with fear and come crashing to the ground in a pile of carbon & body parts.

The second component is experience and it’s rather obvious how repetition and familiarization bring with it the skill necessary to confidently ride within a few (or less!) inches of the rider in front of you. So probably the biggest challenge of all 3 components is learning to trust the riders around you. It’s one thing to put faith in teammates, friends, or group-ride regulars whom you’ve ridden with previously and had the opportunity to experience firsthand how well or poorly they handle themselves in a group. It’s entirely another to line up for a race with 100+ strangers and blindly accept that each rider will provide a safe (relative term, right?) wheel to follow. And how about a 50mph descent down a mountain highway with these same strangers in too-close proximity!?

My advice to you is to bear in mind the same reminder I repeat to myself over & over again in these situations: nobody wants to crash, nobody wants to crash, nobody wants to crash. Simply trust that everyone else in your group, be it large or small, has the same desire to remain upright with all of their skin intact. And typically, as rides unfold and you’re striving to effectively place yourself in the draft of other riders you’ll find that some wheels are better than others – more relaxed riders who make fewer sudden moves, riders who slow less and calmly move into the wind rather than braking, riders who are visibly relaxed and almost infect you with their confidence and in-control manner. Over time, trusting others becomes more an act of trusting yourself & your capabilities because when it comes right down to it, our own actions are the only ones under our control. Put another way, “you worry about you, I’ll worry about me.”

When I next continue this topic, I’ll discuss how to properly rotate through various types of pacelines as well as how to trade work with a very small group of riders. Until then, train hard, ride smart, have fun.