An update on VirtualPower for the CycleOps Fluid 2

We’ve changed the formula for this trainer twice now based on feedback from users so I thought I’d write a little bit on why we’ve changed it and how good we think the new formula is.

The first version was based on a ride I did with my Powertap. Other users with power meters reported that they were getting numbers much higher from their power meter than what VirtualPower was displaying.

So we changed the formula to one published by Kurt Kinetic here: Kurt Calibration chart. It matched up pretty well with a sample ride from a user using a Quarq power meter. You can see in the chart below how the purple and blue curves are pretty close up to about 17 MPH, which is how I was fooled into thinking it was a good fit.

However, people commented that the power they were seeing for faster speeds seemed way too high. So I plotted out a few of the curves and it became pretty apparent that the formula from Kurt was way off above about 17 MPH.

Someone pointed me to the CycleOps website and their power graph for the trainer. The resolution is pretty low but by sampling some points I was able to derive a formula that matched their curve pretty closely. And as one more source, I plotted the formula in the SportTracks Trainer Power plugin. The curve I came up with was really close to the SportTrack plugin.

So last night we updated the formula to match the SportTracks plugin.

Here are the watts for given speeds 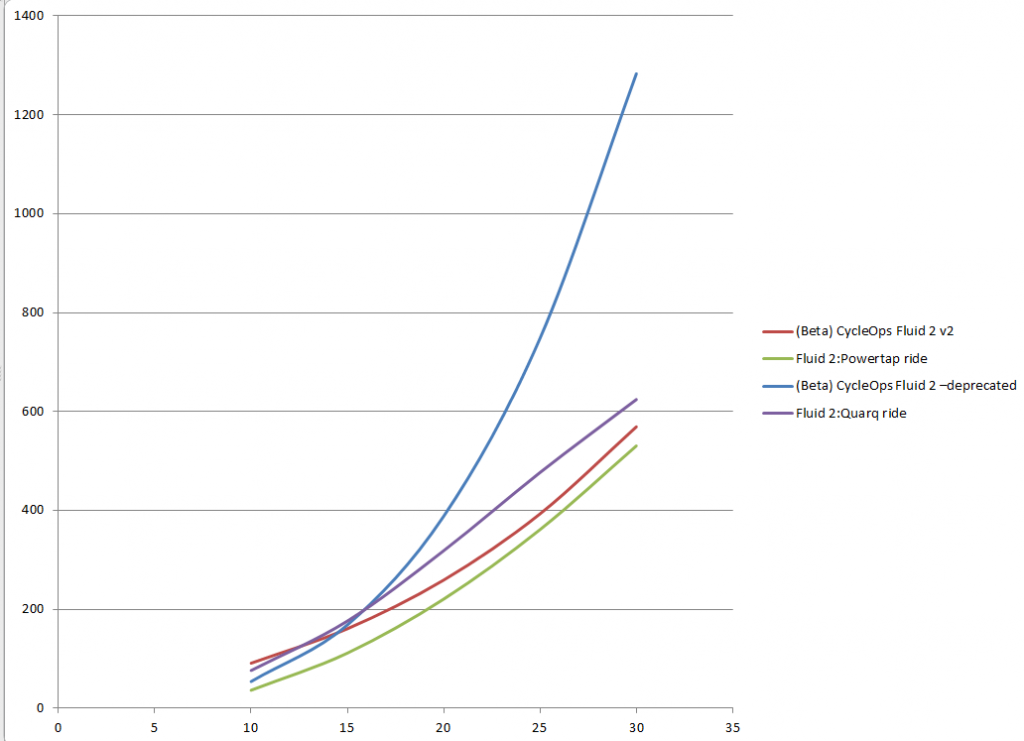 I’m confident that the new formula is better, but I’m not confident that you’ll get accurate power numbers with the Fluid 2. If you are consistent with your set up (same tires, PSI, and trainer tension) and base your FTP on the results from an 8 minute or 20 minute test using the new trainer profile, I think you can still use it to train effectively with TrainerRoad.

We’ve also had reports that the new formula shows higher numbers than the iBike, but I believe the iBike is essentially doing what we are doing (converting speed to power) so I don’t want to try to calibrate to that. I haven’t found the formula that the iBike uses to calculate speed on indoor trainers or anything on how accurate it is.

We have aspirations to create something like this to do some calibrations of our own, which should help us verify our formulas. But even that won’t help if the power curve varies from trainer to trainer or external variables like tire, PSI, and tension on tire have such a large effect on the curve that they can’t be canceled out with consistent set up. Notice how the Powertap ride curve is pretty much shaped like the new formula but the curve from the Quarq ride is shaped quite differently so even a simple offset wouldn’t help there.

If you have any theories on how to get more accuracy for this trainer or explanations on why we aren’t seeing more consistent results, post them to the comments.

We’ll continue to work towards getting power data as accurate as possible with VirtualPower on TrainerRoad.

Thanks to blueraidermike and IronCroptop for your help and feedback on this issue.