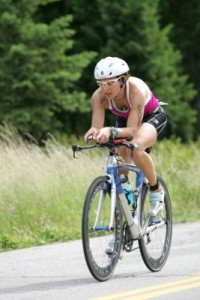 We’ve already had a number of questions with regards to adjusting the new 40km time trial plans to a triathlete’s racing schedule. Both sprint triathletes and international distance triathletes have asked how to tailor the programs to a season that’s already well under way while the Ironman and half-Ironman athletes have asked how also to incorporate longer training rides into their training weeks as they work toward bike segments which are substantially longer than 40 kilometers. So here goes…

As far as a shorter-distance triathlon season goes, if your target event is inside of the 12-week training plan structure, plan modifications will be dependent upon your incoming level of fitness. For those riders who haven’t yet begun a Build phase of training, leapfrogging a couple weeks into the plan might prove too big of an initial jump in training stress – and it might not. So it’s going to be each rider’s call as to which week she/he will begin with. Simply count back from your key event to determine if the training plan reduction is acceptable and begin there, e.g. week 3 instead of week 1. If not, simply start the plan from week 1 and come what may. You won’t finish the plan in its entirety, but you can still include the taper week & peak week with some fine tuning of those final weeks based on how many weeks you managed to squeeze in prior to them.

For those shorter-course multisport athletes who are in the midst of a Build phase, trimming the 12-week plan down to fewer weeks is likely to be less of a challenge and will ideally just pick up close to where their current Build plan left them. Make sure you still budget properly for those final two weeks in order to include your taper & peak weeks.

So while these workouts are tailored with the aim of specifically improving 40km time trial time & power, a little of the aforementioned tweaking along with some responsive training (next Tuesday’s blog post) on your part should allow for equally impressive improvements regardless of your bike segment distance – increases in peak, sustainable hour-power will trickle down to all power levels below it, arguably some above it.

Best of luck to you all. Train smart, ride hard, have fun!